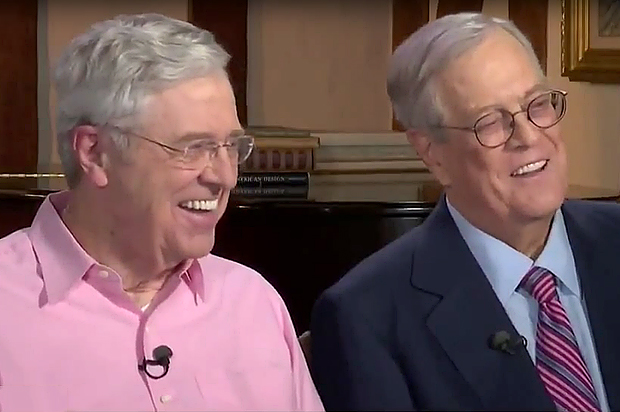 Conservative groups are throwing millions of dollars behind a campaign to sell the American people on how comprehensive tax reform will improve their lives.

Members of Charles and David Koch’s “Liberty Network,” Freedom Partners and Americans for Prosperity (AFP) are pledging millions to a nationwide campaign that promotes tax reform. The effort will include town hall meetings, door-to-door canvassing, phone banks and media buys.

“We have a tremendous opportunity to unite behind a positive vision to pass comprehensive tax reform that will help people improve their lives, and un-rig the U.S. economy. But we need to start making the case to the American people now to successful,” Executive Vice President of Freedom Partners, James Davis, told The Daily Caller News Foundation. Freedom Partners and AFP are trying to be “part of the solution,” Davis said.

The group’s proposal looks similar to the one that President Donald Trump revealed late April. Trump’s push for tax reform marks the first attempt to overhaul the U.S. tax code since former President Ronald Reagan in 1986, and includes features that the president floated on the campaign trail.

Like the president’s plan, Freedom Partners and AFP recommend that Congress cut tax rates, shrink the number of brackets and eliminate loopholes and deductions for the wealthy. (RELATED: Trump Reveals ‘Biggest Tax Cut’ In U.S. History)

Freedom Partners and AFP’s proposal does not include a Border Adjustment Tax (BAT), which the groups believe to be a tax on consumers. CEO of Koch Industries Charles Koch and his affiliated network stood opposed to Speaker of the House Paul Ryan’s push for a border adjustment tax.

To achieve Trump’s ambitious proposal, Ryan is pushing for a BAT tax that would levy a 20 percent tax on imports. It would allow U.S. companies to deduct the cost of goods made in America, but not ones made in foreign countries. It also would reportedly raise over $1 trillion in federal revenue over the next decade, a much needed sum to finance the government while simultaneously slashing business and corporate tax rates by 15 percent.

The White House is currently embattled in an investigation into Russian ties with the Trump administration and the fallout regarding Trump’s termination of former FBI Director James Comey. Adding to the administration’s woes, Deputy Attorney General Rod Rosenstein announced Wednesday that he is naming former FBI Director Robert Mueller as special counsel overseeing the Russia investigation.

Congress currently has its hands tied trying to pass some version of the American Health Care Act (AHCA), which would mark the major legislative achievement of Trump’s presidency. The AHCA is up for debate in the Senate, where Republicans are finding little to no compromise on key pieces of the bill, like funding the Obamacare Medicaid expansion program. (RELATED: GOP Senators Can’t Agree On Medicaid)

The effort by conservative groups to rally support behind tax reform could prove beneficial for members of Congress in selling a reform package to their constituents down the road. On the other hand, the push could fall flat if Congress is unable to pass health care reform, which the president says must come before tax reform. The investigation into the administration’s relationship with Russia could also prove problematic in gaining support behind tax reform.

EDITOR’S NOTE: Robert Donachie is a former Associate for the Charles Koch Institute class of 2016-2017.