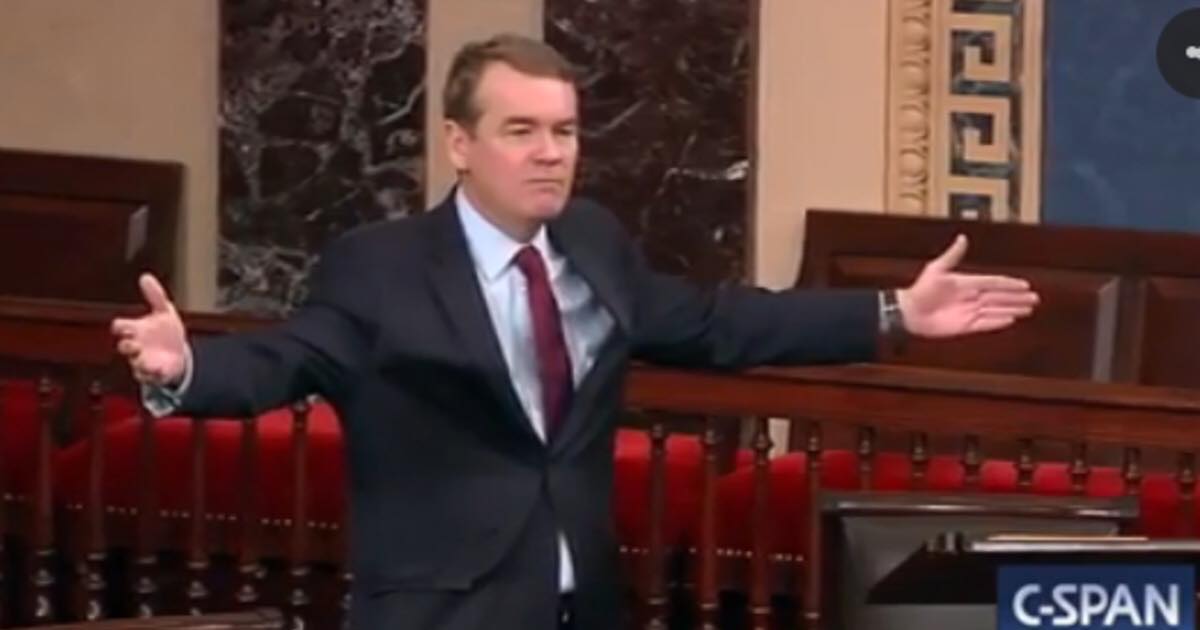 On Tuesday, January 24, Ted Cruz had just given speech about how “The only thing that is necessary to pass a clean bill paying the salaries of every man and woman in the Coast Guard, is for the Democratic Senators to withdraw their objection. Is that correct?” he asked rhetorically.

What Cruz wasn’t ready for was the Senator from Colorado.

It was at this moment Senator Michael Bennet rose, and calmly stated “I seldom rise on this floor to contradict somebody on the other side, I have worked very hard over the years to work in a bipartisan way, with my Republican colleagues.” The Senator then got incredibly heated and emotional when detailing why Senator Cruz is being hypocritical with his “crocodile tears” when Colorado was flooded in 2013, “this government was shutdown for politics! That he (Senator Cruz) surfed to a second place finish in the Iowa Caucuses!”

While I, like most liberty minded people, am okay with the government being shutdown, as I believe charities and individuals can take care of people far better than the government can, it gets really good when Senator Bennet starts to criticize “a medieval barrier on the border of Texas.”

If you don’t know what he’s implying he is speaking of “The Wall.”

At this point he brilliantly mentions “using eminent domain to build that wall.” He hits the nail right on the head using this as a criticism. I very rarely see any Democrats arguing this point, but they should use it that much more often. Eminent domain is by far the greatest violation of property rights used by the government. Forcefully taking ones property, without consent no matter how much is given to them, is the talking point I have used to talk several people out of supporting the wall. If Democrats truly want to win that fight they need to use this argument far more often instead of just commenting on how “Trump is racist” and the such.

The Senator from Colorado then tackles the national emergency that Trump has suggested using. He passionately had this to say, “Why he supports a President who wants to declare and unconstitutional emergency to build that wall!”

This is what I am talking about. The Democrats need to start tackling the wall from a more conservative stance. That being that the state of emergency is unconstitutional, you must violate property rights to build the wall, and he finally brings up a fiscal stance as well. Not one that I can necessarily get behind, but something that Trump promised to the American people.

“Which brings to me to my final point! How ludicrous it is that this government is shutdown over a promise the President of the United States couldn’t keep!” The main reason he brought this up, is because Trump often promised Mexico will pay for the wall. “The idea that Trump would have the Mexicans pay for it isn’t true! That’s why we’re here! Because he’s now saying the taxpayers are going to pay for it!”

Bennet mentions more about some of the insults Trump directed at Cruz, but I will let you watch the clip yourself if you’d like to view that.

All in all, Democrats need to take notes from Senator Bennet. While he may have just been political grandstanding, the arguments he brought forward were absolutely excellent for convincing more conservative minds to no longer support the wall.

Petition for Trump to Punch Nicholas Sandmann in Face Surfaces on Change.org