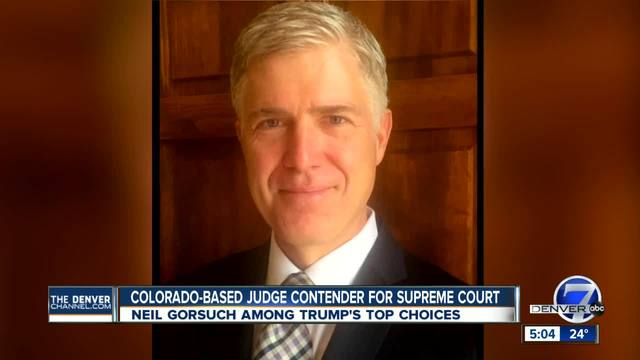 The Independent Journal Review (IJR) is reporting that, based on the confirmation from two Trump administration sources, Colorado Judge Neil Gorsuch will be nominated by President Donald Trump to be the next Associate Justice of the United States Supreme Court.

Speaking on background, an administration source instrumental to the SCOTUS selection process tells IJR, “Yes. It is Gorsuch. 100 percent. The Hardiman thing is a head fake.” Thomas Hardiman is the other Judge Trump was considering for the vacancy, who is also in Washington, D.C.

A second source within the Trump administration confirmed IJR’s reporting.

Gorsuch, currently 49 years old, would become one of the youngest SCOTUS appointments in history. The Colorado native attended Harvard Law with former President Barack Obama and is a firm Constitutionalist, says IJR.

Gorsuch has the typical pedigree of a high court justice. He graduated from Columbia, Harvard and Oxford, clerked for two Supreme Court justices and did a stint at the Department of Justice.

Gorsuch had worked in the Justice Department under former President George W. Bush, prior to being appointed to Denver’s 10th US Circuit Court of Appeals, a post he will vacate should he accept the nomination for SCOTUS.

Should he be appointed, Gorsuch would follow in the footsteps of the late Justice Antonin Scalia, as he has come to be known as a “textualist,” or someone whose interpretation of laws is based on the actual text rather than trying to decipher the “intent” of lawmakers or other potential consequences.

“Judges should instead strive, if humanly and so imperfectly, to apply the law as it is, focusing backward, not forward, and looking to text, structure, and history to decide what a reasonable reader at the time of the events in question would have understood the law to be,” Gorsuch said in a speech to Case Western Reserve University’s law school shortly after Scalia passed away.

Further, Gorsuch can also be described as a constitutionalist and adheres to “originalism” when interpreting the U.S. Constitution. In other words, he believes the Constitution should be interpreted as America’s Founders intended, reports IJR.