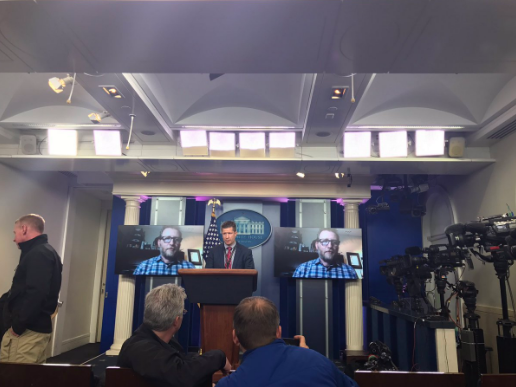 The White House has announced the first four people selected for the launch of “Skype seats,” aimed at allowing individuals outside Washington, D.C., to participate in the daily White House press briefings, reports The Hill.

Kalunian interviewed Spicer, a Rhode Island native, shortly after he got the press secretary job.

“Not sure how she snuck in there,” Spicer joked.

“I look forward to virtually welcoming them to the briefing room,” he added.

The decision to allow outside media into the White House was announced last week during his first official press briefing. It was mentioned that in order to be considered for a Skype seat, a media member would need to live more than 50 miles from Washington.

The idea, according to Spicer, was to open up briefings to a “diverse group” of journalists who can’t afford to travel to DC.

“Maybe we solicit talk radio and regional newspapers to submit questions — because they can’t afford to be in Washington — but they still have a question,” Spicer said in an interview Jan. 8.

“Maybe we just let the American people submit questions that we read off as well,” he added.

The admittance of questions from someone outside of the Press Briefing room in the White House would be a first for any administration, says The Hill.