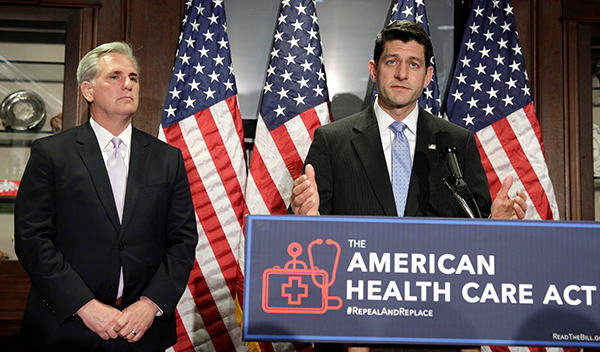 Fourteen million more people would become uninsured next year — and a total of 24 million more by the year 2026 — if the top Republican proposal to repeal and replace Obamacare is signed into law, the Congressional Budget Office estimated Monday, reports CNBC.

The American Health Care Act (AHCA), backed by House GOP leadership, and President Donald Trump, would effectively wipe away all Obamacare’s growth in coverage over the next decade, CNBC explains:

The loss in coverage projected for next year if the bill is enacted alone equals about 70 percent of the 20 million or so people who have gained insurance coverage as a result of the Affordable Care Act, as Obamacare is more formally known.

The total loss in coverage over the next decade would wipe out Obamacare’s gains in coverage, and then some.

In better news for Republicans such as Speaker of the House Paul Ryan, the AHCA would, according to the CBO’s report reduce the federal deficit by $337 billion over the next decade,  CNBC reports. A number which is roughly 1.7% of the national debt ($337B/estimated $20T debt).

When it comes to the cost of individual premiums, CNBC  reported that the CBO estimates that in next year and in 2019 would be on average by 15 to 20 percent higher than what they would be under Obamacare. But by 2026, average premiums would be about 10 percent lower than they would be if Obamacare remained intact, the office said.

The CBO report is a mar to the House GOP leadership’s attempts to shuttle along their plan to replace Obamacare and it looks to be cited by Democrats, and the principled conservative wing of the GOP to stall and amend the bill.

In response to the report, many in the Trump administration have spoken out and taken aim at the CBO’s lack of accuracy over time. White House Press Secretary Sean Spicer said, “If you’re looking to the CBO for accuracy, you’re looking in the wrong place.”

Mick Mulvaney, director of the White House Office of Management and Budget, said, “If the CBO was right about Obamacare to begin with, there’d be 8 million more people on Obamacare today than there actually are.”

“Sometimes we ask them to do stuff they’re not capable of doing, and estimating the impact of a bill of this size probably isn’t the best use of their time,” Mulvaney said.

With all the contention from the House Freedom Caucus, and Senators Rand Paul, Ted Cruz, and Tom Cotton, it is becoming increasingly more difficult to imagine the AHCA becoming law without major amendment.