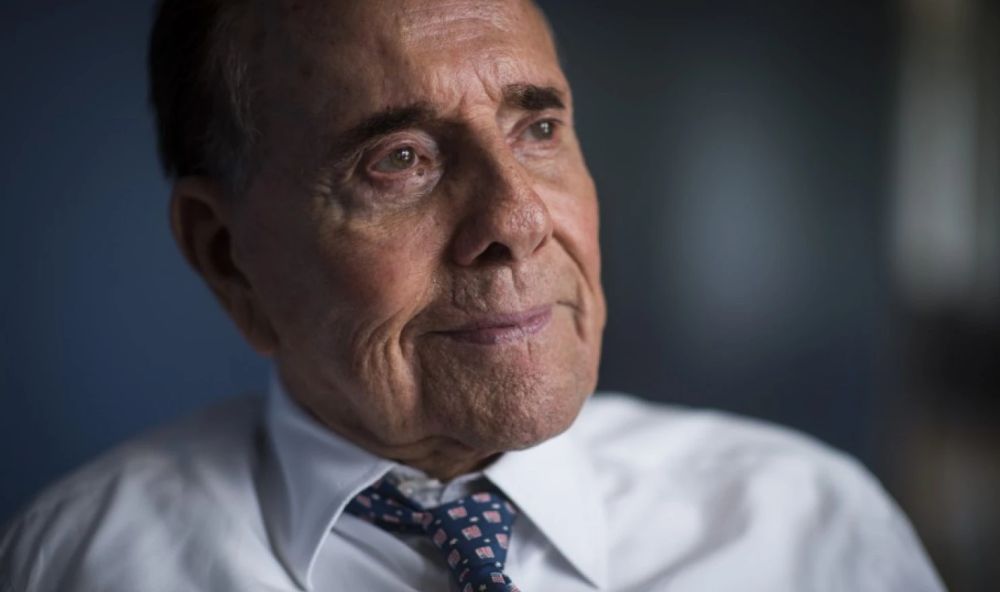 The all but forgotten Bob Dole poked his head out of obscurity yesterday to offer his endorsement of Donald Trump, following in the footsteps of Sarah Palin, another GOP figurehead who is in no place to offer electoral advice.

By contrast, the only thing that could make Sarah Palin’s swan dive-like performance as John McCain’s running mate look less painful could be Bob Dole’s highly mocked and ridiculed run against Bill Clinton in 1996.

Bob Dole, in many ways, was the beginning of the GOP’s acquiescence to the idea that only a moderate nominee could defeat a charismatic liberal candidate offering up free goods from the public treasury. But Dole proved to be better fodder for late night comedians than he did a candidate who could excite support.

Dole was crushed, losing to Clinton by 120 electoral votes and almost 10 million popular votes. And the GOP came around, nominating George W. Bush in 2000.

Say what you will about George W. Bush; label him a neocon, deride him over the bailouts, Medicare Part D, or the ill-thought wars in the Middle East. But George W. Bush in 1999 campaigned and was elected as a genuine limited government, free market conservative. I’m not here to debate the record of the Bush administration — only to demonstrate that in 2000, after nominating a moderate, the party chose to nominate a conservative from Texas who did excite the party the base and did win the presidency.

But after Bush, the party decided to once again nominate a middle of the road, moderate Republican in Senator John McCain. The party encouraged everyone to line up, ensuring voters that McCain’s moderate positions were worth it overall if it meant winning the White House. Of course, we all know that didn’t pan out.

And who was telling conservatives and constitutionalists to put aside their values and support John McCain? Sarah Palin, of course — his chosen Vice President. For those who don’t remember, the Sarah Palin vice presidential candidacy was a nightmare. She fumbled through speeches, gave idiotic answers to questions in interviews, demonstrated complete ignorance of the issues at hand, and embarrassed herself and the party. Palin, in many people’s opinion, was toxic to the Republican brand.

In 2008, the party once again told us we needed to nominate a moderate candidate from the mushy middle. Mitt Romney fit the safe mold they were looking for. Surely, if bland and boring, liberal-leaning Mitt could win governor’s elections in liberal Massachusetts, he could win the presidency! Only not…

Once again the moderate candidate failed to energize the base and failed to win the presidency. We got four more years of an unpopular president because GOP leaders told everyone that Mitt Romney was a sure-fire win. Now these same failed prognosticators, pundits, and politicians alike are telling us that Donald Trump is the only man who can win.

Never mind his shady history, his record of financing liberals like Hillary Clinton and Nancy Pelosi, his past praise of socialist healthcare, and his open hostility towards free trade. Never mind his liberal record, his inability to handle simple questions, or his bully-like persona — people are going to love Trump! The GOP assures us of this!

The GOP parade of presidential losers and those that sold them to us can tell us all day that Trump is the man, but I say it’s time to ignore them and do what has been proven to win us elections: nominate a true, limited government, pro-free market conservative candidate. Those who will tell you it’s time to sell out your principles before even a single vote has been cast are not looking for a GOP victory. They’re looking to jump on a bandwagon, and in some cases, they’re looking to make some money.

Dole and Palin see what Trump 2016 really is: a chance for them to take one last dance in the spotlight; maybe Palin can even score a book deal or a new reality TV show. Whatever her motivations, it has nothing to do with what’s best for the Republican Party or the United States.

FACT CHECK: Ron Paul DID NOT Say Trump Will Be Nominee

Trump’s Pandering to the Ethanol Lobby is Bad for Taxpayers