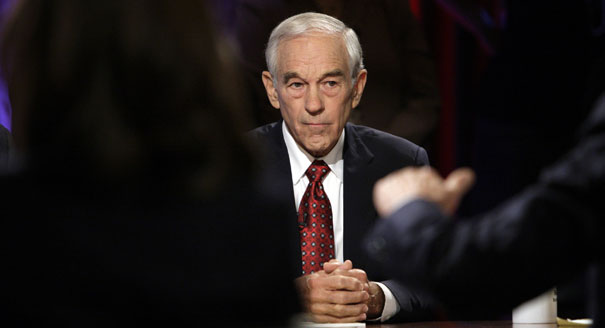 On Wednesday, Ron Paul was interviewed by Steve Malzberg of Newsmax. One of the highlights of the discussion was when the host asked three-time presidential candidate Dr. Paul about the 2016 presidential election.

Malzberg asked, “Realistically, is Trump going to be the nominee at this point?”

To which Paul responded that though “At this point, it certainly is realistic,” he did not feel comfortable setting odds, and that “If I had a limited sum of money. . . I probably wouldn’t invest a whole lot.”

The former congressman went on to note that “There hasn’t even been a vote cast; it’s all been done by polling which, for the most part, it’s generally rigged.” Paul also spoke of his son Rand Paul‘s odds, explaining that “I think he may well surprise everyone, because he has a good organization and caucus states are different. That’s where we always did well.”

Somehow, the above was marketed Wednesday night and Thursday morning under a variety of titles, including, “Ron Paul admits Donald Trump, not his son, will probably be the GOP nominee” and “Ron Paul Walks On Rand, Says Donald Trump Will Likely Win The Nomination.”

As Nick Gillespie of Reason points out, this is far from an accurate portrayal of Paul’s statements. Not only did Dr. Paul not compare Trump’s chances to the younger Paul’s chances, he explicitly stated that he had little faith in being able to predict who the eventual nominee would be. Perhaps most importantly, the statement by Paul was that it is realistic that Trump could be the nominee, which is a much lower burden than probability or plausibility.

This unnecessary media firestorm led to Dr. Paul releasing another statement Thursday, explaining, “As usual the media can’t get anything right. I responded to a poorly worded question, agreeing that it was ‘realistic’ at this point that Trump could win, not that he will win. In fact, I then proceeded to say not one vote has been cast and this has all been trumped up by the media and rigged polls for entertainment. Rand is going to surprise everybody because freedom is popular and when it matters voters won’t cast their lot with an authoritarian like Trump.”

This is certainly not the first time during this election cycle that the media has misrepresented words and events in an attempt to split the Paul family. One story explained the “tragic rift” between father and son, suggesting that Ron did not wish to run for president in 2012 until he learned that Rand wished to pursue the office. Of course, this coincidentally coincided with BuzzFeed reporter McKay Coppins‘ release of a book going into further detail about the Paul family squabbles.

Other publications have stated that Rand has “flopped” as Ron Paul’s successor and that some of the elder Paul’s disciples have lent their support instead to candidates like Ted Cruz. Some news sources have questioned Rand’s ability to escape Ron’s shadow.

The truth of the matter is that those who know the Paul family best have stated that the differences between the two men are few and far-between. Particularly over the last few weeks and months, Ron Paul has arduously fought for his son in the media, defending against those who suggest that any candidate other than Rand is willing to fight as forcefully for constitutional rights and individual liberty. There are even some murmurs of a “special guest” who will join Rand on the ground in Iowa in the final days of January, which would seem to very likely be the 2012 third-place finisher in those same Republican caucuses.

In short, the media attempting to drive a wedge between Ron and Rand Paul is nothing new. However, it is surprising that they have gone to such extreme measures — in this case, completely perverting Ron’s words — to do so.

Illinois Republicans Argue Chicago Too Incompetent To Manage Its Own Schools

Bob Dole, Sarah Palin and the Tradition of Losing Through Moderation