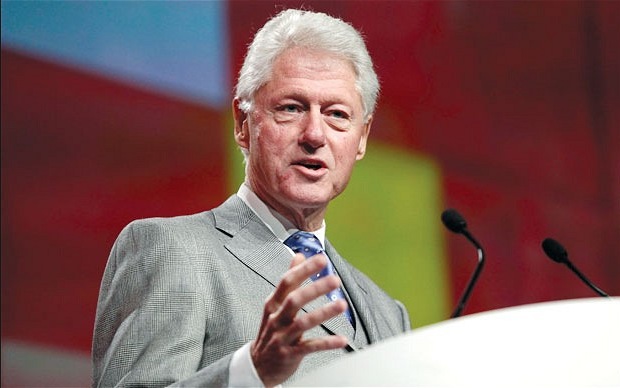 Bill Clinton did something that politicians rarely do. He admitted he was wrong.

Clinton spoke to a crowd at the National Association for the Advancement of Colored People Wednesday and addressed his 1994 crime bill, admitting he made a mistake with the legislation.

“I signed a bill that made the problem worse,” Clinton told the audience in Philadelphia. “And I want to admit it.”

The crime bill was a bipartisan effort to address spiking violent crime rates during what Clinton called “a roaring decade of rising crime.”

Clinton’s statement is important because it contradicts the typical party narrative on criminal justice reform. While democrats like to say they want to fix problems that tough-on-crime Republicans created, Clinton’s admission shows that many of the criminal justice problems today are a result of policies that had broad bipartisan support only a few years ago.

“In that bill, there were longer sentences,” Clinton said. “And most of these people are in prison under state law, but the federal law set a trend. And that was overdone. We were wrong about that. That percentage of it, we were wrong about. The good news is we had the biggest drop in crime in history. The bad news is we had a lot people who were locked up, who were minor actors, for way too long.”

The crime bill has since been criticized as too tough on petty crime, unnecessarily incarcerating too many people, which led to ballooning prison populations that require more of the budget — not to mention recidivism rates among criminals and convicts freed from prison.

“Those who want to blame conservatives for our incarceration binge forget that Democrats gladly went along with it,” Molly Gill, Government Affairs Counself for Families Against Mandatory Minimums, told The Daily Caller News Foundation. “It was bipartisan overkill, and it’s going to take bipartisan agreement to get re-balanced. Mandatory minimum sentences have been a bipartisan, expensive, ineffective big government program, and it’s good to hear everyone, left and right, admitting it.”

Clinton made similar statements in an interview with CNN earlier this year.

“We wound up … putting so many people in prison that there wasn’t enough money left to educate them, train them for new jobs and increase the chances when they came out so they could live productive lives,” Clinton said.

Now, advocates are finally gaining steam on a series of reforms.

The SAFE Justice Act was introduced last month and is a wide-ranging reform bill that has bipartisan Congressional support and endorsements from conservative and liberal groups. The bill would reduce sentences and help with the reentry process after serving time.

“The bipartisan solution is fewer mandatory minimum sentences, cheaper alternatives to prison that address drug addiction and mental health, and better policing,” Gill told TheDCNF. “Every criminologist knows that short, certain sentences and smart policing are better at reducing crime than long mandatory minimum sentences. People in both parties are getting that message – now it’s time to pass a bill.”