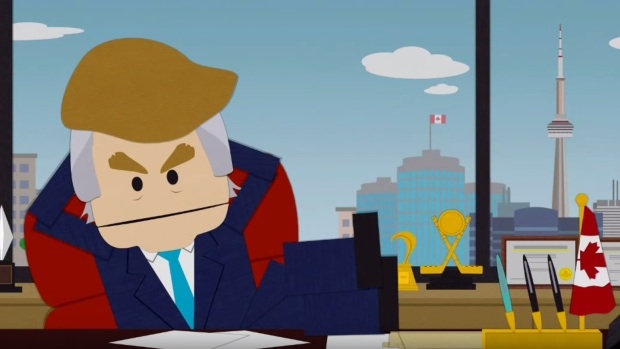 Hey there, America. It’s Canada. You know, the folks just north of you.

And, yeah, I get it. Canadians just elected the political equivalent of a Kardashian. That was dumb, but he’s completely harmless. Justin Trudeau couldn’t hurt a fly. This Donald Trump you folks have though… he’s dangerous. The way he constantly feels the need to defend his ego and cut down others is not presidential, and it could be a threat to our very existence here in North America. It’s one thing that he’s doing this with other GOP candidates, but what if this were Vladimir Putin? What if it were Kim Jong Un? These tyrants won’t just return the insults —  they’ll return nuclear warheads.

Furthermore, we remember the last time that someone came along spewing racist rhetoric and promising to make his country “great again”. See, we were there from the very beginning. We didn’t wait until we had a naval base bombed. We remember what it looked like when Adolf Hitler first came along. It looked exactly like Donald Trump. I see that scoff you’re making right now, but bear with us here. We’re not saying that he’s going to commit mass genocide, but there are parallels. If anybody had mentioned to Hitler supporters early in his campaign that he was a fascist, they would have scoffed too. Donald Trump has promised to create a national registry of Muslims. He’s also promised to ban Muslims from entering the country. Just replace “Muslims” with “Jews” in the previous two sentences — sound like anyone the world remembers? Another big promise of Trump’s is to change libel laws so he can sue anyone who speaks badly of him. This sounds like every fascist dictator the world has ever seen.

Yeah, yeah — “You’re Canada. Your opinion doesn’t matter. You can’t even vote!” This is true. We can’t vote. However, our opinion, and the rest of the planet’s, does matter. You see, America is the stabilizing force in the world. If America falls into the hands of a fascist like Donald Trump, the entire world will be in trouble. I don’t know when you last looked at a map, but we share a border. Our major cities are all pretty close to that border. If you allow this man to become your president, and he starts enticing the Vladimir Putins and Kim Jong Uns of this world to attack the United States, Canada will suffer as well. If you elect this guy, it will be Canada who’s building a wall on our southern border.

We love America. We really do. We don’t think you need to be “great again” —  you’re already great. As much as we do love you, if you elect this fascist, Donald Trump, we’ll have to go our separate ways. There just won’t be any other way to work things out. We’ve talked to the rest of the world, and they agree as well. Take a deep breath. Realize what you’re actually doing. Now get up, and stop this guy from ever running your country.

Forever Yours (unless you elect Donald Trump),

Four Reasons Why Modern Girls Are So Selective