Yesterday was one year to the day until “Spider-Man: Homecoming” hits US theaters, and the cast and crew are currently hard at work to get the film made. To help tide fans over until the release of official images and trailers, Spider-Man actor Tom Holland, who gave a scene-stealing performance in “Captain America: Civil War,” posted the above image of himself in the costume on the film’s set.

Holland hopefully has a better time playing Spidy this time around, however. He recently confessed his first outing in Spidey’s suit was less than comfortable.

Sadly, I have to say it was a little disappointing. My stunt double at the time was a little taller than I am, and I had to wear his suit because they didn’t have one for me! So it was kind of baggy the first time I tried it on, and it wasn’t as cool as I hoped!

Well the suit certainly looks snug in this photo!

Excitement will surely continue to mount over the next year, as more information and images are made available, leading up to the film’s July 7, 2017 release date. Stay tuned with TLR Pop Culture for any further decelopmemts. 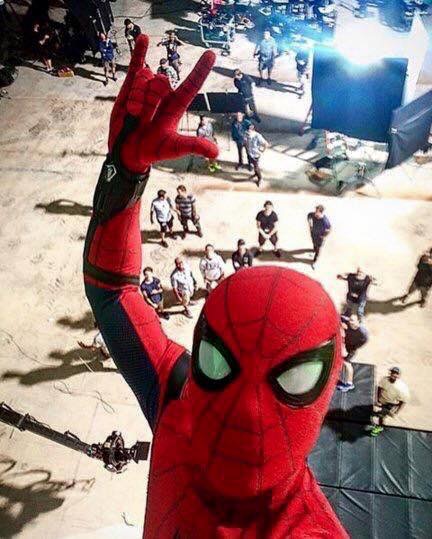