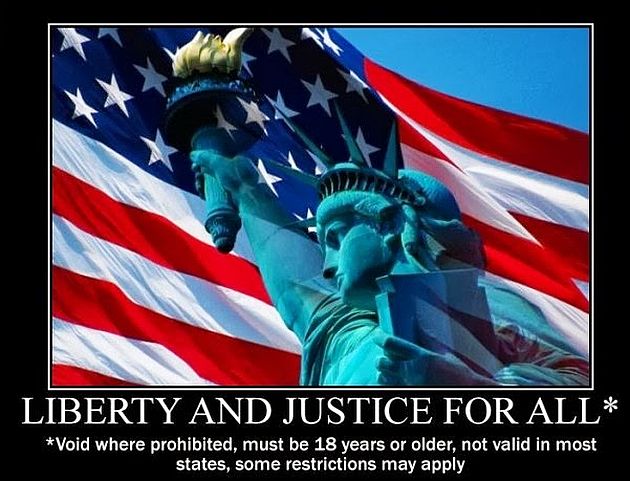 “Liberty and justice for all” is a popular phrase in the American lexicon, especially as it is the last line in the Pledge of Allegiance. But what does it mean, and is it an accurate description of the modern US? Most people have some understanding of liberty, but what about justice? Some people nowadays seem to consider justice to be nothing more than punishing people for breaking laws; in many cases, they appear to think people who break laws should be sentenced to prison automatically, regardless of what law they broke or whether that law should even exist in the first place. Is that truly justice? Let’s see.

Building on this foundation, what laws are acceptable for a civilized society? This is an important question since at the base of every law is force. Whether the force is used openly for all to see or is held as a last resort, there is no law that doesn’t depend on the use of force in order to be carried out. Generally speaking, the use of force falls under two different categories: offensive force and defensive force. Offensive force is when one person tries to initiate one or more actions against another person or their property that the other person opposes. Defensive force comes into play when those who are met with offensive force respond to the offender with a comparable amount of force in the hopes of stopping the offense. The violence inherent in uncivilized or savage societies as discussed in the previous paragraph falls under the category of offensive force, while any violence used against the offender would fall under the category of defensive force. Thus, whatever laws are in place in a civilized society must prohibit offensive force (which includes but is not limited to murder, rape, theft, and assault) while allowing defensive force.

Additionally, whatever laws exist have to be universalizable; that is, they must apply equally to everyone in society. If some people, by virtue of the laws, can initiate force against others while those on the receiving end of that force are prohibited from doing the same or defending themselves, then that society will no longer be civilized. It might not be as uncivilized as a society in which the majority of people initiate force against others, but it would still be uncivilized. Over time, the disparity between those allowed to use offensive force and those prohibited from defending themselves against said force would widen as those with power over others would invariably use it in new and creative ways, resulting in an increase in violence and an endless slide into ever-increasing savagery. Thus, offensive force cannot be universalized in a civilized society. On the other hand, since defensive force would only be applied against those who wield offensive force, it can be universalized without the breakdown of civilization. A consequence of this would be that no person or institution would have a monopoly on the use of defensive force or be allowed to get away with using offensive force. Everybody would be allowed to defend themselves and their property as well as help someone else do the same, and nobody would be forced to pay for services they don’t use or be prohibited from using one service over another. If a peaceful person were made to pay for a service they neither wanted nor used, then that would be uncivilized. Further, if they were made to pay for a service intended to protect their property and couldn’t get out of it, then the service provider would be in effect stealing from them in order to protect them against theft, an absurdity if ever there were one.

Having looked at several requirements for how any existing laws should look, let’s take a second to look at how the laws should not look. James Madison and Alexander Hamilton explained it well in the following quote: “It will be of little avail to the people, that the laws are made by men of their own choice, if the laws be so voluminous that they cannot be read, or so incoherent that they cannot be understood; if they be repealed or revised before they are promulgated, or undergo such incessant changes that no man, who knows what the law is to-day, can guess what it will be to-morrow.” Unfortunately, given that nobody knows how many federal laws there are and the complexity of bills averaging well over 1,000 pages in length, it’s clear that the warning given by Madison and Hamilton has been completely ignored.

The type of society with laws built off the above foundations would be one in which people are free to do what they like with their person and property as long as they afford others the same freedom. While there will be some violations of person and property in any society that gets large enough, most people steer clear of such actions. In the areas of their lives in which they are free to make their own decisions, most people demonstrate a preference for liberty and civilization. Outside of defending themselves and those around them, most people base their friendships, romantic relationships, employment, free time, etc. on peaceful, voluntary interactions. There are several possible reasons they might do this, including but not limited to a desire to treat others well, knowing that others likely won’t hurt them if they don’t hurt others, and not wanting to get in trouble for hurting someone else. Regardless of their reason for doing so, most people choose to live their lives in a civilized manner as often as they can. This opens up possibilities for long-term engagements, contracts, and voluntary cooperation from many people on large-scale ventures; while this doesn’t itself create civilization, it can help it grow and flourish, which ultimately benefits everyone in society.

Now that we’ve examined civilized society and the requirements for it, let’s look at what justice is and how it fits in with all of this. To borrow from the previous paragraph, the normal state of any given person is to be free to do what they like with their person and property as long as they afford others the same freedom. If someone aggresses against their person or property, they are no longer in such a state. Such an occurrence would be routine in an uncivilized society, but for a civilized society to sustain itself, the aggressor would have to restore their victim to the state they were in before the aggression occurred, which is sometimes thought of as “making the victim whole again”. That’s what justice ultimately boils down to, and that would be its purpose in such a society. A true justice system, therefore, would only have the laws which necessary to prohibit violations of person, property, and contract.

As an example of these principles in action, if Person A steals money from Person B, what would be the just course of action? Looking at the matter from the perspective of making B whole again, justice would require A to return the stolen money. If A did so willingly and without any further trouble, then the matter would end there. But suppose A ran away or refused to willingly return the money. In that case, A would have to pay the costs of bringing him in as well as any and all legal fees involved in making B whole again. This would avoid B being victimized twice by first being robbed by A and later by having to pay to get back his own property as well as place the burden of paying for the justice system onto A, since a justice system would be pointless if not for aggressors such as A.

An example of injustice in this situation would be if A were not required to return B’s money and were instead simply sentenced to prison. While a prison sentence may sometimes be an example of justice, such as in cases involving murder or rape, that isn’t always the case; sometimes it would be unjust, such as in this example. Further compounding the injustice would be if B then had to pay legal fees despite not getting his property back; even greater injustice would be if B had to pay for A to have food, shelter, healthcare, and so on while in prison. In this situation, A is not required to make B whole, and B is further aggressed against by having to support A. Any system set up such that the “winner” in a case is not made whole again and has to pay to support his aggressor cannot be considered a justice system. If the purpose of justice is to make victims whole again, then a justice system must not harm existing victims or create new ones.

This has been an attempt to outline the requirements for a civilized society and a just society. Such a society would also be free, as civilization and justice are inseparable from freedom; the absence of any one of them would be a detriment and result in a society that is not civil, just, or free but would, at least for a while, merely appear to have one or more of those characteristics. To take any society that is not civil, just, or free and change it to embody those characteristics, a major overhaul would be required. Small changes would be insufficient to make that happen. Talking about reforming the society without an understanding and pursuit of the ideas underlying those characteristics would be akin to trying to change a building’s foundation by rearranging furniture on the top floor; it would look different in some ways, but it would still be fundamentally identical to the way it was before. While the US has a lot of work to do, there’s still hope that those committed to improving it may someday make it into a nation of liberty and justice for all. 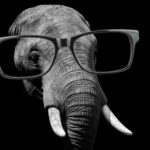 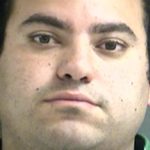