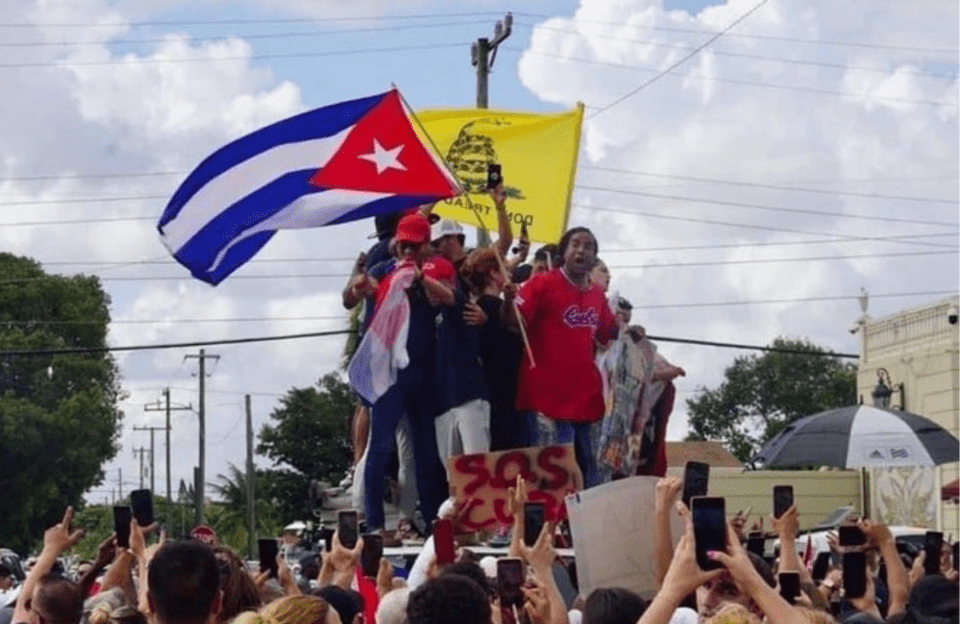 The people of Cuba have taken to the streets to protest shortages of Covid-19 and basic supplies.

That is what you will read all over the place if you pay attention to any of the mainstream media’s “coverage” of the Cuban people’s uprising that gained worldwide attention Sunday.

The Biden Administration even released a statement trying to support this story:

“We stand with the Cuban people and their clarion call for freedom and relief from the tragic grip of the pandemic and from the decades of repression and economic suffering to which they have been subjected by Cuba’s authoritarian regime. The Cuban people are bravely asserting fundamental and universal rights. Those rights, including the right of peaceful protest and the right to freely determine their own future, must be respected. The United States calls on the Cuban regime to hear their people and serve their needs at this vital moment rather than enriching themselves.”

It doesn’t take an Einstein to figure out that this movement is not about Covid-19, but rather an attempt to overthrow the island’s communist dictatorship, which has oppressed the Cuban people for over 62 years.

Don’t believe me? Fortunately, you don’t have to just take my word for it.

Let those who have eyes to see and ears to hear listen to the cries of the Cuban people as they demand an end to the dictatorship and that their liberty be respected.

Liberty. The opposite of socialism. https://t.co/XT26VmXNvN

The Cuban people are in the first stages of a new revolution—this time to throw off the chains of oppression which have for enslaved them for so long. To my fellow Americans, I ask you to look at the symbol that Cubans have chosen in their struggle to reclaim their liberty.

They are carrying the American flag as their banner in this fight, just as the people of Hong Kong did in their own struggle for independence from communist China.

our own citizens think the flag is a symbol of hatred, bigotry, and discrimination, while other countries find us to be the beacon of liberty, freedom, and anti-tyrannical authoritarianism.

a truly sad precedent, but our own spoiled brats ruin our reputation. https://t.co/55U0WhTLzQ

I find myself at war with two very different but powerful feelings inside. On the one hand, I am filled with great joy that the people of Cuba have begun to fight like men, are determined to be free, and refuse to live under the burden of slavery. On the other hand, I am heartbroken by those among my own countrymen who seek to enslave the American people in the name of equality.

I do not feel the United States should intervene in the struggle of the Cuban people for their freedom as it would only serve to make a bad problem worse. Our interventionist foreign policy has proven to be disastrous, and it is not our place to police the world. However, my liberty-loving heart is with the Cuban people, and I only wish that I were a rich man so I could send arms so they can properly overthrow the tyrants who oppress them!

The @POTUS administration as well as their MSM allies are lying to you the people of #Cuba are attempting to throw off the chains of their #Communist dictator. This is not about #COVID19.

It is the right of all individuals to be free to decide for themselves the manner in which they choose to live. That was the driving force of our American Revolution. I pray that we remember this and will be the nation that the people of Cuba and Hong Kong think we are.

May we be the people who deserve to have our flag carried as a symbol of resistance to tyranny, and not a bunch of spineless cowards who slowly allow our natural rights to be eroded by a government that is beginning to look more like the dictatorship the Cuban people are fighting and less like the Constitutional Republic intended by our founders.

The harsh reality is the Cuban people are acting more American right now than many of our own people.

Pro-democracy protestors in the Cuban town of Batabanó have seized control of the Young Communists headquarters.

These images are surreal. Courage is contagious. Make them go viral. #PatriaYVida
pic.twitter.com/c4B3jRyItf

As Glenn Beck said on his radio program, Monday, “They are not saying give me liberty with no government, with no government. No they’re not saying that. They’re saying, hey, government is out of control. How about we get rid of the dictators? That’s what they’re saying. No more Communism. Hey, the socialized healthcare system is not really working out for us. I think that’s what they’re saying and America’s voice should be very clear— To the Cuban people, we support you. We are fighting what you fought for the last few decades. We are fighting the beginnings of it here. We support you. We need your support as well. There are people raising their hands all over the world screaming for liberty and freedom.”

To the Cuban people taking a brave stand against socialism, WE SUPPORT YOU. #CubaFreedom pic.twitter.com/6qwgBBWEY3

I want to encourage the Cuban people with the words of Thomas Jefferson in America’s Declaration of Independence:

“We hold these truths to be self-evident, that all men are created equal, that they are endowed by their Creator with certain unalienable Rights, that among these are Life, Liberty and the pursuit of Happiness. That to secure these rights, Governments are instituted among Men, deriving their just powers from the consent of the governed, That whenever any Form of Government becomes destructive of these ends, it is the Right of the People to alter or to abolish it, and to institute new Government, laying its foundation on such principles and organizing its powers in such form, as to them shall seem most likely to effect their Safety and Happiness. Prudence, indeed, will dictate that Governments long established should not be changed for light and transient causes; and accordingly, all experience hath shewn, that mankind are more disposed to suffer, while evils are sufferable, than to right themselves by abolishing the forms to which they are accustomed. But when a long train of abuses and usurpations, pursuing invariably the same Object evinces a design to reduce them under absolute Despotism, it is their right, it is their duty, to throw off such Government, and to provide new Guards for their future security.”

To this end, I say to the Cuban people— Your willingness to fight for liberty inspires me to continue my own pursuit of the restoration and preservation of the natural rights of all men. I pray for the blessings and protection of our Creator, who made all men free. Please do not give up, even when the fight gets hard. The struggle for liberty is worth every bit of the effort to obtain it.

The Cuban people have my support and my prayers in their struggle for liberty. When they win maybe I’ll finally get to try my first Cuban cigar and it won’t cost an arm and a leg.

Tonight as i smoke a late night/early morning post-article cigar. Tonight as I smoke this cigar my thoughts and prayers are with the people of #Cuba as they struggle for liberty. This liberty-loving American stands with you in heart as you struggle to throw off the chains of 1/3 pic.twitter.com/LHf83jpSmj

2/3 tyranny and #Communism which have oppressed your people for over six decades. Don’t believe the mainstream media lies this is about overthrowing authoritarianism not about #COVID19. My next article coming out proves that. God bless the Cuban people for fighting for the

3/3 liberty that so many people in #America take for granted. Godspeed! #FreeCuba