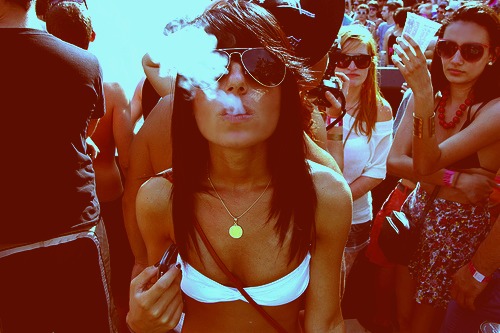 Cannabis is in the air – or in the news a lot lately, as states continue to legalize, decriminalize and medicinalize the plant.

Last week, Senators Cory Booker, Rand Paul, and Kirsten Gillbrand introduced the first-ever bill in the US Senate to legalize cannabis for medical use. This is a historic moment, and speaks to the broad appeal of cannabis as an issue – two Democrats and a Republican, with massive support from the public have brought this forward.

Just this past Monday, an interview with VICE explored President Obama’s opinions on the subject. Though Obama is known for smoking plenty of weed in his past, he does not like this being a big issue among young voters:

Backlash was felt all around, most surprisingly on some mainstream talk shows like The View, which saw Obama being contradicted on his views by the hosts. Cannabis is incredibly popular right now, something libertarians are understandably excited about.

Obama’s comments reminded me of a dinner I attended in May 2014. I ended up sitting next to Ann Coulter as she mocked libertarian ideas while launching backhanded compliments at me regarding my appearance and alleged novelty within the movement.

After asking what I did for a living (I worked for Peter Schiff at the time) she interrupted me to tell me that while “this goldbug thing” was interesting, she met those “Students for Liberty kids” and “the problem with you libertarians is that you’re all obsessed with pot.”

Begging to differ — what’s awesome about libertarians is that we’ve been on the right side of cannabis since the beginning, and the rest of you are finally starting to come on board.

So while people like Barack Obama and Ann Coulter want to dissuade the rest of the country from caring about cannabis, we’re here to tell you exactly why you should be just as obsessed with pot as we allegedly are.

You own your own body.

As such, you should be able to decide what you do or do not put into it. You can smoke cigarettes and drink alcohol, yet somehow a safer, more natural substance is simply not allowed.

Cannabis Should Not Be a Schedule I.

In 1970, Cannabis was classified as Schedule I.

Schedule I is the only category of controlled substances that may not be prescribed by a physician. Under 21 U.S.C. § 812b, drugs must meet three criteria in order to be placed in Schedule I:

Despite the fact that numerous studies have shown that:

Legal Cannabis Can Help Us Be Tough On Crime

Let’s be clear: the United States has the highest incarceration rate in the world.

Imagine the money we could save. Imagine the manpower we could use to solve real crime, like murder or rape. Cannabis legalization will reduce debt, prison populations, repeat offenders and it cripples drug cartels in Mexico. What’s not to love?

The simple fact of the matter is, we need to focus on actual crime where people are victimized, and all this wasted time and resources on cannabis is destructive to that goal.

Cannabis Legalization Will Allow People to Get Medication They Need.

Now, I’m not your hippie neighbor telling you that cannabis will cure every ailment you’ve ever had, but there is a scientific reason that cannabis is considered medicinal, and it’s actually a lot more substantiated than your daily St. John’s Wort.

Dear Democrats — where have you been on this? Republican Rand Paul was the first elected official on the national stage to seriously and credibly talk about the fact that enforcement of cannabis prohibition is completely and utterly racist.

Where are you, liberals?

We’ve barely scratched the surface of this issue, but in the meantime…

Sorry Obama, these and many other facts are why cannabis legalization should be a priority of young people, and of everyone else. It will make clear, obvious, measurable and positive change in all of our lives quickly. Had you spent your presidency fighting for cannabis legalization, you could’ve been the president of change you claimed you would be.

The fact is, cannabis is in the air, and us libertarians are here to hand you a joint and tell you it’s about time you became as obsessed with pot as we are.

Mom Goes To Police For Help With Son She Caught Stealing, Big Mistake.