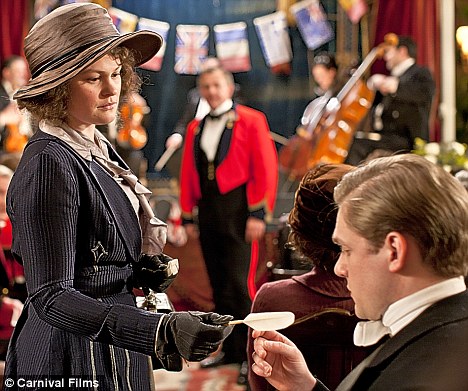 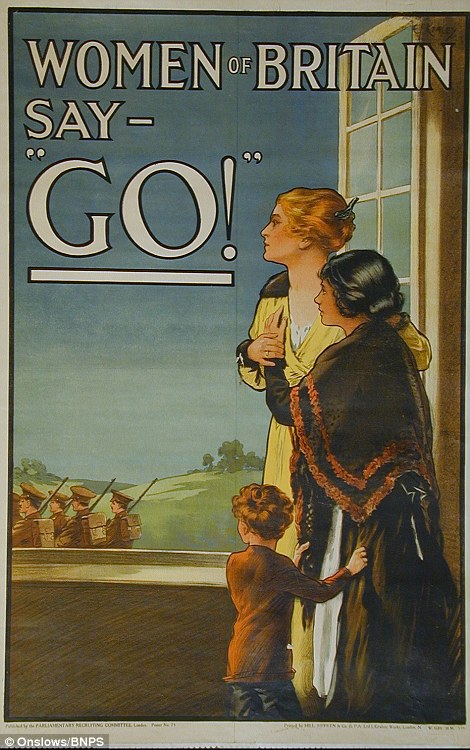 A collection of British war propaganda posters is going up for sale, and in doing research for this piece about them, I uncovered an unsettling story about how during the Great War feminists and suffragettes sent men off to die by shaming them into enlistment. How did they shame them? With a simple white feather.

An archive of nearly every First World War recruitment poster ever has emerged for sale after it was discovered hidden in an attic. The collection includes almost 200 posters that were created between 1914 and 1916 to encourage British men to go and die in the Great War.

The Daily Mail writes: “The posters have an increasingly menacing tone in the months before compulsory conscription was introduced in 1916 after Britain had suffered so many losses on the Western Front.”

The collection is the property of Arthur Maxted, who inherited them from his grandfather who worked for a printing company during the war. The collection is being sold at auction for around $33,000.

The posters not only depict a desperate nation’s malice in preparing to conscript their young men into one of the most useless wars in human history, but the willingness of feminist activists at the time to take part in shaming men in order to get them to submit to slaughter for their own empowerment.

In 1914, British feminists and suffragettes conspired together in the Order of the White Feather to shame men into going off to be killed.

The White Feather traditionally has been a symbol of cowardice in the U.K. since the 18th century. In 1914 Admiral Charles Fitzgerald founded the Order with Mrs. Humphrey Ward in order to shame men by persuading women to give them a white feather if they were seen without a uniform. They also lobbied for the draft, demanding men be conscripted even if they lacked votes due to being too young or not owning property. 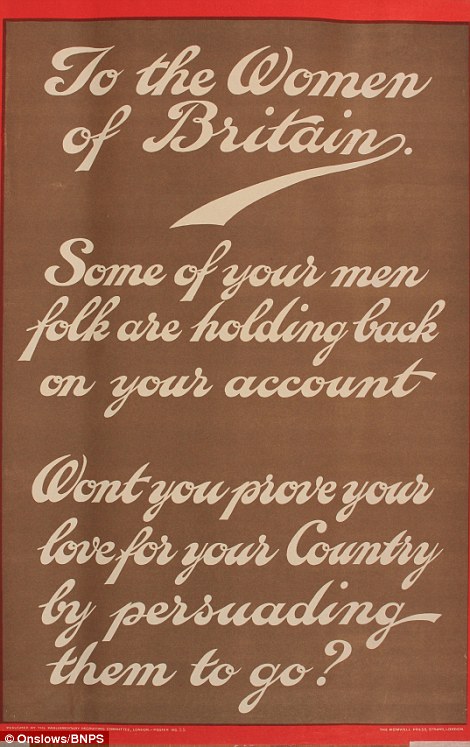 The group was so effective that the Home Secretary Office began to issue lapel badges to public service employees reading “King and Country” in order to prevent them from being shamed in public and indicate they served the war effort.

The Silver War Badge was distributed to service personnel who had been honorably discharged to prevent war veterans out of uniform from being shamed by women. The campaign was very unpopular with men at the time due to fathers who stayed home with their children being constantly mistakenly shamed by the Order.

One day a Private named Ernest Atkins was on leave and when he was given a feather by a girl sitting behind him on a tram. He smacked her across the face with his book saying: “I’m in civvies because people think my uniform might be lousy, but if I had it on I wouldn’t be half as lousy as you.”

Another serving soldier named Compton McKenzie wrote that  “idiotic young women were using white feathers to get rid of boyfriends of whom they were tired.” And one young man, a pacifist named Fenner Brockway reportedly received so many white feathers that he could make a fan.

After the war, feminist author Virginia Woolf whitewashed the group, claiming that there were only 50 or 60 white feathers handed out, but this was a lie.

One woman from the similarly themed Active Service League named Ethel M. wrote a letter to a man which read “If you are not in khaki by the 20th I shall cut you dead.” The League of 20,000 women voiced contempt for any man who was not in the active service. Many of them were suffraggettes, but still many were likely acting out of the sense of empowerment they received from participating in the war effort in such a way. Their girl power they received from campaigning for voting rights they realized could now be used as a weapon against men.

The first season of the popular show Downton Abbey prominently featured the movement of the White Feather. Two characters, William Mason and Moseley are presented with feathers, as women express their disgust at them for not serving, even though they were exempt.

One young soldier named Fred Broome was sent home after the military learned from his father that he was only 15. While walking home one day he was accosted by four girls with feathers who laughed at his explanation for why he was home instead of fighting. “I felt humiliated” he said. But he still went back to the recruitment office and rejoined, lying again about his age to join up due to the shame. As the Daily Mail described them: “Then, as now, they often hunted in packs and can have given little thought to the deadly consequences.”

A wounded soldier recalled being on a bus and receiving a white feather from a woman who gave it to him saying: “because you’re a coward.” He then reportedly showed her his damaged leg and asked her to go looking for the missing part, “lying on the battlefield somewhere.”

One young woman remembers her father, Robert Smith, being given a feather on his way home from work: “That night he came home and cried his heart out. My father was no coward, but had been reluctant to leave his family. He was thirty-four and my mother, who had two young children, had been suffering from a serious illness. Soon after this incident my father joined the army.”

Girls with white feathers thought they were being patriotic, but they had no idea what their actions were leading to. They were blissfully unaware of the hypocrisy of claiming men were cowards for staying at home, while they did the same. They were allowed to live, while they took pleasure in humiliating men before sending them off to die.

The right to bear arms is flourishing in America