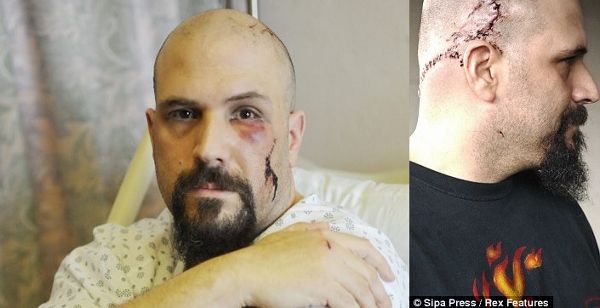 Joseph Lozito was riding the subway when he was approached by drug-fueled spree killer Maksim Gelman. The murder announced that “you’re going to die,” and stabbed Lozito in the face, plunging a knife beneath his left eye.

Lozito did not die. The 6-foot-2 dad wrestled Gelman to the ground as the killer continued to hack away at him. Gelman stabbed Lozito in the back of the head several times before Lozito managed to disarm him. “He got to the back of my head because my left shoulder [was] in his waist,” said Lozito. The hero says he held Gelman in place until police arrived and arrested him.

Yet Lozito, who is suing the city, says that he never should have been attacked in the first place. He alleges that police officers Terrance Howell and Tamara Taylor, who were also on the subway, lazily ignored the fact that Gelman was loudly blundering about the train, even dismissing passengers who tried to alert them to Gelman’s presence.

The city is refusing to settle the suit, arguing that police had no duty to protect the people on the train. But “that doesn’t detract from the Police Department’s public safety mission,” the city says, “or the fact that New York is the safest big city in America.” It’s curious that New York City would tout its safety record while asserting that its police officers have no responsibility to protect people from knife-wielding madmen.

Officer Terrance Howell says that he, not Lozito, subdued Gelman. Lozito says that he held Gelman down until Howell tapped him on the shoulder, saying “You can get up now.”

The many scars on the back of Lozito’s head are a problem for Howell’s narrative. Lozito also says that at least one grand jury member has corroborated his version of events.

When Feminists Sent Men Off To Die