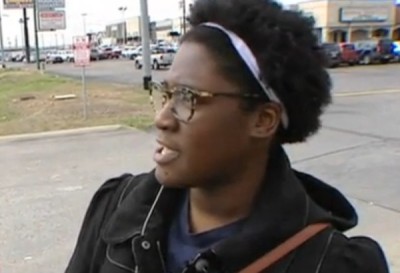 “SAPD…the LAPD of the Central Texas”


SAN ANTONIO,TX–When I came across this story featuring a student from my Alma mater, I wasn’t entirely surprised at its contents. San Antonio police are notorious for their excessive use of force, with some officers even raping young women while they’re on duty. Yet I felt compelled to reach out to Abie Kyle Ikhinmwin, a law student from the University of Texas at San Antonio, and ask her for more details about a senseless arrest that left her feeling “dehumanized.”

How did the whole incident start?

I was initially recording officers setting up a speed trap on my phone. I was shocked that there was so much man power being wasted on issuing speeding tickets. And the officer had no idea I was recording. When he walked up to me, he motioned for me to take my headphones off. He assumed I was listening to music. They had no idea I was filming them.

What were you doing at the bus stop that caught the officer’s attention?

I believe I got the officer’s attention because I am black and live in a nice part of town. Friday afternoon around 4:30 I decided to go to the grocery store and rode my bike to the bus stop. While I was waiting there I was harassed several times by an officer. First, the officer told me to move myself and bicycle out of the street over his loud speaker from his car. I complied. The second time he approached me in the street and I didn’t recognize him. He stated that he previously asked me to move, and that he was for a second time asking me to move my bike into dirt. I told him that I keep my bicycle tires clean and that I wouldn’t move my bike into the dirt. From there he began getting more and more hostile.

He asked me if he could see my ID. I told him he could not, and that I was not breaking a law. He then grabbed my wrist tightly and said, “You aren’t going anywhere.” When I asked him to let go of my wrist he refused and he grabbed my arm. I again told him to let go of me. He started dragging me and hitting me, and it physically escalated into him punching me several times in my back, and sides. He started throwing me around, slamming me into his car, pulling me by my hair throwing my head into the seats. I was never charged with anything, I was never read my rights. I was told I was under arrest and handcuffed.

Why did you choose not to provide ID?

I chose to not provide ID for two reasons… First, I know my rights and knew that I wasn’t breaking any laws and therefore didn’t have to provide any ID. Second, I had the flu, I was on my way to the grocery store after being home sick for days. Just as most people who are running errands are in a rush and don’t like to be interrupted, I don’t like to be harassed on my way to the grocery store, school, work, etc. We don’t live in Nazi Germany and the SAPD is not the Gestapo. So, I chose to exercise my right to say NO.


What did they ultimately charge you with?

They ultimately charged me with failure to identify myself, or walking without an ID, which in itself is a ridiculous charge to hand out to a pedestrian.

I want to point out that the whole reason the officer was harassing me was my bike. However, the infraction I was cited on had nothing to do with my bike. How is that not an admission of fault? Saying you are under arrest for one thing and citing me for identification? It’s almost painful to watch. He couldn’t think of anything to charge me with and he obviously abused his power, but instead of being a man and saying he made a mistake, he conferred with his colleagues and came up with failure to identify myself. I missed the memo that says ‘walk with identification or get beat up and go to jail.’

Did the officers use excessive force while arresting you?

They threw me in the back seat of the squad car where several other police officers joined in degrading me and threatening me. They threw around my Cannondale bicycle, closing the door of their car on it several times. On the ride downtown the officer who assaulted me said, “You know, if you press charges… they will keep your bike as evidence and you won’t get back for at least 6 months.” When I got to jail I was not charged with anything and no one could tell me why I was being held, yet I was thrown in a cell for 4 hours. I asked when I got there to see a doctor for my injuries and they wouldn’t let me. From the time I was there until the time I left, the doctor sat outside of the cell adjacent to me with no patients except maybe two that were in and out and I was not permitted to see him. Also, the officers asked me where I was from and about the origin of my name. I told them I am Nigerian and the officers began calling me the Nigerian Nightmare. I have never been so disrespected in my life. I was beaten and didn’t get to go to hospital until hours after. I have documented all of my injuries and was seen at Methodist Stone Oak for my injuries. I still have bruises and it is over a week later.

Has your opinion on law enforcement changed after this incident?

My opinion has not changed. I have always known that our legal system has flaws… mainly because there are very little education requirements. It is ironic that this officer stated that he was doing all of this for my safety… yet he beat me up. I never wanted this. I never wanted this to be my story. I am a first generation American, and my friends and family are all appalled. The worst part about all of this is this is the middle of a very busy semester. My last semester at that. I work hard. I go to school. I go to work. I study. That’s it. I respect people around me and expect the same. This entire incident has really shaken my faith in mankind and I’m trying to turn it around so that no other person is subjected to these type of atrocities

Feliciano Rendon threatened me by saying if I pressed charges against him they would keep my bike as evidence for at least 6 months. Where is the humanity in that? Be a man, apologize. You beat up a 25-year-old girl for nothing.. because he feels so inept in his own life that he has to abuse his power. I told the officers I have worked with great cops that do great work... especially at the DA's office when I interned in the Family Violence Division. This is not what policing is about. This is not what good policing is. I'm sitting in jail for doing nothing and he is patting himself on the back... high-fiving his buddies. He needs to held accountable. I want the entire SAPD to know that I am not afraid. I am educated, and I know I did nothing wrong.

There was also a female officer that appeared after I got beat up. I told her that guy just beat me up and her response was I probably deserved it. I told her I was a legal intern at the Family Violence Prevention services, and I could tell them every procedural error they had just committed aside from actually beating me and unlawfully detaining me. Her response was, "Oh yeah? You're going to tell your court buddies? I bet they will think it's so cool that you are sitting in the back of a squad car."

I told her, "I am not ashamed of where I am sitting, because I have done nothing wrong. The shame belongs to you. Go ahead and enjoy your day, because when I get out of this, you will remember my name and remember how this day ended your policing career."

I am the victim here, not the criminal. Badges and uniforms don't give us free reign over others.

The SAPD could not be reached for comment. Abie is currently looking for a pro bono attorney to help her with her case. If you'd like to help her out, email her at [email protected]