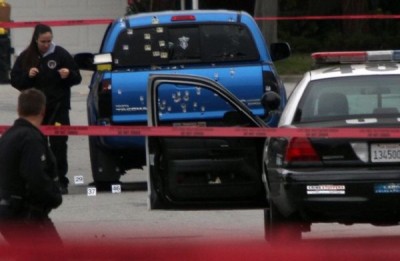 LOS ANGELES, CA– Some may remember the harrowing case of cop-killer Christopher Dorner. Last year the former cop went on a rampage in California, sending people into a heightened state of vigilance. Yet the actions taken by eight LAPD officers stray from vigilance into excessive use of deadly force.

While guarding a high-ranking officer they feared was on Dorner’s hit list, the officers happened upon two women who were delivering newspapers in a blue Toyota Tacoma pickup truck. The officers apparently mistook the truck for Dorner’s, even though he drove a charcoal Nissan Titan pickup truck.

With no warning, the eight officers unleashed a hail of bullets, firing 103 times at the truck carrying Margie Carranza and her 71-year-old mother Emma Hernandez. Carranza, then 47, was cut by flying glass, her mother was shot in the back. Miraculously, both women survived.

None of officers will be fired, or even suspended for failing to identify themselves as police or to ensure the car was indeed Dorner’s before opening fire. They will only be required to take a little more training.

The Commission, after its investigation earlier this month, stated the officers were not at serious fault, even though they violated the Los Angeles Police Department’s policy.

Chief Charlie Beck insisted that this shooting was simply the result of “a tragic cascade of circumstances that led to an inaccurate conclusion by the officers.”

This conclusion is absurd. Police should be held accountable for firing on two innocent and unarmed women, and their incompetence should be outed rather than dismissed as a “tragic cascade of circumstances.”

Citing the tense atmosphere Dorner’s tirade had created as just cause for the shooting withers under scrutiny. Police are supposed to be able to deal with these increased pressures through the course of their training, but as is increasingly the case, officers often shoot first and ask questions later regardless of the circumstances.

The mother and daughter, though traumatized, received a settlement from the LAPD for $4.2 million dollars.

A Libertarian Defense of John Brown