“He did not recognize unjust human laws, but resisted them as he was bid.”

Many Americans are familiar with Julia Ward Howe’s patriotic anthem “The Battle Hymn of the Republic” – also known as “Mine Eyes Have Seen the Glory.”

Relatively few, however, know that Howe’s righteous chorale was an adaptation of a preexisting song: “John Brown’s Body.”

“John Brown was a hero / undauted, true and brave,” the original lyrics boasted. “Kansas knew his valor / When he fought her rights to save.”

As a Kansan of a libertarian temperament, I’ve respected John Brown since I first learned about the militant abolitionist in school. A devout Christian, Brown understood and lived by the call to action of Matthew 25:45. He resisted federal efforts to enforce slavery, fought to protect Kansan sovereignty, and ultimately gave his life for the cause of abolition. 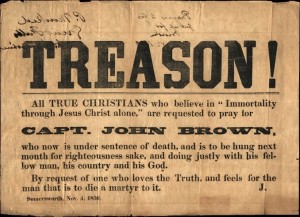 The Libertarian Republic, for these reasons, sometimes makes use of John Brown’s image. When we do, I’m reminded that not everyone shares the perception of John Brown that I developed as a student. A small but outspoken segment of our readership typically reacts by indignantly condemning Brown as a terrorist who butchered innocent people and/or heralded tyrannical policies.

A few of these people, unfortunately, seem to have gotten so carried away in their criticism of Abraham Lincoln that they’ve found themselves defending border ruffians. This is ironic: far from defending states’ rights or any other kind of rights, the pro-slavery side of the Bleeding Kansas conflict was fighting to impose slavery on the anti-slavery Sunflower State.

I’m persuaded, however, that many John Brown detractors are simply uninformed about the facts and the circumstances of John Brown’s actions.

I’d like to offer, then, the following points in support of my more sympathetic view of Brown. 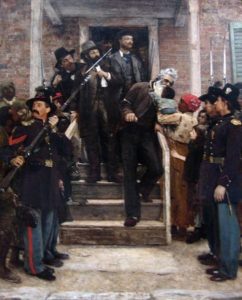 The Pottawatomie Massacre – easily the most controversial of Brown’s actions – is frequently misrepresented. It is true that John Brown and his men conducted a series of executions in Franklin County in 1856. It is a lazy misrepresentation, however, to assert – as many do – that Brown went about haphazardly cutting down entire families.

As Brown and his men carried out the Pottawatomie killings – a response to violent attacks by pro-slavery forces – they specifically targeted professional slave hunters and militant pro-slavery fighters. As the abolitionists moved from house to house, they spared not only all the women and children they encountered, but several men who they determined were not involved in the Bleeding Kansas conflict.

At the cabin of James Harris, for example, the Free State men found six residents, including four men. After questioning the men, the abolitionists executed only one – William Sherman – and allowed the rest to go free: hardly the work of terrorists wantonly butchering anyone in their path. 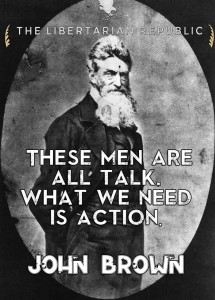 Libertarians ought to appreciate the political context of John Brown’s actions. The League of Gileadites, the first incarnation of Brown’s anti-slavery militia, was formed in direct response to the passage of the Fugitive Slave Act. By protecting escaped slaves from federally-sanctioned capture and extradition, the League effectively nullified this federal law. Fittingly, Brown’s final action was the seizure of a federal arsenal at Harper’s Ferry. From the beginning to the end of his career, Brown fought against slavery by resisting its imposition through overarching power.

John Brown’s life, then, is a stark repudiation of political centralization. In the United States, the defeat of slavery is a favorite talking point of those who extoll the goodness of unitary control. Yet John Brown reminds us that slavery was projected and prolonged because free states were not allowed to manage their own internal affairs. Long before the official end of slavery, John Brown fought and died resisting a federal government that actively enforced it.

Frederick Douglass, moreover, credited Brown with playing an indispensable role in slavery’s eventual end. John Brown not only shows us that centralized power was used for evil where we credit it with good – he demands ultimate credit for the good that was finally done. 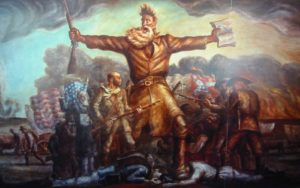 Douglass was not the only respectable figure to offer words of praise for Brown. While not condoning all of Brown’s actions, eloquent Quaker lyricist John Greenleaf Whittier lionized Brown in romantic verse, calling his death a “Christian’s sacrifice.” Whittier was an early and prominent advocate of nullifying fugitive slave laws.

Libertarians, in particular, may appreciate that the political philosopher Lysander Spooner conspired to promote John Brown’s activities. Similarly, Henry David Thoreau offered a bold and unapologetic “Plea for Captain John Brown,” comparing the federal government to Pontius Pilate and proclaiming that Brown “did not recognize unjust human laws, but resisted them as he was bid.”

Like these thinkers, readers of The Libertarian Republic should take another look at the compelling legacy of this easily misunderstood figure. The roster of people who have seen good in Brown is an illustrious one. You may decide to count yourself among them.

As a Kansan, I’m convinced that John Brown has made a lasting contribution to the defiant spirit of my state. Last April, Kansas’ legislature successfully passed a bill nullifying federal gun laws in the Sunflower State. I don’t think it’s a coincidence that they did so in a capitol building adorned with a furious mural of John Brown.