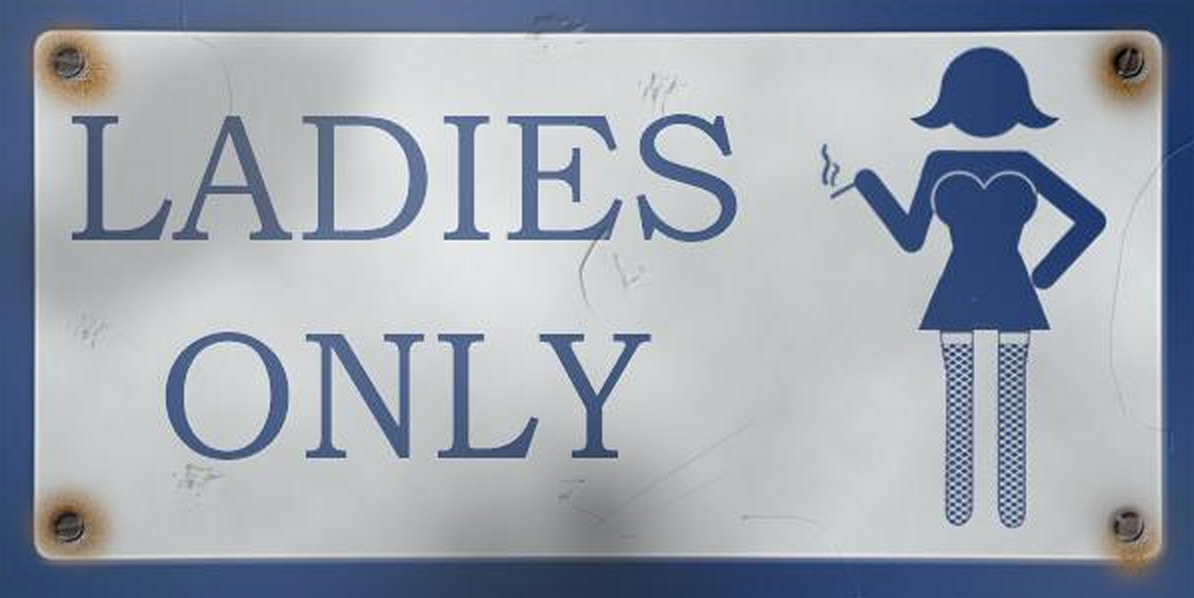 As the saying goes: “Women. You can’t live with ’em. You can’t live without ’em.” And now in some restaurants you can’t dine with ’em either. Epicurious reports that women-only restaurants are popping up worldwide from Las Vegas to London. There’s even one in Zhengzhou, China. What’s interesting about these places is that there doesn’t seem to be a whole lot of hullabaloo about this. Not that I think there should be, but it made me wonder if this trend were men-only, would the lack in response be the same? After I did some digging, it seems like the conclusion would be, “No.”

I came across a gem of an example in regards to the protest against men’s-only grills that were prevalent in the U.S. throughout the early 20th Century: “In May 1970 a prominent NYC editor, a woman, walked into Schrafft’s on the corner of 47th Street and Third Avenue with another woman. They noticed that at the back of the restaurant there was a section that looked especially attractive, with more space between tables, tablecloths, and carpeting that cushioned noise. The hostess told them it was the men’s grill and they were not permitted to eat there. They left. The editor sent a letter to Schrafft’s saying that although she was no ‘stirred-up advocate of Women’s Lib,’ she was offended by the restaurant’s policy which, she asserted, was illegal. She received a reply from a Schrafft’s VP who said that the restaurant no longer had a policy of reserving some areas for men. The hostess’s reaction, he said, was due to a breakdown of communication.” (h/t “Men Only: Restauranting Through History“)

What’s funny — but not surprising — is that the woman claimed the men’s grill was “illegal.” I’m not a lawyer, but for what it’s worth I looked into the exact language of the 1964 Civil Rights Act on the National Archives site and it said the following: “In the final legislation, Section 703 (a) made it unlawful for an employer to ‘fail or refuse to hire or to discharge any individual, or otherwise to discriminate against any individual with respect to his compensation, terms, conditions or privileges or employment, because of such individual’s race, color, religion, sex, or national origin.'”

Since diners aren’t looking for employment at restaurants, they’re just looking for a bite to eat or a stiff drink, I fail to see how the New York editor in the 1970s thought the men’s-only restaurant was illegal. But, like I said, I’m not a lawyer. This vintage example piqued my interest in other examples of haterade for gender-specific dining.

In 2004, the Louisiana supreme court outlawed the practice of men-only dining. What’s funny about this case is that the men claimed women would be violating their privacy if they were permitted to dine with them since the men were said to have sometimes dined in the nude. To that, the judge responded, “In the 21st century, it is simply archaic to cite protection of women from the sights and sounds of a locker-room environment as an excuse for excluding them from the public dining area as it exists in this country club.”

Yes, indeed, claiming to dine nude as a reason why women shouldn’t be permitted in your men’s-only restaurant is beyond silly if you can’t prove you’re actually dining nude, but on a more serious note — don’t men have the right to have places that cater just to them?

Or is there a double standard?

Other examples of specific groups being prohibited from dining at restaurants include a Monroeville, Pennsylvania restaurant that banned kids 6 years of age and under. Some in the media wondered if that was “fair.”

And a pizza restaurant in Atlanta banned screaming kids to which some objected because people seem to think they have the right to take their children to any restaurant they want. (Had to roll my eyes on that one, for sure.)

It seems the answer is “yes” when it comes but only when it comes to women-only dining. For men or for places trying to keep loud-mouthed kids from ruining a good pepperoni slice, I guess you can fuhgeddaboudit?

Just some food for thought…