“Did you come here to cheer or to protest?”

This simple question turned a quiet boarding process of a flight to Baltimore, Maryland, into a contentious and absurd tirade against Trump supporter Scott Koteskey.

Koteskey, when presented with the question from his female co-passenger, responded, “I came here to celebrate democracy, ma’am.”

The female co-passenger, was not too happy with this response from Koteskey. Her emotion quickly changed and she began angrily berating Koteskey, saying he “put a crazed man in charge of the nuclear codes! You should be ashamed!”

Koteskey replied, stating, “we’re all entitled to our opinions here, ma’am.” He explained that the lady then decided that she was then “entitled to get drunk and puke in [his] lap! I’m going to throw up right in your lap! You make me sick! Don’t talk to me! Don’t look at me!”

The lady then proceeded to call Koteskey a “bigot” and told him to get off the plane.

“Is there going to be a problem?” one flight attendant asked the woman.

She replied, “I would like for him to change seats with someone else.”

The flight attendant wasn’t having it, though, telling the woman “you don’t have that right” as she shook her head.

“You pretend you have the moral high ground, but you put that man’s finger on the nuclear button. That man doesn’t believe in climate change,” yelled the upset woman, who made sure to use air quotes to mock Koteskey. 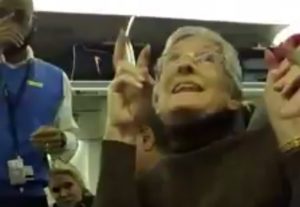 “Do you believe in gravity?” she added. “Did you know gravity’s just a theory?”

At this point, flight staff decided to remove her from the plane.

“No,” the woman replied. “I paid for this seat, and I’m sitting in it.” She added that Koteskey “is in my space,” that her mother-in-law had died and the supervisor should “have some respect” and that “there is no way I’m getting off this plane.”

The lady continued to fight, but the authorities were already on their way to remove her. Watch the many angles of the incident below.

According to the Blaze, Koteskey mentioned that the woman had reportedly harassed others, who were wearing “Trump apparel,” on the flight as well.

As the lady was removed I saw that I was surrounded by blacks, Latinos, Asians, and whites, all who had chimed in asking her to be removed and who had defended me. I was touched and moved knowing later that not all these people were Trump supporters. The black man who took the seat next to me was a registered Democrat and he and I had a very good discussion about the beauty of free speech and coming together when people insult and commit acts of violence just for having differing views.

Koteskey concluded: “It truly was a great demonstration of AMERICA and its people coming together and standing up for one another.”

Where Were Most Of The DNC Chair Hopefuls Saturday? Not The Women’s March

Milo Protester Shoots Suspected Conservative, No Charges After He Points To ‘Racism’