Polls are deployed only when they may prove useful- that is, to help the powers that be in their quest to maintain their position and influence. Indeed the polling industry is a powerful ally of depoliticization and its counterpart, which is consensus. The polls undoubtedly help decide what people think, but their most important long term influence may be on how people think. (Hitchens, Harpers, April 1992)

“To be able to cite a poll is now the shortest cut to economizing both on thought and research.” (Hitchens, Slate 11.01.10) 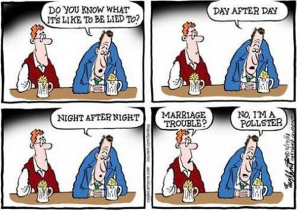 When Christopher Hitchens cited these words his undoubtedly Marxist tendencies would probably have been thinking that wealthy patrician capitalist Imperialists were the ones manipulating the public at large using public opinion polling… and he would have been right. But only partially right. Indeed the new brand of American style corporatism birthed by the New Deal has bred a nasty bit of government subsidized, bailout entrenched super corporations that act as a law unto themselves in many ways. But the social democrats of America do plenty of public broadcasting of their own points of view, and at least American citizens aren’t being taxed to fund Fox News. That’s a crucial difference when comparing organizations such as PBS, NPR with Fox.

In regards to polling, it is common practice in politics to only report on polls that favor your specific candidates or issues and to downplay those that do not agree with you. Thus you are a consensus builder. Modern opinion molders express themselves through polling, and usually it’s when they don’t feel like thinking that day. They’d rather let you do it for them. Then they can feed the results back to you in a way that you find appealing. You don’t know there are other options if you are never shown any others. Also, most people lie on opinion polls. The more personal the information that is being requested, the less likely the participants are to be honest.

To unlock the mystery of polls, one simply has to ask the question “Why do you care what other people think about a particular subject?” For instance, if most people liked grape, but you liked strawberry better; you certainly wouldn’t care what any tyrannical majority thought about the subject. But for some reason, in public polling and elections it’s different. You can be swayed. You know you like Candidate A, but the polls are showing they aren’t going to win. So what do you do? It depends. Are you actively engaged in trying to get others to vote for your candidate of choice? Or are you a passive observer, just trying to “pick a winner”? If you are the latter then your exercise ends rather quickly. It is in your nature to allow others to do thinking for you, and they will gladly take that position away from you. You are of no concern to people in power other than to pull the lever a certain way, pay your taxes and shut up. But for the former group, those who are actively seeking power, reform or to gauge hearts and minds… polling is a powerful tool.

To pollsters, it is very important to them how you think. If I am a pollster, and I am commissioned to get a certain result, won’t I get it every time? The idea is to mold opinion by showing information to the public and then asking series of questions that will inevitably lead them all to the same answer, or at least a majority opinion. That is how consensus is built. It is not based on the free exchange of ideas. It is based on funneling the public consciousness into prearranged thought patterns in order to enforce conformity. That is how the American people have become so subdued by their media. Even our public broadcasting channels broadcast Social Democratic propaganda, and those who question it are laughed at. As if the socialist/communist cabals aren’t just as active as the military industrial complex in propagandizing the American people.

Fox News Pollster Frank Luntz once stated about polling that “It is a science… but there is a little bit of art to it.”

What do you think? Do you care much about public opinion polls? How do you react when someone tells you that “70% of people want X. That makes it good.”?

Will Hurricane Sandy Stimulate the Economy?

What do you do when the government steals your property?