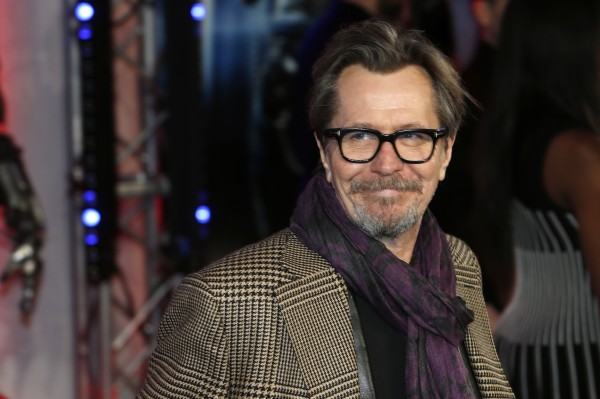 Gary Oldman is known as many things. Commissioner Gordon, Sirius Black, and even a white Rastafarian drug dealer in Tarantino’s True Romance. Now, those who have grown tired of the double standards in Hollywood have found an ally in the acclaimed actor and self-proclaimed libertarian. In the new July-August issue of Playboy, Oldman doesn’t hold back his vitriol over Hollywood’s “nonsense behavior.”

“I just think political correctness is crap. That’s what I think about it. I think it’s like, take a f—ing joke. Get over it…No one can take a joke anymore.”

Oldman then went on to defend Mel Gibson when the conversation turned to financing films. “He got drunk and said a few things, but we’ve all said those things. We’re all fucking hypocrites. That’s what I think about it…It’s the hypocrisy of it that drives me crazy.”

“Alec [Baldwin] calling someone an F-A-G in the street while he’s pissed off coming out of his building because they won’t leave him alone. I don’t blame him. So they persecute. Mel Gibson is in a town that’s run by Jews and he said the wrong thing because he’s actually bitten the hand that I guess has fed him—and doesn’t need to feed him anymore because he’s got enough dough. He’s like an outcast, a leper, you know? But some Jewish guy in his office somewhere hasn’t turned and said, “That fucking kraut” or “Fuck those Germans,” whatever it is? We all hide and try to be so politically correct. That’s what gets me. It’s just the sheer hypocrisy of everyone, that we all stand on this thing going, ‘Isn’t that shocking?'”

Oldman’s comments resonated with a lot of readers, especially when he turned to calling out how people hide behind satire to say things others aren’t allowed to.

“[I]f I called Nancy Pelosi a c-nt—and I’ll go one better, a fucking useless c-nt—I can’t really say that. But Bill Maher and Jon Stewart can, and nobody’s going to stop them from working because of it. Bill Maher could call someone a fag and get away with it. He said to Seth MacFarlane this year, ‘I thought you were going to do the Oscars again. Instead they got a lesbian.’ He can say something like that. Is that more or less offensive than Alec Baldwin saying to someone in the street, ‘You fag’? I don’t get it.”

Predictably, Oldman isn’t without his critics. He even states to Playboy that he has been “overly forthcoming” in past interviews. After his defense of Gibson and Baldwin, he jokes, “So this interview has gone very badly. You have to edit and cut half of what I’ve said, because it’s going to make me sound like a bigot.”

Oldman’s predictions have come to fruition, and then some. His statements to Playboy were pounced upon immediately by the Anti-Defamation League, an anti-Semitism watchdog group. Their director, Abraham H. Foxman, stated that Oldman “should know better than to repeat tired antisemitic tropes about Jewish control of Hollywood…Mel Gibson’s ostracisation in Hollywood was not a matter of being ‘politically incorrect’, as Mr Oldman suggests, but of paying the consequences for outing himself as a bigot and a hater. It is disturbing that Mr. Oldman appears to have bought into Mr. Gibson’s warped and prejudiced world view.”

Oldman is now kowtowing to appease whatever Jews he may have offended. After seeing the mess PC groups have made of other actor’s careers, I suppose you can’t blame him. But as a Jew myself, I saw nothing wrong with Oldman’s defense of Gibson. Both actors have the right to say whatever they like without fear of retribution. Still, Oldman issued an apology, saying:

“I am deeply remorseful that comments I recently made in the Playboy interview were offensive to many Jewish people. Upon reading my comments in print I see how insensitive they may be, and how they may indeed contribute to the furtherance of a false stereotype. Anything that contributes to this stereotype is unacceptable, including my own words on the matter.”

The Anti-Defamation League has rejected Oldman’s apology, whining that, “we are not satisfied with what we received. His apology is insufficient and not satisfactory.”

In liberal Hollywood, “political correctness” always seems to win. What’s most disappointing of all is that in the midst of the uproar over Oldman’s alleged “bigotry”, his message of allowing people to express themselves freely has been lost. As Oldman said in his interview, “It’s dishonesty that frustrates me most. I can’t bear double standards. It gets under my skin more than anything.”