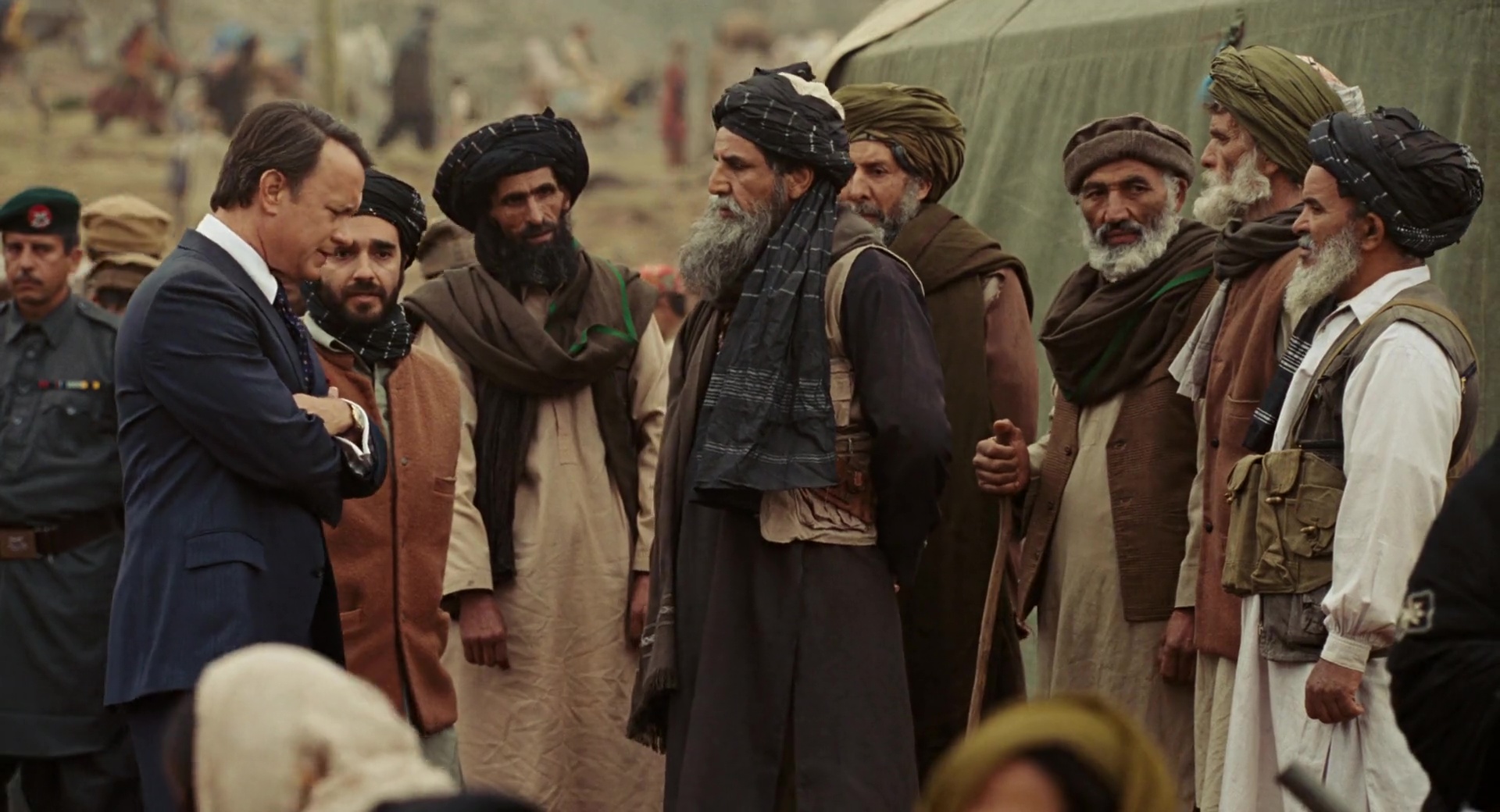 “These things happened.They were glorious and they changed the world… and then we fucked up the endgame.” – Charlie Wilson

Hot on the heels of the Syrian missile strike, it seems appropriate to talk about Mr. Charlie Wilson.

See, Charlie Wilson is responsible for “Operation Cyclone,” which was the largest covert war in CIA history. It supplied surface-to-air missiles and paramilitary troops to Afghanistan’s Mujahideen to fight Afghanistan’s Russian-backed government.

More than 20 billion dollars was spent to arm and train the Afghan resistance when all was said and done.

Then we left that resistance in the dust once the Soviets withdrew and they grew to hate the Americans that vowed to support them.

But that’s all postscript.

“Charlie Wilson’s War” is an intelligent, poignant, witty, and must-see film for anyone that cares about foreign policy, the nature of American priorities, or are looking to see just how often history can repeat itself.

Directed by Mike Nichols, written by Aaron Sorkin, and starring Tom Hanks, Julia Roberts, and Philip Seymour Hoffman, the movie is the story of Wilson’s covert war to arm the Afghan people against the overpowering force of Russia’s military.

Wilson himself is charming, rich, and like many politicians, his primary function in government is fundraising for the next election. He’s also under investigation by Rudy Giuliani for Cocaine use. He is what you expect of your typical politician. Charming, but vapid and somewhat lacking in a deliberate purpose.

Until he hears about a conflict in Afghanistan. Finding himself swayed by resistance fighters who are being killed by the USSR-backed Afghanistan government, Mr. Wilson suddenly has a purpose.

So he funds the rebels by teaming with CIA Operative Gust Arvakotos and rich socialite Joanne Herring. Wilson is able to secure hundreds of millions in funding via CIA’s anti-communism budget – ballooning it from 5 million dollars to well over 100 million dollars in a short time – providing surface to air missiles and training.

The funding is matched by Pakistan, who have a vested interest in the Mujahideen, and we’re off to the races – resulting the first major military defeat in Soviet history. The Russians withdraw their support from Afghanistan.

Upon Russian withdrawal, there was suddenly very little interest in Afghanistan. Wilson wanted to build schools and support the country economically. Instead, we left them in the lurch.

Ultimately, “Charlie Wilson’s War” is primarily about political process – as is Aaron Sorkin’s “West Wing”. It’s a procedural; how this war got started, how it was won, and how, as Wilson put it, we fucked up the end game.

And we sure did f*** it up. The implication of the ending, and of the original script, is abandoning Afghanistan bred resentment toward the United States, and lead to extremism – and if you believe the rumors, it ultimately resulted in the 9/11 attacks. Resulting in Americans being terrified of Islam and Arabs and, well, here we are.

No armies, just groups. No rules of war, just terror and the fear of it. Fighting enemies that use our old weapons and trucks and fighting techniques. Geopolitical hell.

But we weren’t. And we are still paying the price for our betrayal.

Now, as we yet again support the rebels in a country backed by Russia (and Iran) over a civil war in a country that has killed exactly zero americans, with zero congressional approval, I have to ask, has anyone read a history book?

Or seen this really quite excellent movie?! The historical facts may not be accurate, but the message, the ideas, the history, the implications – those all ring true, and are terrifying.

Now, in Syria, this airstrike that is being either derided or championed depending on who you ask, is another half-measure in a long line of them. Taking out an airfield won’t change the war. It won’t win the war.

It will prolong the war. It will result in more deaths and more destruction and more radicalization of most everyone living in that country. There’s a special kind of hypocrisy in the fact we’re willing to launch a missile attack in defense of their citizenry that isn’t even allowed in our own country.

I am absolutely certain this will go well.

(Sorry my sarcasm is showing.)

Anyway – “Charlie Wilson’s War” does a far better job than I ever could of explaining these things. Explaining how America loves to kick up dirt and then scurry off when public opinion gets heated or the zeitgeist moves on.

Wilson is responsible for putting the first chinks in the Soviet Union’s military armor at a time when they were our greatest enemy. He also, in a way, created our newest enemy – middle eastern extremists.

The lesson is this: No half measures. You either go in and you win and you stay until there is stability – and even then you still stay. We *still* have troops in South Korea and Germany.

Or you don’t go at all. We either support Syrian rebels all the way, or we don’t support them at all. Otherwise all we’re doing is spending billions of dollars to knock around someone else’s chess pieces and end up pissing off both the players.

And they’ll just end up resetting the board.

My Tin Foil Hat: Attempting to Understand What Happened in Syria