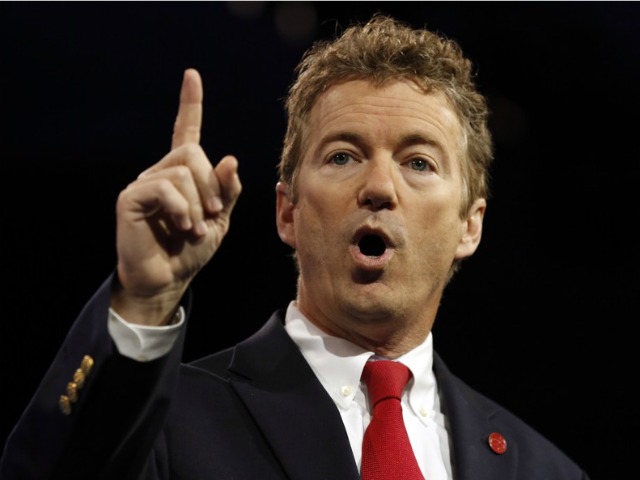 Rand Paul was conspicuously absent from the sixth GOP debate but the spirit of liberty still showed up.

As I watched the sixth GOP debate, I couldn’t help but shout at the top of my lungs these words from Cato’s Letters, “I know not what treason is if treason be not sapping and betraying the liberties of a people!”

I believe this outburst came right after Marco Rubio called Edward Snowden a traitor and showed support for more mass surveillance. “Look, the Second Amendment is not an option. It is not a suggestion,” declared Rubio at one point, showing his supposed constitutional bona fides. But not the Fourth Amendment, right Marco? The Fourth Amendment makes of us vulnerable and weak, right?

Why is it that every time I see Rubio speak, I have a sneaking suspicion he’s trying to shtup my grandmother and wriggle into the family will?

You know who’s not trying to seduce granny? Rand Paul. And if Rand Paul had been on the debate stage, he would have told Marco Rubio, “We need to defend the whole Bill of Rights. The 4th Amendment with same fervor as the 2nd.” But Rand Paul wasn’t allowed to speak this night.

I then remember also letting out another shout at the television. Words again from Cato’s Letters, “with the loss of liberty, shame and honor are lost.”

If I remember correctly, I yelled this at my television after Donald Trump said, “The police are the most mistreated people in this country,” or doubled down on his policy of banning Muslims or called for a trade war with China. No shame. No honor. Or, maybe it was after Ben Carson refered to restrictions on bombing civilians as “political correctness.” Or, maybe it was after Chris Christie called for the toppling of Assad.

It’s not clear. The whole GOP debate felt like a vapid exercise for men who in no way represented me to steal my liberty in the name of defending it. And though I have been hard on Rand Paul through this election cycle, I must say I missed his voice of reason in the debate.

But then it happened. Another shout filled the room. But the words weren’t coming from my lips. They were coming through the TV speakers.

Maybe the spirit of Cato is still alive in this nation. There is hope for the youth and the liberty movement yet.

One Chart Shows Just How Total Hillary’s Collapse Has Become

Girl Suspended Trying to Save Another Girl’s Life With Inhaler