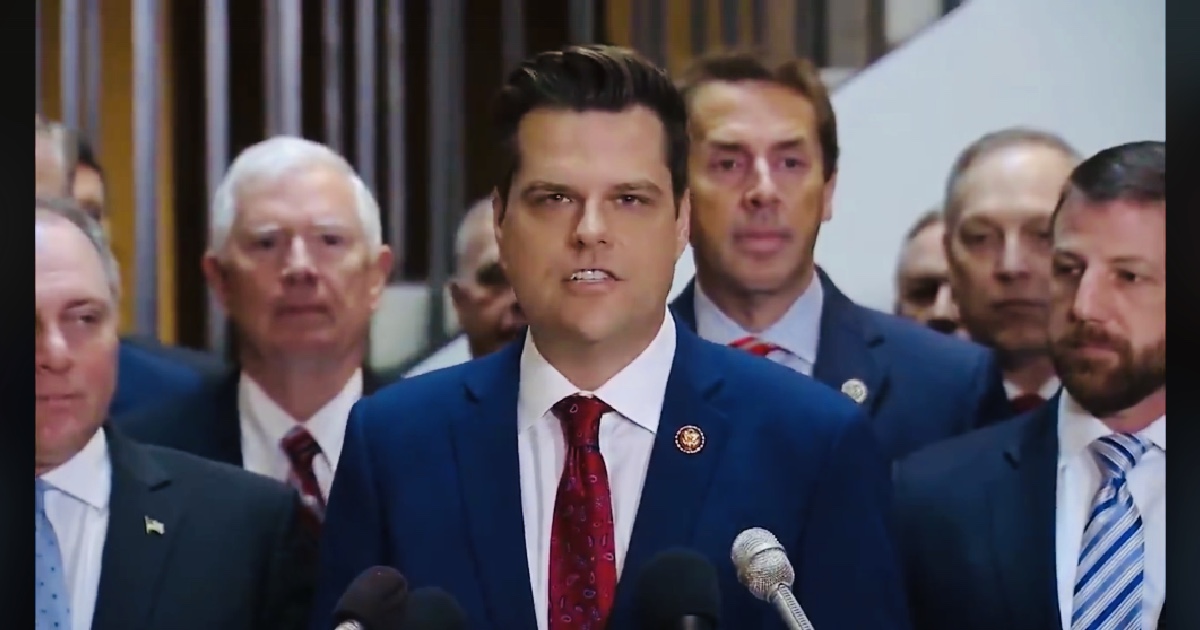 House Republicans briefly shut down a closed-door meeting Wednesday by storming the room where lawmakers were questioning a Defense Department official involving the impeachment inquiry into President Donald Trump.

Over a dozen Republican lawmakers gathered outside of the private meeting room Wednesday and told reporters that they would try to enter the closed-door deposition regarding the official impeachment inquiry into Trump. The House intelligence, foreign affairs and oversight committees are leading these proceedings after allegations that Trump asked Ukrainian officials to investigate former Vice President Joe Biden and his son Hunter Biden.

“We’re gonna go and see if we can get inside,” Republican Florida Rep. Matt Gaetz told reporters according to a video posted on Twitter.

The incident caused a delay in proceedings, Democratic Virginia Rep. Gerry Connolly said according to Rachael Bade, a Congress reporter for The Washington Post. The Democrats were “consulting Sargent at Arms,” she tweeted. Defense Department official Laura Cooper was testifying about allegations that the U.S. withheld military aid from Ukraine as Trump was allegedly trying to get officials to look into Joe Biden.

WATCH: here's the video of when 2 dozen GOP members, led by @mattgaetz entered the secure hearing room (SCIF) to interrupt witness testimony in the #ImpeachmentInquiry as they demand access, despite not being committee members. They're complaining it's a "Soviet-style process". pic.twitter.com/8KddYz3r9D

The group also entered the room with their electronics, which is prohibited, Connolly added. Republican Texas Rep. Mike Conaway reportedly collected the electronics.

Multiple Republicans have tried to access the depositions and get transcripts of the meetings in the past, the Washington Times reported. One Republican said that the group “got in” Wednesday but were asked to leave, Olivia Beavers, a Congress reporter for The Hill, tweeted.

My colleagues and I are holding a press conference lead by @RepMattGaetz outside Adam Schiff's secret impeachment chamber demanding transparency for the American people. pic.twitter.com/zCDpDDSlkz

The representatives that tried to enter Wednesday’s closed-door interview don’t sit on the committees that are leading the impeachment inquiry into Trump. Because of this, they have been barred from participating in or viewing the proceedings.

The official impeachment inquiry began on Sept. 24 following an August whistleblower complaint that cited a July 25 phone call between Trump and Ukrainian President Volodymyr Zelensky, which is when Trump allegedly asked about looking into Joe Biden.

Trump called on Republicans to “get tougher and fight” Monday against the House’s impeachment inquiry and also suggested that they need to stick together as some have openly critiqued the president.

Romney has openly criticized some of the president’s decisions, particularly noting that the July 25 phone call was “shocking” and a “mistake” during an exclusive interview on “Axios on HBO” Sunday.

“We certainly can’t have presidents asking foreign countries to provide something of political value. That is, after all, against the law,” Romney said.

Egg Production in the USA

Warren Is ‘S******g On’ The American Dream, Billionaire Investor Says