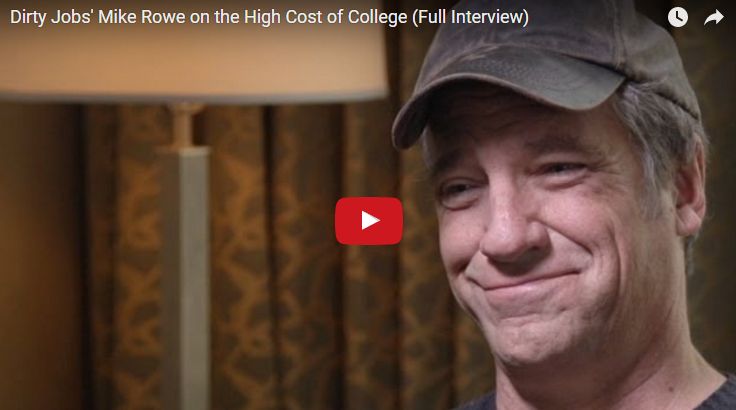 Mike Rowe made headlines by posting calling presidential candidate Bernie Sanders out on Facebook over his rhetoric on “free” college. Now Rowe has sat down with Reason TV to talk more about the true cost of college

Bernie Sanders tweets, “At the end of the day, providing a path to go to college is a helluva lot cheaper than putting people on a path to jail.”

I wonder sometimes, if the best way to question the increasingly dangerous idea that a college education is the best path for the most people, is to stop fighting the sentiment directly, and simply shine a light on the knuckleheads who continue to perpetuate this nonsense. This latest tweet from Bernie Sanders is a prime example. In less than 140 characters, he’s managed to imply that a path to prison is the most likely alternative to a path to college. Pardon my acronym, but…WTF!?…

It’s a cautionary tale as predictable as it is false. But now, as people are slowly starting to understand the obscenity of 1.3 trillion dollars in student loans, along with the abundance of opportunity for those with the proper training, it seems the proponents of “college for all” need something even more frightening than the prospect of a career in the trades to frighten the next class into signing on the dotted line. According to Senator Sanders, that “something,” is a path to jail.

I try not to be political on this page, because the truth is, arrogance and elitism are alive and well in every corner of every party—especially with respect to this topic. But I have to admit, this is the first time I’ve seen an elected official support the hyper-inflated cost of a diploma by juxtaposing it with the hyper-inflated cost of incarceration. Honestly, I’m not sure what to make of it.