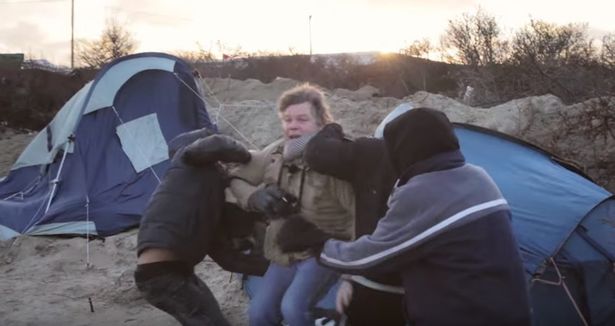 Two Dutch, pro-immigration filmmakers published a video Saturday of themselves getting brutally robbed at a refugee camp in Calais, France, known as “The Jungle.”

Journalist Maaike Engels and photographer Teun Voeten were attacked at knife point while obtaining footage for their documentary “Calais: Welcome to “The Jungle.” The video shows Voeten getting tackled down by three masked men, before one man threatens Engels with a knife.

The Jungle has been home to 5,000 refugees and is located close to the tunnel connecting France and the United Kingdom. Refugees aspiring to settle in the U.K. began occupying the ground during the fall and it has since grown to a large community on the side of the highway.

Authorities started demolishing the campsite Monday and moved the migrants to containers next to The Jungle. The refugees have violently protested the eviction by throwing Molotov cocktails at police. Two bulldozers were also set on fire Friday morning, which postponed the eviction procedure.

Engels — who is making the documentary to portray refugees in a good light — said it was important to publish the video to show the full picture of The Jungle.

“Within every community, among the good ones, you’ll always find a couple of assholes,” Engels wrote on her Facebook page.  “‘The Jungle’ is no exception.”

Engels went on to explain the behavior with the simple condition the migrants live under in The Jungle.

“But I guess living under such deplorable conditions the less creative, intelligent and ambitious are very likely to become small criminals, because they’ve got nothing higher to aim at,” Engels said.