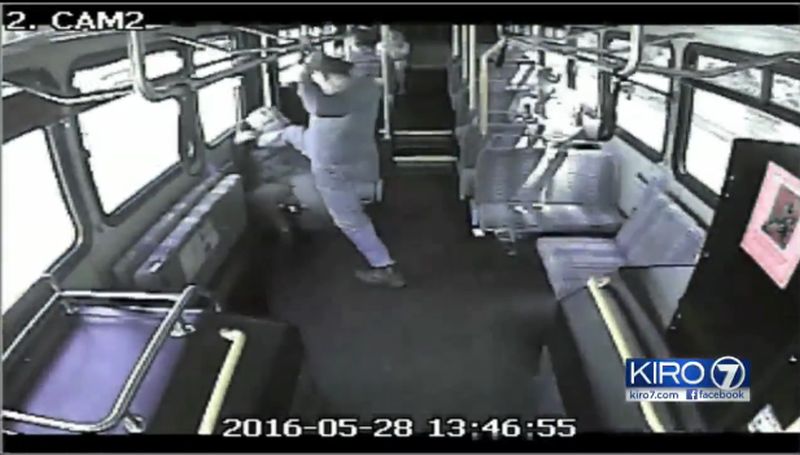 An attack on an 80-year-old woman showcases a disturbing trend in society; people will idly watch others being victimized and will say nothing. Here many watch and some flee rather than attempting to help the victim or the bus driver.

The incident occurred Saturday afternoon in Port Angeles, when a man, identified as 59-year-old Riley Edge White, rises from his seat, walks over to an 80-year-old woman and kicks her in the face. Surveillance cameras on the bus captured the violent attack.

As the woman screamed, the man grabbed her head, threw her to the floor and dragged her. After hearing the woman scream, the bus driver pulled over, yells at the man to stop and manages to pull him away.

The man then chokes the driver, with less than a dozen riders watch from the back of the bus, many of them on their cellphones. The man again attacked his bloodied first victim and the bus driver opens the doors, allowing the other riders to escape.

The driver called for help and the man pushed the elderly woman out of the bus. The bus drier ultimately managed to escape and disable the vehicle’s battery, which prevented the attacker from driving off with the bus.

What is happening in society where people will cower away and watch others become victims? Watch the video of the attack below.

WARNING: SOME MAY FIND THIS VIDEO GRAPHIC