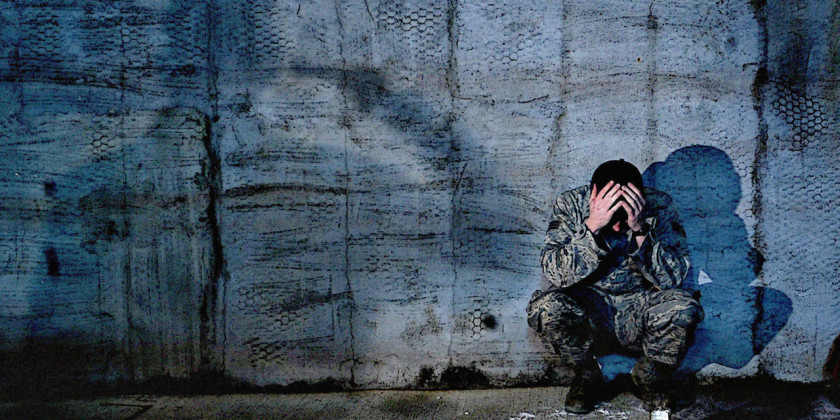 An Illinois veteran in distress called the Department of Veterans Affairs’ suicide hotline in July 2015, but no one picked up. So, he laid down on nearby train tracks and waited for death.

The body of 30-year old Thomas Young was found July 23, 2015 after being struck by a Metra train outside of Chicago. The next day, the veteran’s phone rang — it was VA’s emergency line returning his call.

Young had returned from his second tour of Iraq in 2004 with severe PTSD. He tried to go to the Hines VA hospital in Illinois for help with a drinking problem, but they turned him away, saying they didn’t have any space available since he wasn’t suicidal.

His brother said he believes Young called the VA hotline on July 22 or 23. He laid down in front of a train on July 23, leaving behind a wife and two daughters.

He had previously tried to kill himself by passing out on train tracks, but someone always carried him off the tracks before he was hit. He tried to go back to Hines, but was put on a wait list.

The incident was revealed in a hearing Thursday by Sen. Mark Kirk, chairman of the subcommittee on VA appropriations.

The government-run healthcare provider had been alerted to problems with its suicide hotline four months prior to Young’s death, but didn’t fix the issues. In February 2015, Scripps News Service published video of one vet waiting on hold for more than half an hour, while another told the service that when she called crying and huddled underneath a desk, callous workers merely transferred her repeatedly. Someone eventually said she’d get a message back, but no one ever called. She got in her car to drive off a bridge, but changed her mind.

Scripps asked for records on call center statistics, but the VA wouldn’t provide them. The VA said around that time that it was making changes.

“If the changes occurred months ago, how could Tom Young have been sent to voicemail just 7 months ago?” Kirk asked.

VA undersecretary Dr. David Shulkin said what happened to Young was “totally unacceptable” and “there was a two-week period of time where calls went to voicemail.” Shulkin blamed a contractor for the problem, but could not say what the name of the contractor was, pledging to follow up.

Kirk had called for the resignation of the VA manager overseeing the hotline, but the VA seemed to try to mock the senator for using an outdated name, while simultaneously refusing to tell him the names of the people who have held the job more recently. Shulkin said at the hearing the job had just turned over yet again, this time to someone named Matt Ettius.

Last week, the VA sent a press release noting “key hires made in the last year to lead the Crisis Line, including a director with extensive clinical social work background”–a fairly obvious and unremarkable background for someone leading a high-profile suicide hotline, seeming to imply previous leaders did not have even that.

CBS News reported years ago that Dr. Ira Katz, then a top staffer in the VA’s office of mental health, wrote “Shh! Our suicide prevention coordinators are identifying about 1000 suicide attempts per month among the veterans we see in our medical facilities,” under the subject line “Not for the CBS News Interview.”

“Katz’s e-mail was written shortly after the VA provided CBS News data showing there were only 790 attempted suicides in all 2007 – a fraction of Katz’s estimate,” CBS wrote.

Katz then insisted publicly that there was not an epidemic of suicides among vets. Multiple members of Congress demanded Katz’ resignation. The VA told senators Thursday that he still works there.

Kirk noted that Congress has given the VA more authority to fire top employees for a variety of reasons, and asked if the VA would use it on Katz, given the data falsification — which has been a recurring theme with serious misconduct at the department. But the VA indicated it would not use its firing authority.

An inspector general’s report on the Veterans Crisis Line released last month found that “3 of the 41 complaints made to the VCL in FY 2014 were claims that calls were transferred to a voicemail system. Our review identified over 20 calls that were routed to voicemail at 1 of the backup centers. When VCL management investigated these complaints, they discovered that the backup center staff were not aware the voicemail system existed; thus, they did not return these calls.”

They also found that call center operators were not completing training. “24 of the 27 (89 percent) orientation checklists did not have all of the checklist items marked as completed and/or were not signed or dated by the responders’ supervisors. We also found no evidence that 18 of the 33 (55 percent) responders had taken a postorientation test.”

“We also found that callers had made numerous complaints of long wait times for responders, being put ‘on hold,’ or calls ‘not being put through’ to a responder. This could account for the issue of calls not being answered by the VCL staff or backup center staff. However, VCL management had no data to ascertain whether the issues were valid, thus we could not substantiate that VCL and backup center staff did not answer calls.”

Trump is Lying, IRS Not Keeping Him from Disclosing Taxes (Video)