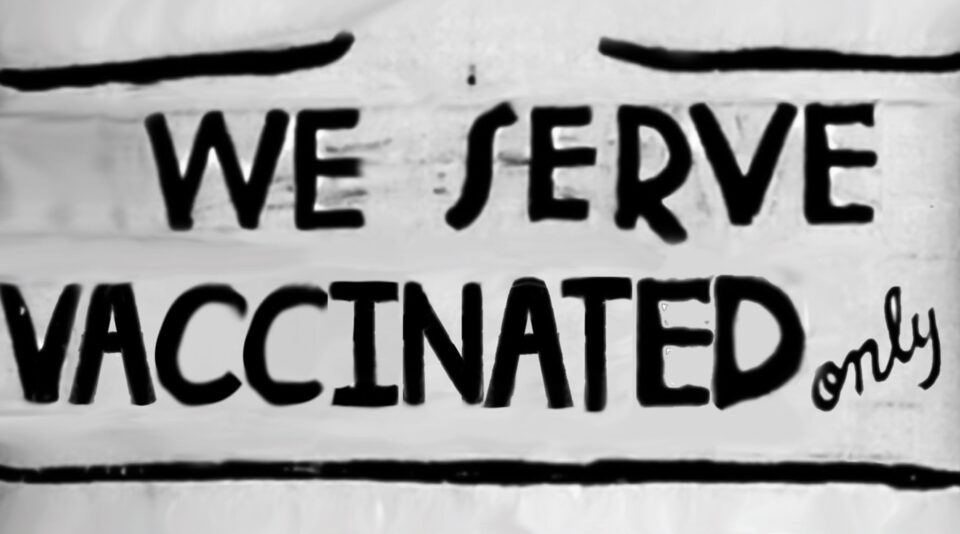 We talk a lot about systemic racism in this country, but many of the policies pushed by those on the right and left would continue to enforce and even worsen the racial bias within our laws. A recent example of that is the suggestion of vaccine passports.

Why would vaccine passports enforce systemic racism, you might ask? Let’s unpack this. We know communities of color have not only been most impacted by the disease, but they’ve also been slower to adopt the vaccine. The Centers for Disease Control and Prevention’s (“CDC”) latest report states that of those who have taken at least one dose of the COVID vaccine, only 11.2 percent were Hispanic, 8.5 were Black, 5.3 were Asian, 1.3 were American Indian, and 0.3 were Native Hawaiian. Those numbers are incredibly shocking when you compare them to the percentage of vaccinated White Americans currently standing at 64.8 percent. That means these communities will likely lag behind others in their ability to get a vaccine passport. And while access and distribution contribute to these issues, there are deeper, historical aspects at play. Many people of color, especially the African-American community, have a long history of distrust when it comes to new medical procedures and the government – and rightfully so.

It is no secret that African-Americans have suffered greatly throughout this nation’s history. Furthermore, it is reasonable for African-Americans to feel skepticism whenever the Government mandates a policy that would hinder their freedoms because of the long history of governmental policies used to oppress minorities. As Dorothy Roberts (founding director of the University of Pennsylvania Program on Race, Science & Society) articulates in an interview for WebMD, “it’s not that Black people have an irrational fear of new medical technologies, it’s that they have an awareness of a long history of being disrespected, mistreated, and violated by the government.” There are many prominent examples of the United States Government using the African-American population for medical experiments. One of the most notorious medical experiments conducted on the African-American population was the Tuskegee trials.

In a Harvard case study of the Tuskegee Syphilis experiments, Allan Brandt stated that the U.S. Public Health Service (“USPHS”) department experimented on 400 syphilitic men and 200 uninfected men in Macon County, Alabama. In the study, the participants were promised that they would get treated for syphilis once medical treatment became available. However, that was far from being true, and instead, when penicillin became known as a treatment for syphilis, the experiment participants did not receive the therapy as promised. It gets even worse as Brandt explains, “on several occasions, the USPHS actually sought to prevent treatment. Moreover, a committee at the federally operated CDC decided in 1969 that the study should be continued. Only in 1972, when accounts of the study first appeared in the national press, did the Department of Health, Education and Welfare halt the experiment.” Even though I concede that this might not be the main reason African-Americans are hesitant to receive the vaccine, it is a valid reason why African-Americans’ vaccination rates are extremely low.

No matter how many free donuts Krispy Kreme gives away to those who received the COVID vaccine, the majority of minorities are refusing to get the COVID vaccine. The rate of COVID vaccination among people of color is extremely low. Hispanic vaccination numbers are also much lower than White Americans. As previously stated, accessibility of the vaccine might be one reason why the rate is low; however, the lower rate could be due to the mistrust Hispanics have of the Government. The Hispanic population shares the same skepticism that the African-American population has about trusting the Government because of a history of abuse. For example, the disproportionate sterilization of Hispanics under California’s Eugenic Sterilization Program from 1920–1945 and, as Alex Wellerstein writes in the States of Eugenics: Institutions and Practices of Compulsory Sterilization, the government laws which authorized hospitals and prisons to sterilize patients if the procedure would be “beneficial and conducive to the benefit of the physical, mental or moral condition.” The majority of those sterilized were Hispanic, thus creating a trust issue between the government and Hispanics that has lasted till today. The Eugenic Sterilization Program is one example of how the Hispanic population has been treated. In many cases, they are still mistreated by the medical community, which reinforces their skepticism.

UNDOCUMENTED IMMIGRANTS AND FEAR OF GOVERNMENT:

Who else is harmed by the vaccine passport, you might ask? There are currently 10.5 million undocumented immigrants, and it is no secret that many undocumented immigrants live in the shadows of our society. Furthermore, many live in a persistent state of fear from the Government because of the fear of getting caught. That fear is justified because our Government has proven that it will go to extremes, employing deceptive methods to deport them. For example, they’ve set up fake Universities and carried out various ICE sting operations to catch immigrants. Though immigrants are often used by the left and right as a political pawn to gain more votes, the requirement for a COVID vaccine to get a vaccine passport will continue to enforce the fear they have of the government. Once again, that means undocumented immigrants will likely lag behind others in their ability to get a vaccine passport; thus, creating unintended consequences.

The purpose of this article is to shed light on the unintended consequences of a vaccine passport and the type of society it will create. And the most prominent among those is the likelihood of this program furthering systemic racism and making it harder for people of color to obtain basic services. This will breed more discrimination, segregation, and division in our society. It will likely lead to further police brutality against these populations as cops will be asked to enforce these laws against them. It’s easy to envision a modern-day Jim Crow system resulting from this misguided policy.

In 1936, the first issue of “The Green Book” was published in the United States. African-Americans used the Green Book during the segregation era in the United States for the sole purpose of locating businesses that would accept African-American customers. The guide’s final publication came a little after the Civil Rights Act of 1964 was passed, in 1967. With the implementation of a vaccine passport in a society where almost half of the population will more than likely refuse to take the COVID vaccine, minorities will again have to create a modern-day Green Book to navigate this country. We are already witnessing businesses and even States informing the public that they will not require vaccine passports. In other words, they are saying “Non-vaccinated welcome” – enticing those who do not have the vaccine to shop and vacation in their state.

On the contrary, we see businesses, for example, Norweigan Cruise Line and Silversea Cruises, stating that they will require proof of COVID vaccination for all customers. These are early signs of businesses putting up what I would call modern-day “Whites Only” signs in the form of “Vaccinated-Only” signs. This creates a segregated society, but it will also fuel anger towards those on the opposite side. It is no secret that the majority of Corporate America is on the left side of the political spectrum. With that being the case, the majority of these corporations will bow down to any vaccine passport requirements, thus, creating obstacles for those who will no longer be able to shop in their facilities.

History has taught us that humans will find different ways to acquire what they want or need to survive. Here, implementing a vaccine passport will segregate our country and create a black-market economy because individuals who are lagging in getting the vaccine will have to find an alternative way to buy what they need to survive. This is especially true if corporate America is complicit and requires a vaccine passport to enter their establishment. More often than not, black markets prey on those who need to purchase essential items in the black market through ridiculous prices, fake items, or other deceptive tactics. That means proponents of the vaccine passport will enforce systemic racism by supporting the implementation of such a policy.

In the end, the idea of implementing vaccine passports will enforce systemic racism across the nation at levels never seen since the Jim Crow era. The time has come to stand up and fight against a tyrannical policy. This is not the time to sit on the sidelines and stay quiet. As libertarians, we’ve warned about this tyrannical power grab for many years. Now, it is time to stand up and have the courage to fight back. Vaccine passports are racist.

Things You Can Do With a Nursing Degree

Luis Angeles is a recent graduate of UIC John Marshall Law School and a political activist. He has campaigned for both Ron and Rand Paul during their presidential runs. Among his contributions are translating press releases from English to Spanish and giving speeches on behalf of the candidates. Angeles has also helped elect liberty-minded candidates through the Young Americans for Liberty's (YAL) Operation Win at The Door program.