After declaring American grammar “racist” and an “unjust language structure,” the University of Washington, Tacoma has responded by blasting media coverage of the statement as “completely inaccurate.”

Along with the previous two assertions, the poster at the University of Washington, Tacoma (UW) states that “racism is the normal condition of things” and that UW Tacoma will prioritize rhetoric over “grammatical ‘correctness,’” as reported by The Daily Caller News Foundation Monday, Feb. 20, 2017.

“We understand the UW Tacoma Writing Center’s ‘Statement on Antiracist and Social Justice Work in the Writing Center’ has been repeatedly misrepresented by some issues-oriented blogs based in other states,” said the university Thursday, Feb. 23. “These representations are completely inaccurate.”

UW Tacoma goes on to claim that its statement does not suggest changing “the standard for how UW Tacoma teaches commonly accepted English, grammar and composition,” citing the rigor of its written assessments and the general success of its graduates as evidence.

The university claims that the Writing Center’s statement is about “representing the values” of the Center, such as being welcoming to all students and inclusiveness.

“The statement also describes the Center’s commitment to helping students critically understand the broader context of language, including how different dialects are judged in various settings,” alleges UW Tacoma. “The Center works to raise awareness that language is part of a larger system than [sic] can unintentionally perpetuate racial and social inequities. The term ‘racism’ in this context is not about people behaving badly; it is about helping students understand language as part of a larger cultural system.”

UW Tacoma says that understanding the “larger system than [sic] can unintentionally perpetuate racial and social inequities,” adding that students should be made to”understand they have choices in how they use language” and given the tools.

The Daily Caller News Foundation reached out to Tacoma’s Writing Center with the following two messages questioning the allegations of inaccuracy, but received no response in time for publication: Tacoma’s Writing Center did apparently have something to say, as reported by The Olympian.

“For us to give [writers] one standard would be a disservice. It might suggest that the way they talk or speak in other areas of life is devalued or not good enough, or illiterate, and that’s just not the case,” a spokesperson explained.

“I think this is more self-righteous chest-thumping than it is really trying to address a problem,”  said Matt Manweller, a Washington State representative, in contrast. “They’re really not doing this for the benefit of the kids that they’re teaching. We do not want to send a message to students that you can hide behind cultural differences to justify poor academic performance.” 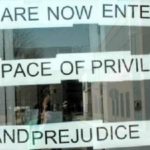