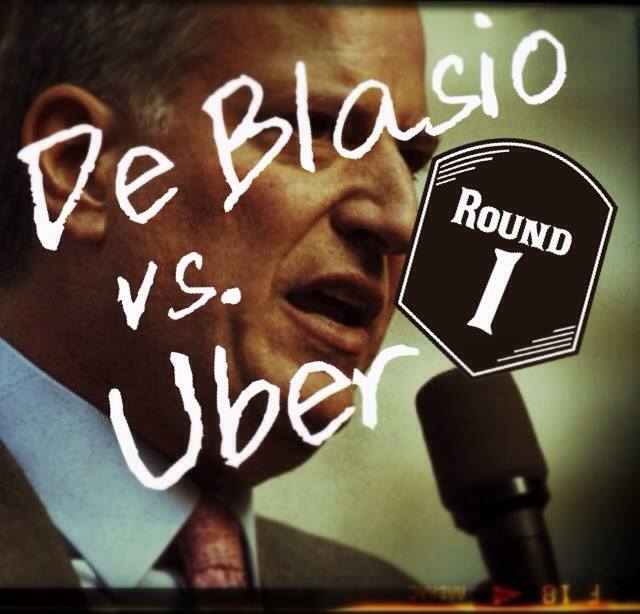 “One of the great mistakes is to judge policies and programs by their intentions rather than their results.”   -Milton Friedman

New York City, NY-  Month after month of state and county level attacks throughout the country on app-based ridesharing companies such as Uber and Lyft, have finally caused Uber General Manager Josh Mohrer to throw “down the gauntlet” to NYC Mayor Bill de Blasio.

In an open letter to the Mayor, Mohrer addressed his opposition to a bill currently in the city council which would place a cap on the number of Uber drivers allowed to operate in New York City. The bill is meant to ensure limited competition for the NYC medallion-based taxi union, which de Blasio is keen on protecting. In the letter, Mohrer issued the following challenge to the left-wing populist Mayor:

“When your proposal to cap Uber was introduced, your administration said it was about congestion. The op-ed you wrote in the New York Daily News this weekend was about everything but congestion…If you have new concerns, we want to discuss them, face-to-face, and invite you to do so in a live-streamed conversation so all New Yorkers can watch.”

The City Council Speaker Melissa Mark-Viverito recently stated in a radio interview that the purpose of the bill was to fix “noted concerns about clogged streets and increased exhaust emissions”, yet in regards to the op-ed Mohrer references, which was written by de Blasio and published in the New York Daily News, the Mayor gave a tone contrary to simply pollution and congested streets:

“When you consider what’s at stake — from ensuring workers can make a decent living, to managing the surge of more than 2,000 new cars on our streets every month, to protecting consumers from overcharges, to making sure we have more accessible vehicles for New Yorkers with disabilities — it’s our responsibility to act…

We need to find a way to manage the huge increase in new vehicles to keep our streets moving, protect air quality and make sure our buses and other vehicles can also get around…”

De Blasio constantly hits two main points throughout the piece, 1) that the drivers who pay for the medallions in order to operate are more important than other ridesharing services and 2) that the reason why this is suddenly being pushed has to do primarily with the green agenda, and not the taxi unions that donate out the nose to NYC Democrats in order to protect them because their industry is collapsing.

Possibly a coincidence, de Blasio’s arguments regarding protecting workers rights and wages came almost a week after former Secretary of State, and 2016 presidential candidate, Hillary Clinton, came to Manhattan to discuss reforms on the “sharing/contractor economy.” Clinton discussed changing the market’s playing field by creating an increase of regulation on app based technology services and providers such as Uber, Lyft, and AIRBNB.  If de Blasio is able to place a cap on further regulation and supervision of app based ridesharing services, this could be a window into the future of what a possible Clinton administration could have in store for new and existing tech services.

Uber however, has at least been willing to compromise profits in order to bring down the level of animosity between themselves and the unions, by proposing a counter bill which “would only be able to increase their number of vehicles by 1% every year.” This translates into Uber only being able to hire 201 new drivers next year. To put things into perspective, Uber alone has been hiring 25,000 new contractors weekly, which would mean this bill would mean fewer people, and fewer people means fewer jobs overall.

According to a recent article from the Business Insider’s Maya Kosoff,  “the mayor was [then] asked about the invitation to debate with Uber. His reply, according to the New York Times’ Matt Flegenheimer: “I don’t debate with private corporations.”

Trying to counteract the massive taxi union support for the bill to place a cap on Uber drivers, the company recently offered free Uberpool rides to people willing to participate in a protest organized by Uber, in order to bring awareness to the bill which won’t simply effect Uber drivers in NYC, but will have ramifications on ridesharing companies throughout the country. In the letter to customers from Uber central, it read:

“We need your help. Mayor de Blasio is supporting a bill that would stop thousands of new drivers from joining the Uber platform. This bill would destroy 10,000 job opportunities for New Yorkers in just one year, and result in longer wait times, higher prices and less reliable service for riders.”

The Mayors office has not released a statement following the Mayor’s refusal to debate and discuss the future of Uber in NYC.