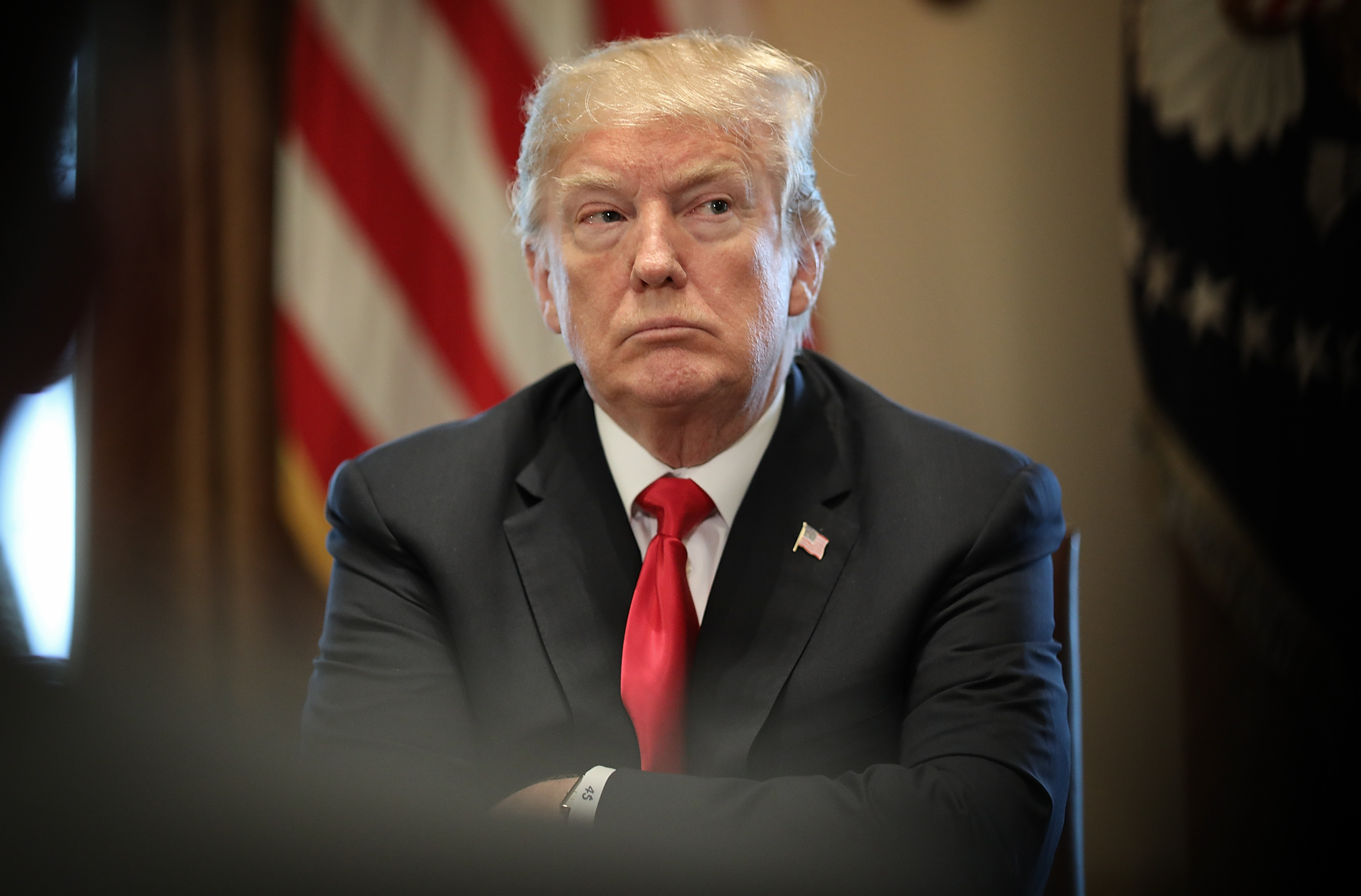 President Donald Trump is trying to advance two conflicting narratives about the US economy. A pair of tweets the president recently sent out within an hour of each other demonstrates the bizarre balancing act he’s trying to maintain.

The Fake News LameStream Media is doing everything possible the “create” a U.S. recession, even though the numbers & facts are working totally in the opposite direction. They would be willing to hurt many people, but that doesn’t matter to them. Our Economy is sooo strong, sorry!

Doing great with China and other Trade Deals. The only problem we have is Jay Powell and the Fed. He’s like a golfer who can’t putt, has no touch. Big U.S. growth if he does the right thing, BIG CUT – but don’t count on him! So far he has called it wrong, and only let us down….

On the one hand, Trump continues to insist that the US economy is “sooo strong.” He often talks up the economy in hyperbolic terms. He’s gone as far as to call it “the greatest economy in the history of our country.”

On the other hand, the president continues to call for and get the kind of Keynesian monetary and fiscal stimulus that one would expect to see in the depths of a deep recession.

…..The Fed Rate, over a fairly short period of time, should be reduced by at least 100 basis points, with perhaps some quantitative easing as well. If that happened, our Economy would be even better, and the World Economy would be greatly and quickly enhanced-good for everyone!

To put Trump’s demand into perspective, a 100 basis point cut would take the interest rate down to 1 percent. That would equal the lowest level Alan Greenspan pushed interest rates down to in 2003 during the depths of the recession that followed the popping of the dot-com bubble and the 9/11 terror attacks.

In fact, the Trump economy has already benefited tremendously from easy monetary policy. Although the Federal Reserve began to normalize rates in December 2015 after holding them at zero for nearly a decade, it didn’t get very far. The central bank nudged rates up four times in 2018. But in December of that year, the stock market crashed, and the Fed reversed course after its December hike. First, it gave us the “Powell Pause,” followed by a rate cut in July. The Fed’s march toward “normal” got us to a paltry 2.5 percent.

In contrast, after Greenspan dropped rates to 1 percent during the post-dot-com bubble recession, the Fed pushed rates up to 5.25 percent before the ensuing housing bubble popped in 2007.

Spending Out the Wazoo

Fiscal stimulus in the form of government deficit spending has also helped prop up the economy. In a nutshell, the federal government has spent money out the wazoo since Trump took office.

To date, the federal government has spent over $3.7 trillion in fiscal 2019, according to the latest Treasury Department report. Year-over-year spending growth is at a nearly nine-year high. Uncle Sam spent $371 billion in July alone. That was 23 percent more than the government spent in July 2018.

With two months to go, the fiscal 2019 budget deficit has already topped the shortfall for all of 2018. And the 2018 deficit came in as the largest in six years. Ryan McMaken parsed out the numbers in a recent article published by the Mises Wire. The last time the deficit was this high was in fiscal 2012 when the budget shortfall reached nearly $1.1 trillion. In 2009, at the height of the Great Recession-stimulus-panic, the deficit reached $1.4 trillion. Deficits typically shrink significantly during a post-recession recovery and then spike during the subsequent downturn. As McMaken notes, after the 1990-91 recession, deficits generally got smaller before growing again in the wake of the dot-com bust. Deficits then shrank during the short expansion from 2002 to 2007. During the first part of the post-Great Recession expansion, deficits shrank again. But since late 2015, deficits have only gotten larger and are quickly heading toward some of the largest non-recession deficits we’ve ever seen.

The 2019 deficit will likely eclipse $1 trillion. This is a recession-like deficit even as the economy is supposedly booming.

What Does It All Mean?

In simple terms, the “great” Trump economy is being propped up by extraordinary stimulus—both monetary and fiscal. It’s the kind of stimulus you’d expect during a steep economic downturn. And the president wants more of it.

This reveals the incoherence of his economic messaging. Why do you need extraordinary stimulus if you have the best economy in the history of forever? Why do you need interest rates set at the level they were during the recession that followed the popping dot-com bubble?

The reality is that the Federal Reserve’s easy-money policies have driven economic growth and asset prices since the 2008 financial crisis. It drove economic growth and the surge in the stock markets during the later years of the Obama administration, and it continued to drive that growth after Trump took office.

Ironically, the president accurately called the stock market a “big, fat, ugly bubble” during the 2016 campaign. After he took up residence in the Oval Office, he branded the bubble with a big Trump “T” and adopted it as his own.

This also explains why Trump has suddenly started talking about tax cuts. And there is no mention of spending cuts. In fact, Trump recently signed a bipartisan budget deal that will increase discretionary spending from $1.32 trillion in the current fiscal year to $1.37 trillion in fiscal 2020 and then raise it again to $1.375 trillion the year after that. The deal will allow for an increase in both domestic and military spending.

Tax cuts with no spending cuts mean more deficit spending. This is pure Keynesian fiscal stimulus. Again, why is this necessary if the economy is “great”?

The fact is the economy isn’t great. It hasn’t been great for years. It’s a bubble economy built on debt facilitated by easy-money central banking.

The US economy is heading for a recession. The recent recession chatter isn’t some kind of evil media plot to make Trump look bad. A recession has been looming for a long time. Trump has managed to delay the inevitable thanks to tax cuts and recession-like deficit spending. Jerome Powell lent him a helping hand with a little monetary stimulus when the Fed did a 180 on interest rate normalization earlier this year and cut rates in July. But you can only kick the can down the road for so long until you run out of road.

The economics of the Fed-induced boom-bust cycle guarantee a recession. You can’t really blame Trump, but politics being what they are, he will get the blame. And that’s mostly on him. After all, he took credit for the bubble. That means he gets the blame when it pops.

The president will undoubtedly continue to maintain this bizarre balancing act, but a fall isn’t far away.