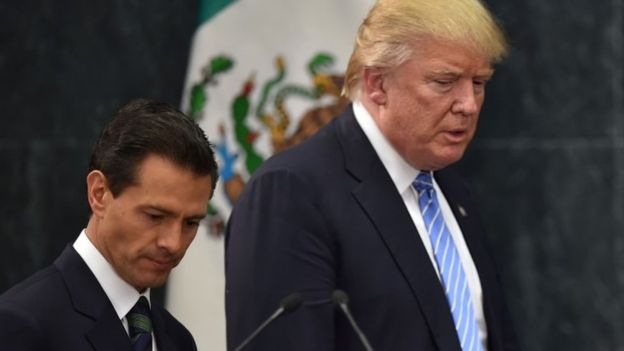 The Mexican government disputed an Associated Press report Thursday that President Donald Trump threatened to invade the country during a phone call with President Enrique Pena Nieto, saying in a statement he did no such thing.

“The assertions that you make about said conversation do not correspond to the reality of it,” the government said in a statement Thursday, following the AP report, which was quickly seized on and repeated by other mainstream outlets.

“It’s totally false,” Nieto added in a radio interview. “At no time did President Trump say such a thing.”

The AP report claimed Trump had “warned” Nieto he would invade the country and take care of its “bad hombres,” if the Mexican military doesn’t prove up to the task. The report was based on excerpts of the phone call that the story itself notes lacked “context” and description of “tone.”

“You have a bunch of bad hombres down there,” Trump told Nieto, according to the excerpt. “You aren’t doing enough to stop them. I think your military is scared. Our military isn’t, so I just might send them down to take care of it.”

Turns out the remarks were a joke, which the AP reported out later Thursday, after Mexico and the White House denied its characterization of the exchange.

“The tone was constructive,” Mexico said in the statement, adding: “And it was agreed by the presidents to continue working and that the teams will continue to meet frequently to construct an agreement that is positive for Mexico and for the United States.”

The Washington Post issued a correction to a separate negatively framed story on a phone call Trump had with Australia’s prime minister Saturday, which noted a reference to the AP report on the Mexico call had been removed from the article.

“This article has been updated and a reference to an AP report on the details of a phone conversation between President Trump and Mexican President Enrique Pena Nieto removed because they could not be independently confirmed,” an editor’s note on the story now reads.