Trump rode to the White House on the wave of economic populism. Throughout the campaign, the now President-Elect stated his desire to be the “greatest jobs president in history,” pledging to tear up trade deals and punish companies that relocate overseas. His brand of economics differentiated him from most other members of the pack and from most candidates since the establishment of a post-NAFTA free trade consensus.

Many true free-market conservatives have been quite alarmed by Trump’s policy proposals, going as far as to call him out for it publicly. Libertarian-leaning Congressman Justin Amash (R-Mich.) called out Trump on twitter, expressing concern for his tendency to interfere with market forces.

Not the president(-elect)’s job. We live in a constitutional republic, not an autocracy. Business-specific meddling shouldn’t be normalized. https://t.co/usHTsZaw46

Amash and Palin certainly are not alone. When most people think of Republican trade policy, they think of the relatively free-market approach taken by GOP administrations post-Ronald Reagan.

“I don’t believe the American people are afraid of competition,” Reagan said in 1987. “When you hear talk about a tough trade bill, remember that being tough on trade and commerce, the lifeblood of the economy, will have the worst possible consequences for the consumer and the American worker…The Government should work to create the conditions in which fair trade will flourish. We should be trying to foster the growth of two-way trade, not trying to put up roadblocks, to open foreign markets, not close our own.

But Trump has completely rejected this philosophy. In a debate against Democratic challenger, he said  “I did disagree with Ronald Reagan very strongly on trade. I disagreed with him. We should have been much tougher on trade even then. I’ve been waiting for years. Nobody does it right.”

Last month, Trump threatened government force against companies wanting to leave the country, saying “A Trump administration will stop the jobs from leaving America…If our companies want to leave, there are consequences.” When pressed by Fox News’ Chris Wallace about the anti-free market nature of his positions, the President-Elect said “That’s not free market when they go out and they move and they sell back into our country. That’s the dumb market, okay? That’s the dumb market.”

Reagan’s GOP and Trumps’ are at ideological odds with one another. However, it is Trump’s corporatist vision that has  been the historical norm for the party of Lincoln. Before William F. Buckley and Barry Goldwater reshaped the Republican Party in their image, the Grand Old Party was backed by domestic business interests pushing for trade protectionism. High tariffs were the norm, and free trade was not on the party’s radar.

Before the Kansas-Nebraska act of 1854, the Democrats were rivaled by the Whig Party of Henry Clay and Daniel Webster. The Whigs based their domestic policy on Clay’s “American System,” which called for a trio of state-driven economic endeavors: high protective tariffs, a strong central bank, and federally funded internal improvements.

The tariff was an essential element to Whig policy, and northern congressmen were pressured by their constituents to protect their industry from cheaper, higher quality foreign competition. Sound familiar?

Under Whig control, import taxes rose so high that South Carolina nullified the “Tariff of Abominations” and forced the Federal Government to pass a lower compromise tariff in 1833.

Democrats maintained solid control of the White House and Congress and lowered rates consistently during the antebellum period. When the Whigs were ultimately destroyed by their inability to take a stand against the institution of slavery, they were replaced by the new, but equally protectionist, Republican Party.

Most of the earliest Republicans were old Whigs. When the party was created around an anti-slavery expansion platform, the old Whigs supplanted their economic policy into the new party.  The GOP was also a purely regional faction that did not even bother to open offices south of the Mason-Dixon. In fact, Lincoln was elected without receiving any electoral votes from any slave state.

With a northeastern constituency, came requests for government policy favoring northeastern interests. Since the industrial revolution,  New England and the Mid-Atlantic states based their economies in industrial manufacturing – aided by interventionist government policy. The Democrats worked to remove trade barriers, but Republicans wanted to bring them back.  In the Republicans’ 1860 platform, the party stated “sound policy requires such an adjustment of these imports as to encourage the development of the industrial interests of the whole country.”

When the Democrats left with their seceding states during the Civil War, the Republicans were left unchecked. 1861, they passed the Morrill Tariff, which raised the effective rate collected on dutiable imports by approximately 70 percent. From the Lincoln Administration until the Underwood Tariff of 1913, rates remained above a highly protectionist 35 percent on dutiable imports.

Once again, a Republican turned to trade policy to fix the economic distress of his time. President Herbert Hoover is often maligned for doing nothing during the Great Depression, but such statements represent a fundamental misunderstanding of his actual decisions. The argument could be made that Hoover did far too much, and through government action, he made the depression great.

Faced with a jobs crisis, Hoover and the Republicans tried to protect American workers from cheaper foreign competition by passing the Smoot-Hawley Tariff in 1930. The dutiable rates under the act were the second highest in the U.S. in 100 years, outpaced only by the Tariff of Abominations.

But Hoover’s intervention into the market inevitably backfired. Between 1929 and 1933, America’s wealth nearly halved  and the unemployment rate more than tripled from eight per cent to 25 per cent.

Selwyn Parker, a writer at the Foundation for Economic Education, chronicled just how counter-productive the government’s actions were.

The results were almost immediate. As global trade dried up, much of the world’s shipping fleet was mothballed and orders for new ships cancelled. Other major industries were affected – steel production, fishing, farming and manufacturing of all kinds.

An outraged Canada slammed tariffs on goods that accounted for 30 per cent of American exports. France, Germany and the British Empire followed suit, either turning to alternative markets or developing substitute manufacturing that would replace goods previously acquired from America – or elsewhere, since many other countries were erecting wall-of-death tariffs.

Smoot-Hawley’s effects were so damaging that criticism of the policy crosses ideological lines. Former Federal Reserve Chairman Ben Bernanke said “Economists still agree that Smoot-Hawley and the ensuing tariff wars were highly counterproductive and contributed to the depth and length of the global Depression.”

Regression to the Mean

On his official website, Trump clearly lays out his plan to return to the protectionist depression economics that define his party’s past. The President-Elect specifically calls for withdrawal from both the Trans-Pacific Partnership and NAFTA, and he has even floated the idea of a 20 percent tax on imports.

But yet, there are still some Republicans fighting for the preservation of the party’s Reaganite identity. “The effect of a 45 percent tariff would be when you go to the store, when you go to Walmart, when you are shopping for your kids, the prices you pay go up 45 percent,” Sen. Ted Cruz (R-Tex.) said in a debate against Trump. “A tariff is a tax on you, the American people.” 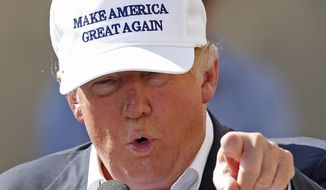 Trade policy is the perfect example of Henry Hazlitt’s principle of  “seen vs. unseen” enunciated in his seminal Economics in One Lesson. “The bad economist sees only what immediately strikes the eye; the good economist also looks beyond,” he wrote. “The bad economist sees only the direct consequences of a proposed course; the good economist looks also at the longer and indirect consequences.” While tariffs do not effect the average American in an immediate way, the import taxes come home to roost in the form of increased prices.

Republicans are now the party of higher taxes, but the shift is not as ironic as some claim. Trump’s protectionist leanings are simply a regression to the GOP’s historical mean.

Top 3 Reasons Libertarians Should Run for Office as Republicans

Why Your Future is in the Private Sector