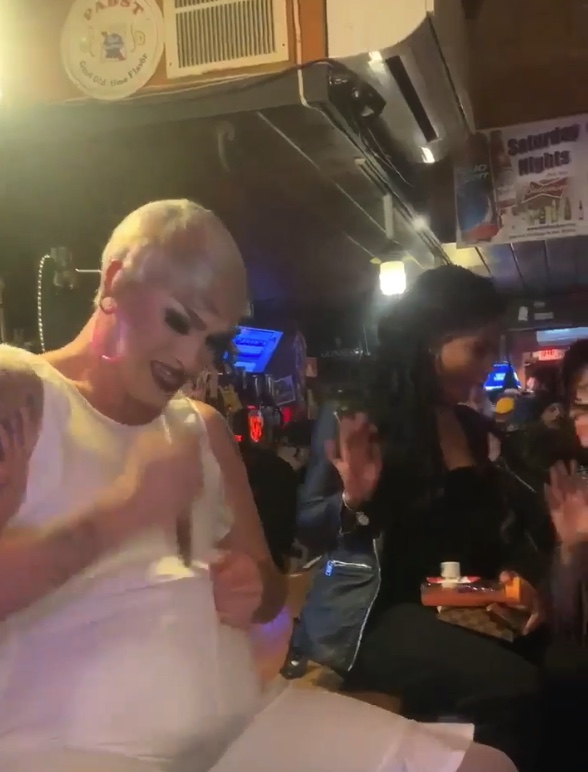 Warning: This article contains content some readers may find disturbing.

A viral video was posted to Facebook Wednesday in which a transgender female dressed in all and white, which was also costumed in a fashion to appear pregnant, removed a baby doll from herself after stabbing her “pregnant belly”.

The now-viral video, which was posted to Facebook by Eden Linton with the caption “We’Re nOt PrO-aBoRtIoN, wE’rE pRo-ChOiCe” has gone viral with 4k shares and 2k comments.

The video depicts a transgender female sitting on a bar in a Halloween costume, which makes her appear pregnant. She then begins aggressively stabbing her stomach with a knife until fake blood is covering her outfit, opening up the fake womb. The unnamed individual then proceeds to remove a babydoll covered in blood from her womb, licking the doll. She continues to dance around with something fashioned to look like fetal tissue and an umbilical cord wrapping it around her neck and drinking the fake blood. All of this takes place as the song “Cannibal” by Kesha blares loudly in the bar.

The lyrics to the song read in part :

“I eat boys up, breakfast and lunch
Then when I’m thirsty, I drink their blood
Carnivore animal,
I am a cannibal
I eat boys up, you better run

Use your finger to stir my tea
And for dessert I’ll suck your teeth
Be too sweet and you’ll be a goner
Yep, I’ll pull a Jeffrey Dahmer”

At the end of her dance, the unidentified transgender woman takes money from customers at the bar and stuffs it in her shirt.

The motivation for this stunt is unclear, but it appears to have been a protest of pro-life people, but whatever the motive and regardless of where you line up on the issue, I think we can all agree this was vile and repulsive behavior.