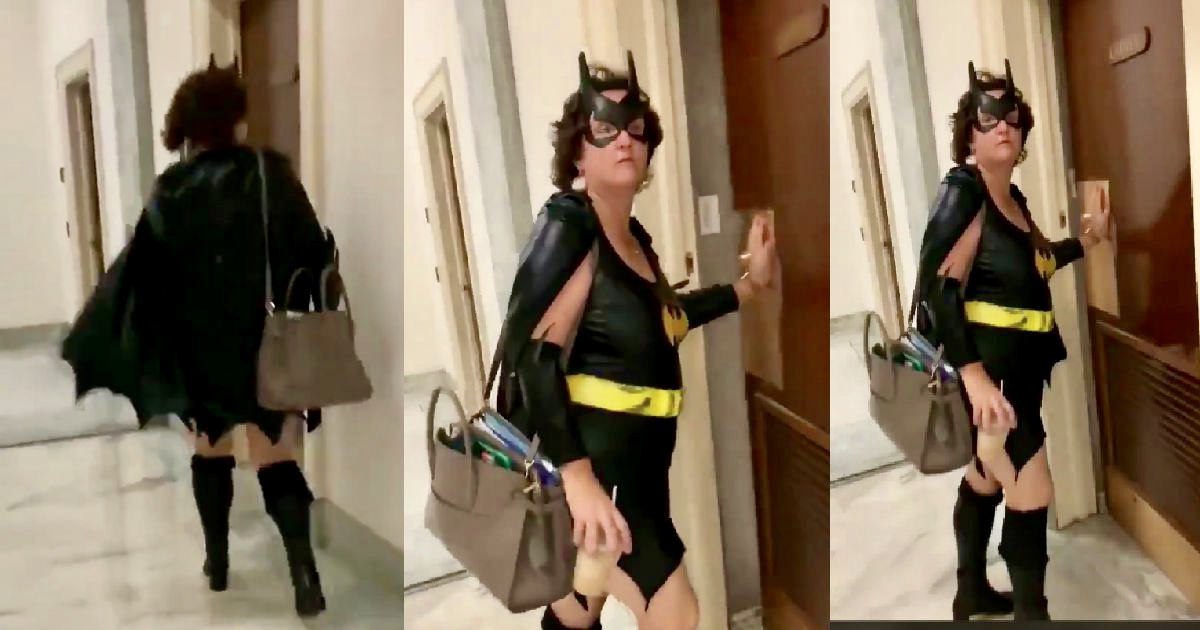 Rep. Katie Porter (D-CA) was roasted quicker than Pumpkin seeds for her choice of Halloween costume by a reporter who questioned her about her support of the Green New Deal Thursday.

In a video clip posted to Twitter by Jason Howerton of The Blaze, the Democratic Congresswoman was spotted on her way to the bathroom dressed in a Batgirl Halloween costume.

“If you return the Batmobile, could you pay for the Green New Deal?”

“Congresswoman Porter, does Alfred get minimum wage? If you return the Batmobile, can you pay for the Green New Deal?” asked the reporter as Porter is seen going into the bathroom, dropping her coffee as she closed the door.

LMFAO when she drops her coffee

someone tell me who took the video and asked the questions plz, I need to meet this legend

Twitter certainly didn’t waste an opportunity to play The Joker to Porter’s Batgirl as some of the responses were steamier than a witches cauldron.

🙀 Is Alfred gonna clean that up?

"Do they not offer bra fittings where you shop?"

What an easy opportunity to make herself relatable she just wasted.

Dude could have walked in the rest room and said he identified as a woman. That would have made this video funnier than it already is

What @RepKatiePorter THOUGHT see looked like, when in reality… pic.twitter.com/l7qT3XTBC3

One has to wonder if the Congresswoman’s refusal to answer this reporter’s playful banter in relation to her costume choice is an example of elitist arrogance? Either way, America can see that Rep. Porter’s choice of wardrobe is just about as scary as the world that Socialist policies like the Green New Deal would create for future generations of Americans.

The unidentified reporter’s questions certainly made a treat out for America out of Congresswoman Porter’s outfit. It’s pretty safe to say nobody wants to come with her to the bat cave.

Footage of Representative  Porter in action can be seen below.

No Credit Cards required to Avail EMIs on Mobiles