Top 5 Presidential Scandals of All Time

Both the Republican and Democratic presidential candidates at the moment are so scandal-ridden that it is hard to choose which of them would be more of a public-relations disaster for the presidency if the American public were gullible enough to vote them into office.

Donald Trump is a foul-mouthed womanizer, who we suspect is less than a stellar businessman, having gone bankrupt several times. In the good old days, a single bankruptcy would have been enough to send a man to debtor’s prison, and any gentleman worth his salt would rather commit suicide than admit to defrauding others by incurring debts that he could not possibly ever repay. But Donald Trump has boasted that his frequent bankruptcies are simply sound business practice.

Hillary Clinton is responsible for several openly acknowledged breaches of security during her tenure as Secretary of State, and she has been accused of  being responsible, through her negligence, for the death of Ambassador Stevens and foreign service operative Sean Smith in the 2012 Benghazi attack. Clinton is also widely feared for the way people connected to her and her husband Bill Clinton keep dying under mysterious circumstances in the wake of the many scandals that each has been involved in. It seems that this year, the two front runners  for the office of president are rife with scandal.

But we have had presidential scandals before, to be sure. Here are the top five. 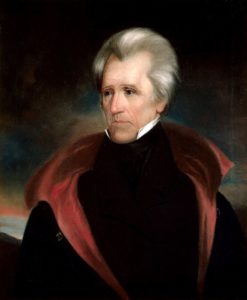 Democrats are often cited for presidential scandals involving affairs of the heart and womanizing, rather than financial misdeeds, which are traditionally the forte of Republican presidents.  As our first Democrat president, Andrew Jackson began the long tradition of scandalizing the American people by failing to live up to the standards of the Moral Majority in the area of marriage. But  it is worth noting that Jackson did many other things that violated the constitutional rights of Americans, and none of these was considered scandalous. For instance, during the Battle of New Orleans, when Jackson was a mere general, he suspended habeas corpus, instituted martial law, confiscated arms and other property from citizens and imprisoned members of the press and elected officials who dared to stand up to him about these violations of civil liberties. Though Jackson was fined for his bad deeds, he later contrived to get the American people to pay the fine for him, through an act of Congress.

Andrew Jackson was also responsible for the Trail of Tears in which he killed many native Americans by sending them on forced marches. That, too, was never considered a scandal. But when it turned out the Jackson’s wife Rachel had not been properly divorced from her first — abusive — husband before she and Andrew Jackson began to live together as husband and wife, this became a scandal of major proportions.

In 1791  Rachel and Andrew married for the first time. Rachel’s ex-husband then sued her for adultery. It was not until 1794 when her divorce was finalized, that Rachel was able to marry Andrew Jackson legally. Thirty years later, when Jackson was running for president, this suddenly became an issue again.

While Democrats are often accused of adultery, it is worthwhile to note how wholesome and innocent Jackson’s version of adultery actually was. He was never unfaithful to his wife. Nor was Rachel thought to have had some kind of clandestine affair. They were both living together openly in a committed relationship as husband and wife, when it turned out that the paperwork on her prior divorce had not been properly filed.  This pales in comparison to John F. Kennedy’s affair with Marilyn Monroe or Bill Clinton’s dalliance with Monica Lewinsky. That the American people found Jackson’s marriage to be more scandalous than the Trail of Tears is not a credit to our sense of right and wrong.

When other presidential scandals during Jackson’s administration broke along similar lines, in the Petticoat Affair, it is to Andrew Jackson’s credit that he stood by his cabinet member, John Eaton, the Secretary of War, whose wife was said to have been unfaithful to her first husband prior to his death.  The Petticoat Affair led to Jackson’s break with Vice President Calhoun,  so powerful was the ostracism that the second lady Floride Calhoun and all the wives of the other cabinet members undertook against Margaret Eaton and  her husband, the Secretary of War. Jackson, aware that the innuendo against Margaret Eaton was a replay of what had happened to his own wife during his election campaign, replaced Vice President Calhoun with Martin Van Buren, who was the only member of the cabinet to side with the Eatons. This eventually paved the way for the Van Buren presidency.

Open Letter to Republicans from a Concerned Father

Presidents Versus The Press: A Brief History