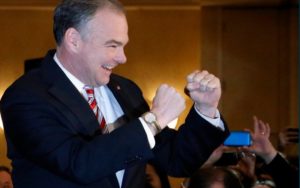 Democratic Vice-Presidential nominee Tim Kaine recently appeared in an interview with Katie Couric and Yahoo! News to discuss the upcoming debates, and current status of the presidential election.

During the interview, Couric brought up the topic of third parties, and the fact that in many polls, Kaine and his running mate Hillary Clinton were barely ahead of the Libertarian Party ticket of Gov. Gary Johnson and Gov. Bill Weld. Couric then pressed Kaine on how he would make a case to those voters who are considering voting for the Libertarians.

Not shockingly, Kaine used the old adage that we understand that the Libertarians can’t or will not win. He even used third party votes as as scapegoat for allowing the election of George W. Bush, and ultimately the reason the U.S. went into Iraq.

“The argument against the [third-party] ticket is, I think everybody knows they’re not going to win,” Kaine responded. “And the argument is the Al Gore-George W. Bush race in 2000. The third-party candidacy of Ralph Nader cost Gore electoral votes in New Hampshire and Florida, and if Gore had been president, we probably wouldn’t have had a war in Iraq.”

It can be tempting for dissatisfied voters to vote for an outside candidate as a way of making a statement, Kaine argued. But “casting a protest vote for a third-party candidate that’s going to lose may well affect the outcome and may well lead to a consequence that is deeply, deeply troubling,” he said. “That’s not speculation — we’ve seen it in our country’s history.”

Kaine’s statement is interesting to hear come from one of the major party tickets. Kaine, in his “case” for why voters should pick his ticket over the LP, does not suggest that they are a better choice, but merely equates the vote ascribed to a third party to a waste of time.

This would make sense as it is very hard to present a factual case on superiority as a ticket for president when the presidential nominee has faced numerous scandals involving her decisions as Secretary of State, questions about the money flowing through her “charity” foundation, and whose health appears to be “iffy” at best.

Then there is the fact that in 2008, when then-Senator Barack Obama was in search of vice-presidential nominee, Kaine’s running mate said Kaine was a “terrible choice.”

“I think it’s fifty-fifty whether he wins, right?” she said, noting that Obama’s VP choice was critical, giving the odds on whom would pick: “Biden, one-in-two chance. Bayh, one-in-four chance. Kaine and Sebelius, both which I think are terrible choices, one-in-eight chance.”

So again, it makes sense that Kaine wouldn’t campaign on his party’s “success” or “achievements.” He is diluted to feeding a narrative that both of the two major parties are responsible for, an active campaign to discredit a far better option as one who cannot win and should be considered a wasted vote.

If this is the only case the vice-presidential nominee of the Democratic Party has to defend himself from voters turing to the LP, he is very lucky the Committee on Presidential Debates (CPD) chose not to allow outside voices into the paradigm.

The Star of Harry Potter Thinks Hollywood Is Racist