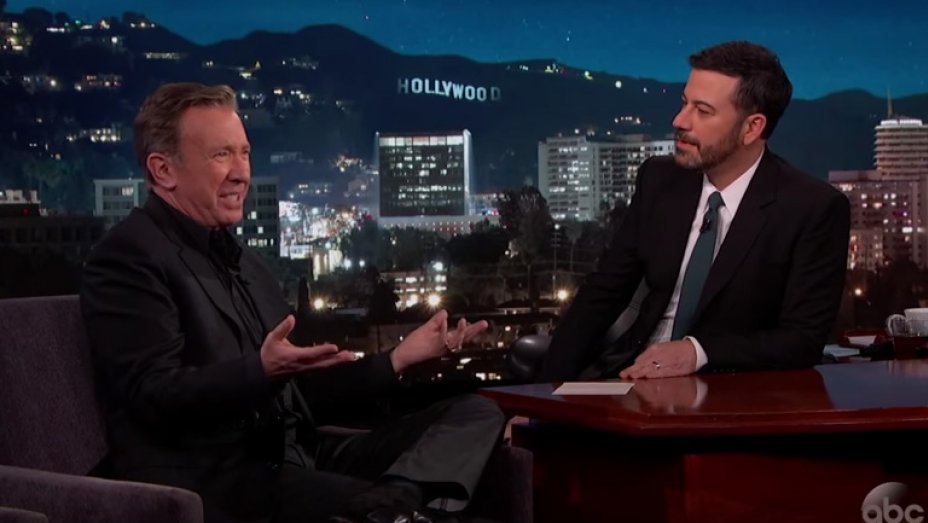 Being a conservative is like ‘1930’s Germany’ said Tim Allen on “Jimmy Kimmel Live” a few days ago.

On the bright side, it looks like comparing things to Nazi Germany is an equal opportunity dig now. Allen didn’t say Nazi, but you’ll read that he did. You’ll read that by being a conservative that he’s associated with White Supremacists or that he made homophobic comments.

Folks ain’t happy. “Allen’s line about 1930s Germany may have been tongue-in-cheek, but comments like that normalize the behavior of Trump’s more extreme supporters because it makes it seem like criticizing their beliefs is somehow worse than the dangerous and hateful things they believe,” reports the AV Club.

The 1930’s Germany comment which was quite obviously an offhanded joke, sits in stark contrast with most every comment I’ve seen from the left equating to the same comparison.

But that doesn’t matter does it? Controversy creates cash and this is the small controversy folks seem to be up in arms about today – for the next five minutes at least.

Allen plays a conservative character, Mike Baxter, on the show “Last Man Standing.” Baxter is a sort of Archie Bunker light character. Imagine, a reflection of the traditional 40+ male, confused and annoyed at a rapidly changing world, which is continually pulling the rug out from under him, and all he is used to.

The clip above makes some really good points, and is most importantly funny -as a sitcom should be.

Like his sitcoms, Allen was trying to be funny, as a comedian should be, when he made the Germany and Pride parade comments on a late night comedy show.

“Comedy is the ultimate Anarchist” said Allen some time ago. So it’s ironic that the majority of the comedy ‘establishment’ tends to subscribe to the same world view – primarily a liberal one. But Tim Allen has been at this game so long that he is certainly not afraid of being ostracized because of his views. Between those fat Toy Story checks and multiple drug arrests, Mr. Allen has nothing to lose by doing the one thing someone in Hollywood probably shouldn’t – being honest.

And now he’ll face the consequences. Watch the actual clip here, and then read the stories about it.

Liberals have no high ground here. They have called George W. Bush and Donald Trump “Hitler,” and they have said Mitt Romney would bring back segregation, among many other epithets they try to throw conservatives way. All the while being ignored by media for the comments, which are typically used in direct context, rather than in a comedic sense.

Additionally, Allen made a fun point during the interview that inadvertently illustrates the hypocrisy here. He said if you saw a government vehicle going around taking photos of your streets, your friends, and everything you know with a camera on top of the car, you’d freak out and be outraged.

If that car had emojis and a Google logo on it? You’d be excited.

It’s almost like if someone appears to be ‘on your side’ you’re willing to forgive transgressions you normally wouldn’t.

Regardless, just because you disagree with Tim Allen’s assessment, doesn’t mean his methods are unsound – it was a joke and harmless. Liberals do not own the patent on comparing things to Hitler.

Perception is the name of the game in almost everything, and unfortunately, despite the entirety of the interview being well intentioned and absent of malice, what the media will choose to harp on here is the one or two moments perceived as offensive, despite the fact it was said by a conservative who took a page out of the Liberal playbook.