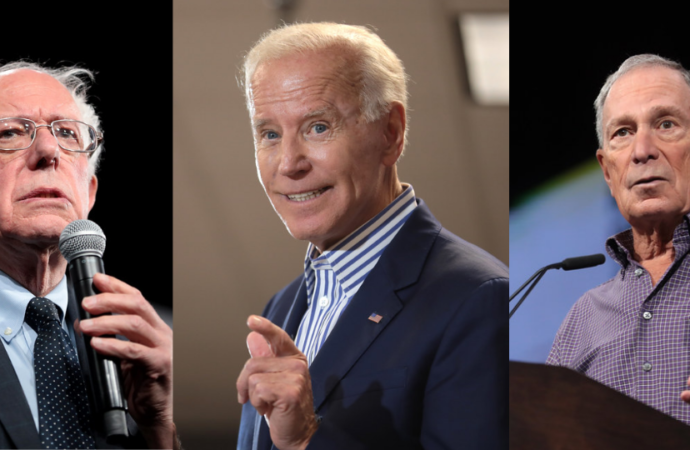 On Monday, Amy Klobuchar ended her campaign, leaving Joe Biden, Bernie Sanders, and Mike Bloomberg as the most prominent candidates remaining. Biden just scored a massive victory in South Carolina to give him 54 total delegates heading into Super Tuesday. The combination of Klobuchar and Pete Buttigieg dropping out cast him as the main alternative to Sanders, who sits in the lead with 60 delegates.

Bloomberg, on the other hand, has zero delegates; yet, that’s because he hasn’t appeared on any ballots thus far, which will change Tuesday. The billionaire has been spending heavy amounts of money on advertising in Super Tuesday states, and could see it pay off with some big results.

There are two other candidates still in the race: Elizabeth Warren and Tulsi Gabbard. Warren hasn’t won a single delegate since Iowa, and could even lose her home state of Massachusetts on Tuesday. Gabbard has won zero delegates, no doubt tied to her lack of inclusion in the debates for months. Both candidates would have offered Democrats a chance to back a minority as their nominee, as would Klobuchar and Buttigieg. But Democratic voters made it clear that they prefer the likes of Biden and Sanders.

It’s also worth noting that, with Klobuchar out of the race, Gabbard is now the only candidate who’s been a lifelong member of the Democratic party. Biden was an independent in the late 60’s and Bloomberg didn’t register as a Democrat until 2018. Warren was infamously a Republican for the first 29 years of her adult life, and Sanders, of course, has always been an independent.

So why does any of this matter? On a pragmatic level, it doesn’t. However, Democrats spent a good chunk of the past four years clamoring for young, progressive candidates that were minorities. It’s part of the reason why Alexandria Ocasio-Cortez and Ilhan Omar have gained such a following in the party. Some have accused Democrats of virtue signaling, and with the way things now look in the primary, that accusation appears to hold water.

The candidates they have embraced? Biden, Sanders, and to an uncertain extent Bloomberg. All of them are old. Biden is the youngest at 77 years old. They are all white. And Sanders is the “poorest” of these three with a reported $2.5 million fortune. For Democrats hoping for some sort of progressive purity test in 2020, this has to be a stark disappointment.

For all the grief that Democrats (appropriately) give Republicans for being monochromatic and predominantly male, it seems incredibly likely that they themselves will be offering up an old, rich white man to oppose fellow old, rich white man Donald Trump. Perhaps the Democratic party needs to assess their own diversity problems before casting stones at others.