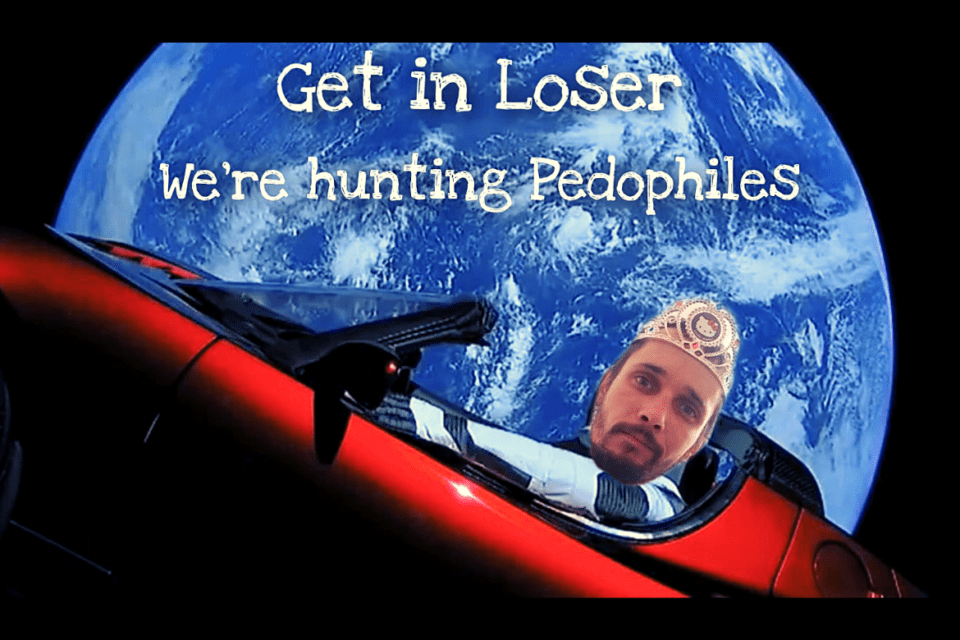 Some know him for his memes, others for his trolling skills—but Squiggly Line Guy is now using his platform and following to purge pedophiles from social media. He’s showing the world that pedo hunters are ‘better in Japanese’ with a big roundhouse  kick to the face.

Shumate: For our readers at The Libertarian Republic who don’t know about your personal crusade against pedophiles, can you tell us what started this whole thing and how you became known as a pedo-hunter?

SLG: Certainly. People who prey on children are the lowest form of human—if they can even be called that. My sort of “awakening” to the problem on Facebook began when a “Libertarian” named Sean Windingland went on Facebook Live to prove a disgusting point about “age of consent” where he obtained his young daughter’s consent to touch each other sexually. Apparently this wasn’t just proving some point. He had gaslit her into giving permission to be molested. Sean was sentenced to many years behind bars. Some pedos only get off with one year, and I have no idea why. It went from that to shaming people who argued philosophically that children can consent.

Shumate: My awareness of your desire to expose the evils of pedophiles on Facebook came when you did a piece on Cecil Ince the Former Vice Chair of the Missouri LP—fantastic work by the way—how long would you say you have been in the business of exposing pedophiles’ evil on Facebook?

SLG: March of 2019. That’s when the Sean Windingland incident occurred. Some people had philosophically come to his defense. I took them to town. I shared screenshots of their justifications for child abuse based on their belief that a child could consent to any such thing. This resulted in people disassociating from such bad actors.

Shumate: To that point, what would you say to the people, self-professed Libertarians in particular, who say that sex between an adult and a minor is morally acceptable as long as consent is acquired?

SLG: I would say that children are not capable of making such decisions, especially with potentially harmful consequences, whether physical, psychological, or financial. All of those are potential factors.

Regarding consent, not just in my state but in many states, mutual combat is legal. If two people consent to a fight in front of the cops, the cops cannot actually intervene. Of course, this doesn’t apply to adult vs minor. Should I be allowed to fight a 10-year-old if they agree to it? After all, most 10 year olds have more experience fighting than they do with sex. And I happen to be the polar opposite. Much more experience with sex than with fighting. If the question was really about consent, then this shouldn’t be a problem for those folks who believe a child can consent. So issue isn’t really about consent—it’s people who want to prey on children for sex.

Shumate: Many Libertarians talk a lot about the non-aggression principle. There could be a very strong case that pedophilia violates the NAP, so why do you think so many pedos are being exposed in supposedly libertarian circles lately?

SLG: I think there are a number of people who want to have philosophical arguments and choose a very poor hill to die on. Somehow they view themselves as intelligent or scholarly, making these uncivilized arguments. They may reference some “historical” tradition of some third world culture to justify their claims. I say that the term “historically” isn’t a very good qualifier for many things.

Some people argue it doesn’t violate the NAP. I argue it does. But then again, as Austin Petersen noted, neglecting your child or starving them doesn’t technically violate the NAP as it is not an act of proactive aggression. And this is why he always said the NAP is imperfect. Yet many Libertarians have since interpreted the NAP to mean that parental responsibility is required. I believe part of that parental responsibility is feeding your kids and not molesting them. And protecting them from molesters. And anyone who tries to sleep with a child is violating that.

But it’s still not an argument I’m very interested in, because this is one of those areas –  I simply don’t care about the NAP. I believe pedophiles will need to answer to God. It will be a very uncomfortable conversation. And I’m in favor of expediting that meeting.

Shumate: Your crusade has gotten you quite a bit of attention lately, both good and bad including a Facebook group of your allies in this cause and people attempting to get you banned from the platform can you speak to that controversy?

SLG: I have several friends that are aiding me in this cause. Some of the groups I find and call for mass reporting I find on my own. Others are sent into my inbox by others who know I have the traction. And they don’t want any of the potential retaliation associated with being the original poster, and are content with sharing my posts. So I have built a little bit of a network for getting this stuff out there. And it seems like it takes forever for Facebook to unpublish some of these groups. The worst I’ve seen here on Facebook was a group that shared PG-13 photos of children, where the photo caption was a serial number. In other words, the PG-13 photo was the cover photo of a set. And everything else in the set is exactly what you think it is. It took nearly 24 hours of mass reporting this group to shut them down. And when Facebook unpublishes a group, they still archive everything. In other words, it “freezes” all the photos and comments on their end. So it would be much more in their favor to do this, but it feels like pulling teeth with them.

Yet, despite the many screenshots I see from friends who receive messages back from their reports that the page “doesn’t violate community standards,” they were quick to freeze my account because someone reported my name as being fictional. Facebook nuked my account, and I’m currently awaiting for them to review my ID to bring it back. And yes, it was pretty clearly retaliation for my posts exposing pedophiles.

Shumate: It certainly appears that Facebook is at the very least tolerant of pedophilia, wouldn’t you say?

SLG: Facebook claims that they remove 99.5% of pedophilia groups and content. Yet, we manage to find a gigantic amount of that supposed 0.5%. So there are two conclusions that could be drawn from this. Either pedophilia has hit relative mainstream, which I doubt. Or Facebook is much more tolerant than they claim to be. And with as long as it takes to remove a group, receiving messages that they don’t violate community standards, my bet is that they’re tolerant.

Shumate: Given your current circumstances verifying the authenticity of your account, will this affect your activity on the platform or deter your mission in any way?

SLG: I think if my real name is used, it may prove as a little bit of a deterrent for me, just like having my name listed in Japanese phonetics was a little bit of a deterrent to being doxxed. Though Facebook only requires that you use a name you are called in real life, as opposed to your legal name which is what they seem to expect of me. And with my wife being Japanese and my kids being half, and being immersed in our local Japanese community, in real life I am often called by how my name phonetically sounds in Japanese. So yes, we are approaching a discrimination issue, as their conclusion would be that those people are not valid people.

Shumate: Will you push this if Facebook challenges your authentication?

SLG: I think I may if they force me to use my Anglicized name. I don’t think it would be a good look for them. And it would give a larger platform to explain how this all came about, giving Facebook more uncomfortable questions to answer.

Shumate: Is there anything you’d like to say in closing to your fans, to those who wish to sexually abuse children, and to Mark Zuckerberg and the people at Facebook about pedophilia being allowed on the platform?

SLG: Absolutely. To those who have reported the pages I’ve shared, and shared my posts— your reach extends my reach by light years. And I’m thankful for you.

To pedophiles or pedo sympathizers— while I do not believe electroshock therapy can alter a valid sexuality, I believe it can cure pedophilia if the voltage is high enough.

I don’t have anything to say to Zuckerberg. In fact, I should probably keep my mouth shut from here on out if Facebook forces me to Anglicize my name, and consider any possible recourse. I’ll plead The fifth on that for now.

Shumate: Thank you for sitting down with me, Squiggs, and may God be with you on your righteous endeavor.

We are indebted to the liberty movement’s favorite pedo-hunter Squiggly Line Guy, and it’s safe to say he will not rest until Facebook is purged of sexual crimes against children.

The reason why so many online marketers are turning to Instagram