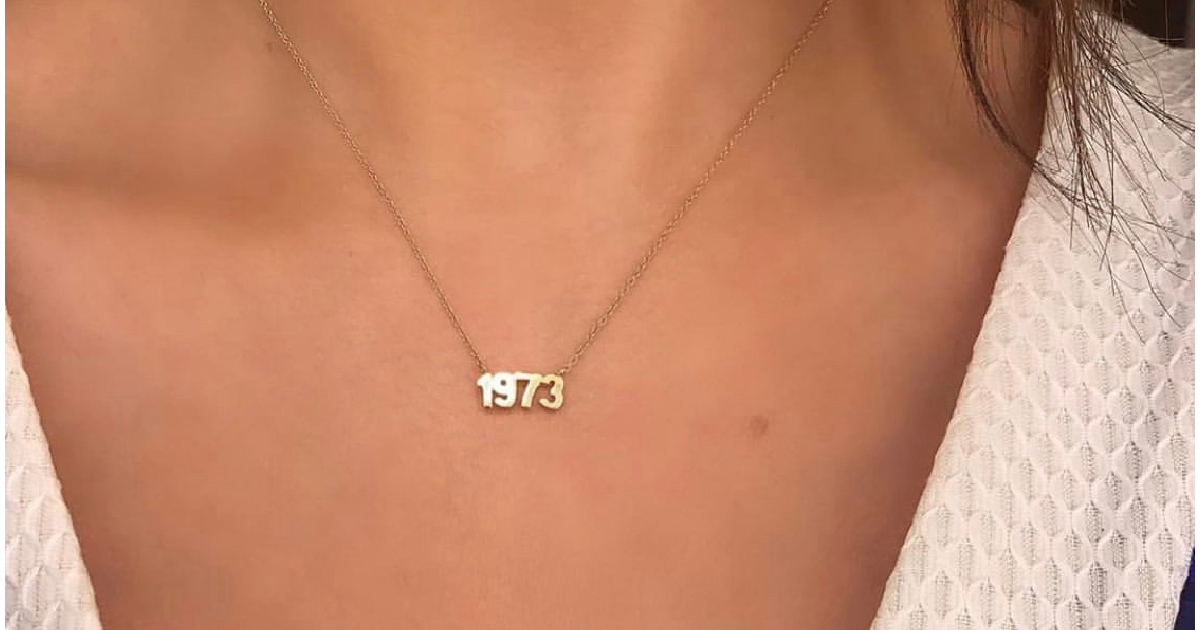 Pop singer Selena Gomez wore a 14 karat gold “1973” necklace from Sophie Ratner Jewelry in support of late-term abortion during a television appearance on “ Live With Kelly and Ryan.”, according to The Daily Wire. The necklace was specially made to commemorate the 45th anniversary of the Roe v. Wade Supreme Court decision.

@selenagomez wearing our 1973 necklace. Thank you so much for your support of women’s reproductive health and equal rights. 1973 is the year that Roe v Wade was passed and we worked with the amazing team at @prhdocs to create this necklace. Their organization receives 30% of the proceeds from each necklace. ❤️❤️❤️ @kateyoung

Proceeds from the jewelry, which has a $380.00 price tag, go to support Physicians for Reproductive Health. The jewelry company’s website says, “We’ve designed this 1973 necklace in collaboration with Physicians for Reproductive Health to commemorate the 45th anniversary of the historic 1973 Roe v. Wade Supreme Court Decision. 30% of proceeds will be donated to the organization to help them continue their important work. Please join your allies across the country and proudly wear this necklace to remind people everywhere that we must continue to fight for equality and access for reproductive health here in the United States, and throughout the world. Here’s to 1973, and all the fabulous women and men who helped make that groundbreaking decision of Roe v Wade possible. And remember, choice matters!”

Gomez has also made several posts in support of abortion on Instagram, and her decision to wear this necklace was yet another act of protest against the recent passage of pro-life laws in several states.

Usually I could care less about the opinions and beliefs of celebrities, but from time to time there are situations that require that their positions be confronted because, whether we like it or not, they do have quite a bit of influence on our world today. In some respects, I would argue they have more impact on society through the shaping of culture than politicians do by passing legislation.

The issue of being pro-life is not strictly a religious issue; it is a moral issue which affects our entire world. I feel I have a duty and moral responsibility, as someone who believes in the inalienable rights of life, liberty, and property, to speak up for the unborn children in the womb who cannot defend their right to their own life.

I would also like to point out that Selena professes to be a Christian. While I will not ultimately challenge the sincerity of her relationship with Christ, I will say that being pro-life is a foundational belief for Christians. I truly believe it is impossible to have a right relationship with God and support the killing of children or any other innocent human being. I say this as a man of faith myself. Given the fact that Ms. Gomez claims faith, I would like to point out that it is inconsistent with the faith she claims to so boldly support –  something the Bible teaches that God abhors.

Selena, you gave a very public testimony at the Hillsong Church conference in 2017, which I found very moving and quite powerful. I want to remind you that given your position in life, you have been given a tremendous platform to speak out for what is right in God’s eyes. I am not asking you to go around with a sign on your back that says “I’m a Christian” or to be corny about it, but God hates the shedding of innocent blood as Scripture tells us in Proverbs 6:16-19 (TPT) The Passion Translation,

“16 There are six evils God truly hates
and a seventh that is an abomination to him:
17 Putting others down while considering yourself superior,
spreading lies and rumors,
spilling the blood of the innocent,
18 plotting evil in your heart toward another,
gloating over doing what’s plainly wrong,
19 spouting lies in false testimony,
and stirring up strife between friends.
These are entirely despicable to God!”

It needs to be said that the abortion industry is guilty of all seven of these things! According to a 2018 analysis by the National Right to Life Committee, an estimated 60,069,971 abortions have been performed since the Supreme Court decided Roe v. Wade in 1973. That’s a lot of innocent blood that has been spilled in a relatively short amount of time considering the span of recorded human history. Planned Parenthood has also routinely lied that only 3% of their services are providing abortions, as the National Review pointed out was disproven by Planned Parenthood’s own 2017-2018 fiscal report. Not to mention that Planned Parenthood and its representatives regularly brag about their work with self-righteous arrogance.

Planned Parenthood supporters sing songs bragging about having abortions in 'fetus graveyard': “Stop, hey, hey, what's that sound, all the fetuses are in the ground!”

One supporter says: “What if we pissed in the fetus graveyard?”pic.twitter.com/pJZxHn6XbN

As the Body of Christ, we who bear the name ‘Christian’ have a responsibility to work to abolish this great evil, and protect the lives of both the unborn child and their mothers on whom the abortionists prey. All life is valuable to God and has purpose and meaning, as he said when he spoke to the prophet Jeremiah about his calling in Jeremiah 1:5, “ 5 Before I formed you in the womb I knew [and] approved of you [as My chosen instrument], and before you were born I separated and set you apart, consecrating you; [and] I appointed you as a prophet to the nations.”

Consider the fact that the Bible teaches that Jesus came to give us His life through his sacrifice on the cross, and the fact that Christ took an extraordinary interest in children when he scolded his disciples for trying to keep the kids from bothering him as he was teaching, saying it was better for someone to have a millstone tied around his neck and be thrown into the sea than to cause a child to stumble. It is plain to see here that human life is of ultimate value to God.

I would also like to share my story with you, Ms. Gomez, because as a man born with cerebral palsy, I think it gives me a unique perspective on this issue. Individuals born with “disabilities” are prime targets of eugenicists as I recently discussed with Austin Petersen on KWOS Radio  the importance of pro-life legislation in the state of Missouri and across the country. The “doctors” who perform abortions would have people like me killed. Who knows what would’ve happened to me if my parents weren’t Godly individuals who understood the value of my life, and prayed that God would keep me alive and promised to love me regardless of what condition I was in?

I want to tell you, Selena, that I consider myself a fan of your music, and have long been a defender of yours against busybody Christians who have unrighteously judged you for what they see as grievous sins. I do not condemn as many have, and I pray for you as I can only imagine the pressure you are often under given the nature of your career. I want you and every other professing Christian who believes it’s morally acceptable to take the life of an unborn child to know that my words do not come from a place of hate, but a place of true love and genuine concern. I want to encourage you with both the words of Christ himself as well as the Apostle Paul.

Jesus said in John 17:5-19 (AMPC) Amplified Classic Edition
5 And now, Father, glorify Me along with Yourself and restore Me to such majesty and honor in Your presence as I had with You before the world existed.

6 I have manifested Your Name [I have revealed Your very Self, Your real Self] to the people whom You have given Me out of the world. They were Yours, and You gave them to Me, and they have obeyed and kept Your word.

7 Now [at last] they know and understand that all You have given Me belongs to You [is really and truly Yours].

8 For the [uttered] words that You gave Me I have given them; and they have received and accepted [them] and have come to know positively and in reality [to believe with absolute assurance] that I came forth from Your presence, and they have believed and are convinced that You did send Me.

9 I am praying for them. I am not praying (requesting) for the world, but for those You have given Me, for they belong to You.

11 And [now] I am no more in the world, but these are [still] in the world, and I am coming to You. Holy Father, keep in Your Name [[a]in the knowledge of Yourself] those whom You have given Me, that they may be one as We [are one].

12 While I was with them, I kept and preserved them in Your Name [[b]in the knowledge and worship of You]. Those You have given Me I guarded and protected, and not one of them has perished or is lost except the son of perdition [Judas Iscariot—the one who is now doomed to destruction, destined to be lost], that the Scripture might be fulfilled.

13 And now I am coming to You; I say these things while I am still in the world, so that My joy may be made full and complete and perfect in them [that they may experience My delight fulfilled in them, that My enjoyment may be perfected in their own souls, that they may have My gladness within them, filling their hearts].

17 Sanctify them [purify, consecrate, separate them for Yourself, make them holy] by the Truth; Your Word is Truth.

19 And so for their sake and on their behalf I sanctify (dedicate, consecrate) Myself, that they also may be sanctified (dedicated, consecrated, made holy) in the Truth.

Paul also tells us in Roman 12:2, “Do not conform to the pattern of this world, but be transformed by the renewing of your mind. Then you will be able to test and approve what God’s will is–his good, pleasing and perfect will.”

I am certain that preserving the value of life is in His perfect will, and that all life is precious and impossible to put a price on. Some would say that my life is living proof of this fundamental truth, I will tell you that part of the reason I’m so passionate about freedom is because there are people in this world who would seek to deprive me and others like me of our life and individual liberty.

I want to extend a personal invitation to you Selena and anyone else who is willing to listen, to reach out to me on Twitter or Instagram in the hope that we may have a productive, fruitful conversation. I am always willing to listen.