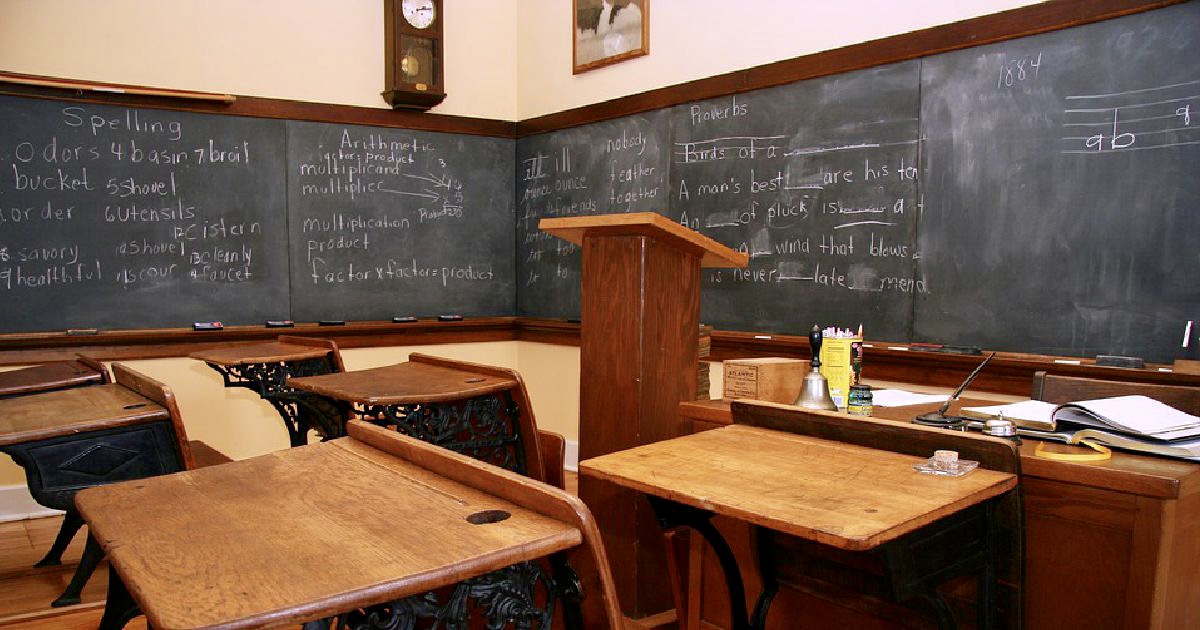 The system is reflexively left alone while the methods are the bad ideas that get cycled in and out: open concept schools, multiple intelligences, project-based learning, universal design for learning, merit-based pay, vouchers, charters, and most recently, educational neuroscience. Every decade or so we are told by the pedagogic experts that they have found an answer to our school’s problems. The trouble is, they’re looking right past the problem.

The problem is the monopoly that schooling has gained over education. According to the National Center for Education Statistics, approximately 97 percent of kids go through traditional schooling (as opposed to homeschooling or unschooling), and just over 90 percent of those attend government schools. That is to say, there is basically one accepted way to educate kids today: school them.

Given the relatively poor performance of American students on international achievement tests, you would think schooling might receive a second look. Quite the opposite, actually. It is instead made mandatory, and taxpayers are forced to subsidize it. This begs the question: Why would the government continue to propagate a system that produces such questionable results? The answer lies in their motives, and their motives are best understood by reviewing a brief history of compulsory schooling.

The earliest ancestor to our system of government-mandated schooling comes from 16th-century Germany. Martin Luther was a fierce advocate for state-mandated public schooling, not because he wanted kids to become educated, but because he wanted them to become educated in the ways of Lutheranism. Luther was resourceful and understood the power of the state in his quest to reform Jews, Catholics, and other non-believers. No less significant was fellow reformist John Calvin, who also advocated heavily for forced schooling. Calvin was particularly influential among the later Puritans of New England (Rothbard, 1979).

Considering compulsory schooling has such deep roots in Germany, it should be no surprise that the precursor to our American government school system came directly from the German state of Prussia. In 1807, fresh off a humiliating defeat by the French during the War of the Fourth Coalition, the Germans instituted a series of vast, sweeping societal reforms. Key within this movement was education reform, and one of the most influential educational reformers in Germany at the time was a man named Johann Gottlieb Fichte. Like Luther before him, Fichte saw compulsory schooling as a tool to indoctrinate kids, not educate them. Fichte describes his aim for Germany’s “new education” this way:

Then, in order to define more clearly the new education which I propose, I should reply that that very recognition of, and reliance upon, free will in the pupil is the first mistake of the old system and the clear confession of its impotence and futility.

But actual education is an organic process and requires free will; this was not an attempt at education. Schools were to be factories that would churn out the type of obedient, compliant workers the state preferred. Here’s Fichte again explaining the desired interaction between teachers and students:

[Y]ou must do more than merely talk to him; you must fashion him, and fashion him in such a way that he simply cannot will otherwise than you wish him to will.

Fichte understood full well that a statist vision could most easily be realized if governments were given kids’ minds early on:

Education should aim at destroying free will so that after pupils are thus schooled they will be incapable throughout the rest of their lives of thinking or acting otherwise than as their schoolmasters would have wished … When the technique has been perfected, every government that has been in charge of education for more than one generation will be able to control its subjects securely without the need of armies or policemen.

If such a totalitarian vision were quietly isolated in Germany, or even Europe, it might be of very little consequence. But it would be this Prussian model of control-by-schooling that 19th-century American politicians would bring to our nation—and the one that is still with us today.

Referred to as the first great American advocate of public education, Horace Mann embarked on a journey to Europe in 1843 to evaluate national school systems. He toured several western European states, but Prussia left the most impressionable impact on him (see his 7th Annual Report of the Board of Education, 1843). Once back in the United States, Mann began to lobby heavily for a taxpayer-funded government school system that largely mirrored that of Prussia’s.

Mann was no ordinary, grassroots American activist; he was an extremely influential public figure. He had been a part of the Massachusetts State Legislature, he was the first secretary of the Massachusetts Board of Education, and he later became a United States congressman. He had enormous reach. In short, Mann’s influence worked. His “common school movement,” as it would be known, began to spread across the Northeast, with government schooling taking root in Massachusetts, New York, Rhode Island, and Connecticut.

By the end of the decade, all states had public schools. Unsatisfied with forcing taxpayers to fund a government school system, Massachusetts also wanted to force everyone to go. What good would an organized system of indoctrination be if people could simply ignore it? They instituted the first compulsory attendance laws in the 1850s, and neighboring states began to follow suit; by the end of the 19th century, 34 states had compulsory school laws.

By 1918, they all did. Over the decades, the number of years kids were forced to go to school slowly increased, as did the number of required school days per year. Fines and penalties would be imposed nationwide for school truancy. Within decades, the federal government passed the ESEA, which thrust the national government into education and shortly thereafter established a federal Department of Education. Mann’s vision for a truly national school system would be realized just a little over a century after his initial visits to Prussia.

It is impossible to discuss, or even understand, the failures of our school system without understanding its origins. The motivations were not pure; they were never to educate. That need not be speculation—it is directly from the mouths of the reformers themselves. The objective was to nationalize the youth in a particular mold.

From Luther to Fichte, the idea to use the coercive power of the state to force kids into schools and indoctrinate them was clear. Horace Mann became instrumental in importing this system and helping it spread throughout the United States. Attempts to reform this system amount to an incredible waste of time and resources; discussions of reform are a waste of breath. The system is rotten at its foundation and must be abolished completely.

Mike Margeson is a high school social studies teacher in Indiana; he has 15 years experience in the classroom. He holds a bachelor’s in Political Science from UC Irvine and a master’s from Butler University in educational administration. He is currently working to co-author a book, Failure: The History and Results of a Broken School System.

This Is How a Nationalist Raises Your Taxes

School is Back in Session! It’s Time to Drop Out.