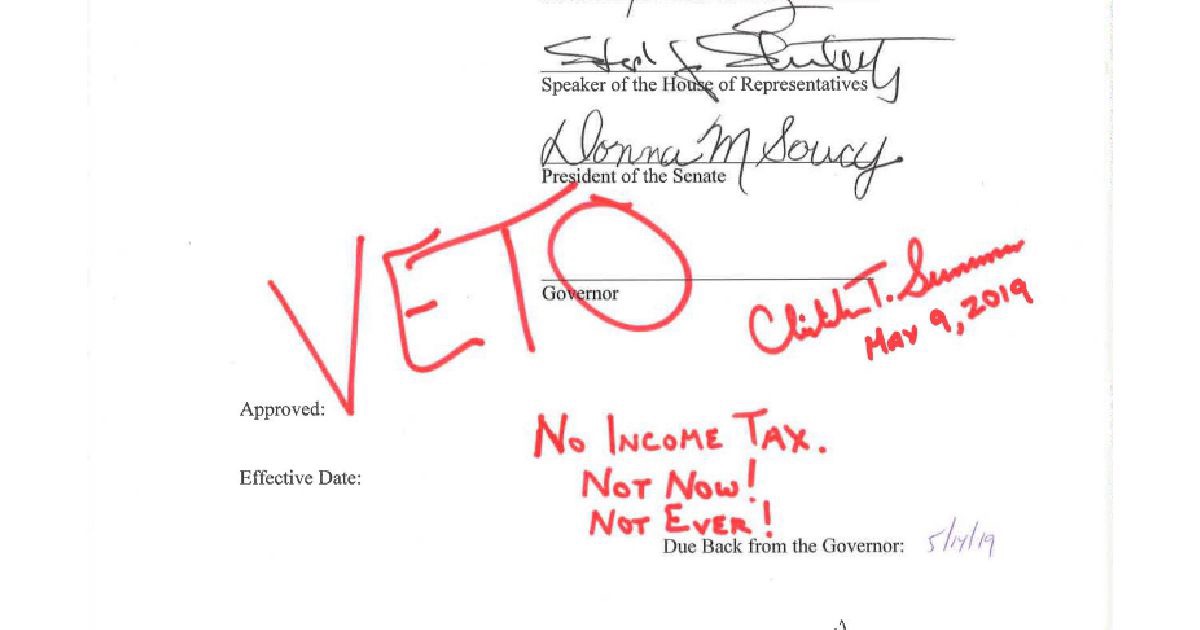 In bright red, all capital letters, New Hampshire Gov. Chris Sununu slapped a big “VETO” on the Democrat-controlled Legislature’s bill to implement a tax on workers to pay for a government-administered paid family leave program.

Alongside his signed and dated veto, Sununu, a Republican, wrote: “No Income Tax. Not Now! Not Ever!”

The Democrats’ solution to paid leave — Senate Bill 1 (SB1) — is an income tax and make no mistake, the people of New Hampshire do not support that approach. Today, I unequivocally VETOED the Democrats’ income tax. pic.twitter.com/sJDJzugW9i

New Hampshire is one of only seven states across the U.S. that does not impose a state income tax on its residents.

By vetoing the bill, Sununu protected New Hampshire workers from a 0.5% tax that would have cost the average worker $267 per year.

That tax would have gone toward a government-mandated paid family leave program providing workers with up to 12 weeks of paid family or medical leave covering 60% of their wages.

In reality, covering the leave that workers say they need would require about five times the proposed 0.5% rate ($1,333/worker). To date, paid family leave taxes in other states have stayed below 1% of pay, but that’s largely because the programs lack awareness and accessibility. In New Jersey, only 1% of workers who were eligible for the program actually used it.

That’s important because when the government sets the rules—instead of letting employers and workers design policies based on their own terms—a paid family leave program is far more likely to have unintended consequences and excessive costs.

When the government sets the eligibility criteria and instills the notion that paid family leave is free, far more people are likely to take leave. That has real consequences for employers and the products and services they provide.

Those unintended consequences are why Sununu and other policymakers are looking for ways to expand access to paid family leave by giving workers and employers more options instead of higher taxes and more restrictions.

Sununu and Vermont Gov. Phil Scott, a fellow Republican in a neighboring state, have a proposal that would let workers and employers choose whether or not they want to opt into a state-established but privately administered paid family leave program. The estimated cost would be $200 to $285 per worker per year.

Another way to accomplish the equivalent without the state getting involved at all—and thus saving taxpayers potential startup and administrative expenses—would be to allow private employers to band together to form so-called association insurance plans covering short-term disability or paid family leave plans.

This structure exists, with limitations, for association health insurance plans.

Another option, at the federal level, is to pass the Working Families Flexibility Act that would let lower-income hourly workers choose whether they want to receive time-and-a-half of paid leave or pay when they work overtime hours.

Congress could also let workers tap their retirement savings accounts without penalty to use for paid family leave.

A combination of options that makes it easier for employers to offer paid family leave and easier for workers to take it is the right approach, because a one-size-fits-all government program simply cannot meet workers’ and employers’ needs in the way that programs designed on their own terms can.

Rachel Greszler is research fellow in economics, budget, and entitlements in the Grover M. Hermann Center for the Federal Budget, of the Institute for Economic Freedom, at The Heritage Foundation. Read her research.

Republished with permission from The Daily Signal. The original article may be read here.

The History and Results of America’s Disastrous Public School System, Part I