Recently, the Dallas County Commissioners voted to extend their “Safer At Home” order until May 15. Dallas, which is the most densely populated and second most populous county in Texas, has taken additional measures past those mandated for the state as a whole given it’s risk of becoming a hotspot for the COVID-19 pandemic.

As part of these types of orders, decisions have been made by government in deciding what is or isn’t essential, and what is or isn’t an acceptable level of allowable risk. State and local governments have been making hard choices, generally between two sets of awful options with limited knowledge about what to expect. The trade off has been described, depending on one’s thoughts of what it entails, as a difference between lives and livelihoods, or lives and money, or between lives and lives.

For one local business owner, Shelley Luther, this forced shutdown became too much. If she followed the law, she had to make her own choice… between paying her mortgage or keeping her business. So she made a choice to not follow the law, and to illegally reopen.

Today, her salon looks much different than it once did. There are more customers, given her shop is the only one in the county currently running. Some are sitting outside, socially distanced from one another, while Shelley goes out with a mask and gloves to take their temperatures before letting them inside. 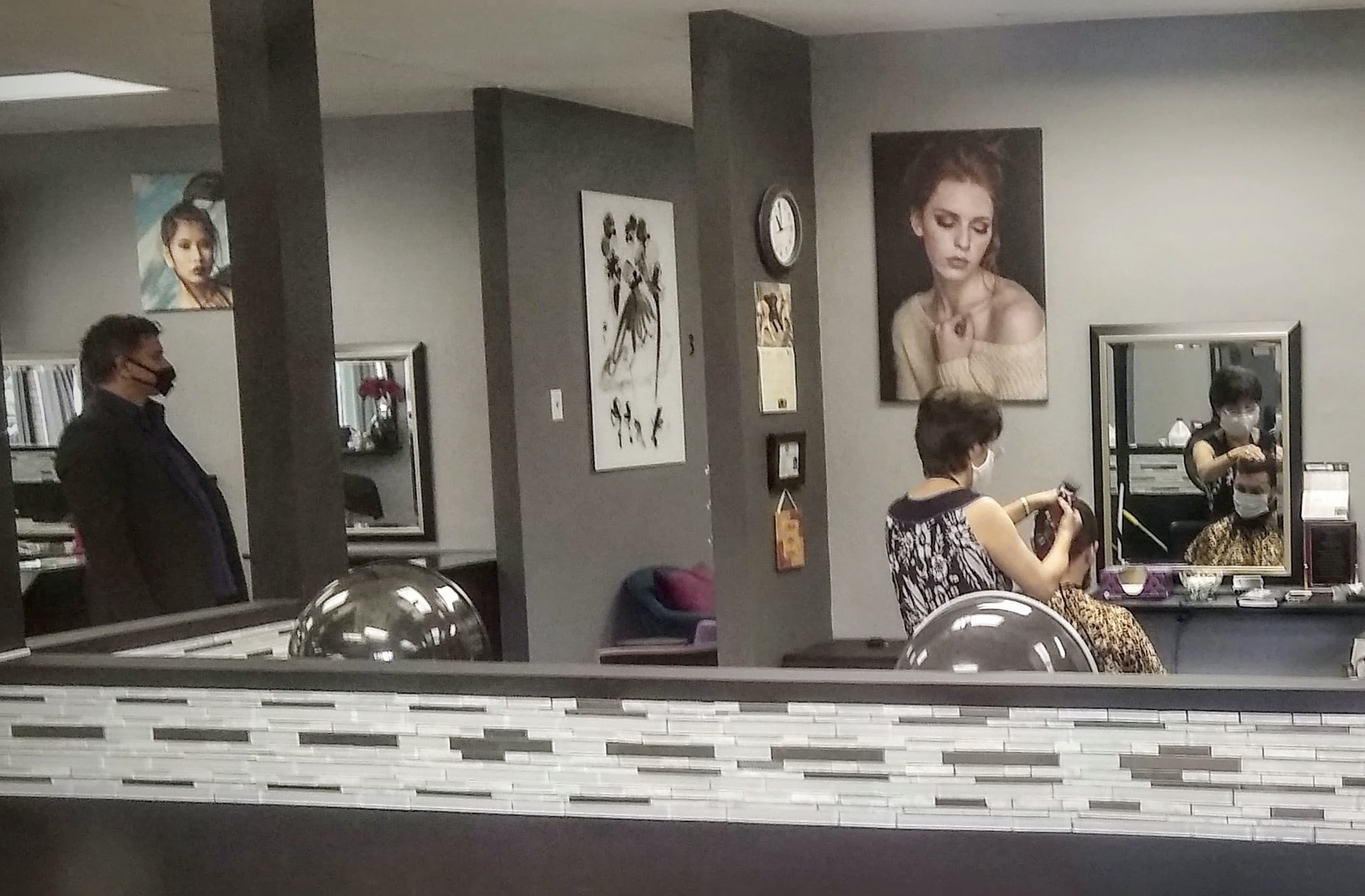 Oh… and then there’s the group open carrying rifles right outside her door.

Given the current national debate, a story involving openly defying stay at home orders to give literal haircuts against the law with the support of an open-carrying anti-government group, well… I had to reach out and talk to her and them.

“TLR: Dallas County has a stay at home order, an order that you’ve chosen not to comply with.

TLR: You said that even if you’re fined or jailed, your salon will remain open.

SL: It will remain open.

TLR: Can you tell me why you’re not complying and what you expect the consequences to be?

SL: I am not complying because it’s against the Constitution to keep me from making money for my family and for my stylists to be making an income.

TLR: Your argument is that it goes against freedom of assembly and due process?

SL: No. I mean, they’re they’re actually allowing people to come out and do those things, but it’s definitely due process and the… they do not have the right. It’s like the pursuit of happiness. It’s all of our civil rights that they’re violating by shutting down the salon, not giving us any governmental help, and expecting us to be able to feed our families.”

Are stay at home orders unconstitutional? Well, they haven’t been ruled so yet. The Supreme Court, during a smallpox epidemic, allowed for greater restrictions than one might expect under the 1st or 14th amendments (among others), including mandatory vaccinations. However, if enough people defy these stay-at-home orders and receive actual penalty, it does make it more likely that SCOTUS could revisit the issue or at least the courts could put the specifics through a strict scrutiny test if it seems to conflict with enumerated rights.

“TLR: You currently have people outside your business who are open carrying rifles. Why?

SL: Oh, I don’t know. That’s their choice, I feel like it’s part of them showing their freedom to open carry and it all kind of goes hand in hand as far as freedom. But I don’t have any kind of say in what those guys do.

TLR: Do you welcome their support?

So what are they trying to accomplish?

The group in question calls themselves “Don’t Comply”. They’re best known for an annual event where they provide food, clothes, and blankets to the homeless while well-armed. Why armed? Well, as one member who helps organize the event, Murdoch Pizgatti, puts it,

“It is illegal to feed homeless people if you don’t jump through all the hoops and licenses. So we come down here well armed because we’re not going to let anyone stop us.” Essentially, they intentionally carry guns to protests because they believe that such a show of arms is a deterrent to police interrupting their events.

Their “PR director”, Matthew Short, described the overall aim of his group to me this way:

“Don’t comply is an organization that is driven by the NAP, and defenders of it too. We don’t comply to laws or edicts from tyrants. We do freedom. We believe in the natural rights of man, and live by them.”

A common dismissal of many of those who have attended the recent “Open Up” protests across the nation is that the protesters by and large don’t seem to be social distancing or wearing masks. Meaning, it’s hard for them to make the case that some of the restrictions they are opposing are unnecessary because people will take reasonable precautions voluntarily, when they seem unwilling to do so at events they hope will be well attended.

However, that doesn’t seem to be the case at Salon A la Mode.

“TLR: It sounds as though while your business does operate, you’re wearing masks, social distancing, taking temperatures, and taking a lot of reasonable precautions. How seriously do you personally take COVID-19 as a public health threat?

SL: I definitely feel like it’s a real thing. But I don’t think that we as Americans should completely stop our lives because of it. There’s definitely different precautions and different social distancing and things like that, that we need to be more aware of and maybe be a little bit more responsible because we do know that this exists. But it definitely does not mean that we have to shut down our entire lives and our livelihood and hide from it.

TLR: Back before everything was shut down, about how many customers tended to be in your salon at one time?

SL: Before COVID? Well, our stylists have their own individual business. So usually it’s by appointment only, and my booths are already pretty socially distant. The stations are already six feet apart anyway. And they had one client coming in at a time. We actually didn’t have very many walk ins before all of this happened. So the social distancing inside the salon was actually pretty good.

TLR: Who is your salon essential to, and do you see a greater risk for those coming into your salon than going to other businesses which Dallas has allowed to stay open?

SL: I think that our salon is one of the cleanest public facilities that anyone can go to. I don’t know if you know about salons and Cosmetology license, but they go, you know, to for two years of school, half of that being about sanitation and hygiene. And I can guarantee that most of the workers in the “essential businesses”, obviously besides hospitals, and dentists offices and things like that… They are nowhere near to having the knowledge that my stylists have about hygiene and making sure that people stay safe.”

One thing that struck many at the salon seemed to be what distinctions were made on what is considered essential. The salon is located in a shopping center, next to a dog grooming business that has been allowed to stay open as an essential service. Meaning, of course, that the law recognizes dog grooming as more essential than services provided by the salon.

Many have dismissed valid concerns of some “Open Up” protesters across the nation by saying they selfishly “just want a haircut” rather than having valid fears about their ability to pay their rent or mortgage or feed their children without income coming in. Are haircuts essential? Well, they are to hair-stylists if they’re relying on that work to feed their family. They are to people that own hair salons. They are to the children of those workers.

Much of Shelley’s frustration seems to be based on a lack of access to government assistance at a time government isn’t allowing many individuals and businesses the ability to assist themselves. Many people haven’t received their stimulus checks, and the unemployment lines have been overloaded to the point that many can’t get through.

“TLR: What has local government done the most wrong, and how could they be handling the pandemic better in terms of what rules they put in place?

SL: Well, as far as the local government, I would say the Texas Workforce Commission is just a mess. And it’s not helping enough people right now when we need it. And they definitely needed to make that a bigger priority. Two, the government, local government, they’re all looking at each other and don’t know who’s in charge. And because this situation is so unprecedented, they don’t know how to handle it and they don’t know the consequences. And, honestly, they are in conflict with each other about their beliefs. Which makes it a muddy situation for us as well.”

Only time will tell whether these lockdowns across the nation are worth it. Whether they flatten the curve and prevent hospitals from being overloaded, minimize hotspots, and whether combating the disease is worth whatever final cost we pay. But for many small business owners like Shelley, there simply doesn’t seem to be the time to wait in order to find out.

You can view Shelley’s speech at a rally, starting at about 16:00 in this Facebook live video: