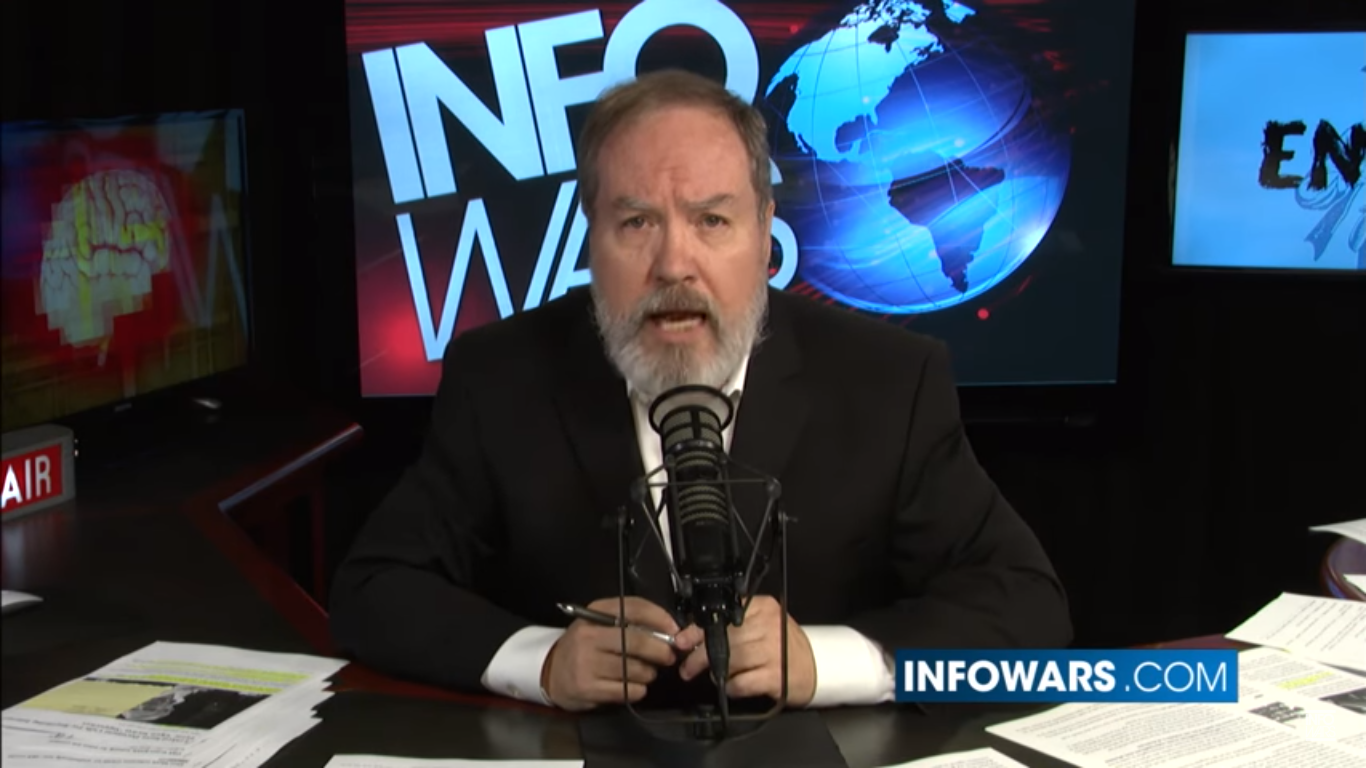 Infowars is Misguided on Johnson

Libertarians had some legitimate concerns last week when it seemed Libertarian Party Presidential Nominee Gary Johnson reversed from being pro-choice on vaccinations. This finally caused Johnson’s first real negative media blitz, especially after being described as “Honest Johnson.” This led to Johnson having to clarify his position. It turns out he is for mandatory vaccinations only in the event there is a spread of some kind of virus you might imagine in the zombie apocalypse.

After many libertarians were relieved from their brief legitimate concerns, the Alex Jones Channel on YouTube uploaded a video. The video uploaded yesterday and is titled: “Tell LP Candidate: ‘Get Your Laws Off My Body.'”

The video is an Infowars.com news segment for The Alex Jones Show. It starts off with the reporter, David Knight, talking about an article written by USA TODAY, also published yesterday morning with the headline: “Gary Johnson: Election cycle is so ‘crazy’ he may win.” Regarding Johnson saying he can win the election if he gets into the debates, Knight says, “It could be, but I don’t think so. I really don’t think so once people understand where he’s coming from.” Grab a hold of something, because we’re about to journey into a little wild ride with where Knight claims Johnson is coming from.

Knight spent the first 3 minutes of the video introducing the fact he is going to talk about Gary Johnson, then he went to break. The break was only a very brief pause in the video, but he jumped straight into talking about Obamacare, Hillary Clinton, Dr. Mary Ruwart, and Donald Trump for an entire 12 minutes of the 26 minute video.

Knight kind of started his libertarian theory binge at around the 11:35 mark. He said any libertarian or conservative would love Trump’s healthcare reform policy plan. He went on and described how it would “allow us” to have tax deductions. It took a whole a few seconds before that theory would’ve been debunked, as most libertarians prefer a flat consumption tax and are completely turned off by continuing income taxing.

When finally re-opening the discussion about Johnson after 12 minutes on other topics, he correctly explained how hard it can be for candidates to get on all 50 state ballots and that that is one of the ways the duopoly keeps the election rigged. He also believes that Gary Johnson should be allowed to debate for accomplishing that, because he claims the polls are “controlled” as well.

Then he bounces around from saying Johnson just wants to get 5% of the votes so the Libertarian Party can begin getting federally funded, to suddenly claiming they also probably made some sort of deal with Hillary Clinton. Why does he have a theory there’s a secret deal with Clinton? “Because these two guys will never say anything bad about about Hillary Clinton. It’s absolutely amazing. They giver her a pass on everything,” explains Knight.

Johnson has criticized Clinton’s foreign policy in the past and below is a video of him criticizing her record of engaging in “Pay to Play” (beginning at 9:12):

After sharing that theory, Knight says he’s ready to talk about the ‘real issues’ of mandatory vaccination. He then pulls up an article from The Libertarian Republic, published 4 days prior. He must not have updated himself on the topic he’s talking about, as a more recent updated article was also published by The Libertarian Republic just 3 days ago, reporting on how Johnson clarified his comments while remaining pro-choice on the matter of vaccinations.

Regardless of not being up to date on the news of the real issue at hand, Knight makes another sudden theory leap. He quickly grips onto the phrase “Pro-choice” in the conveniently older article concerning vaccinations and says:

And what’s this rant about shutting down homeschooling? Wouldn’t it be hilarious if libertarians make Facebook posts asking how many of their libertarian friends agree with an Infowars Reporter that they want to shut down the power of every American family to choose whether or not homeschool should be a choice? I haven’t heard much of that theory going around about libertarians before.

He then goes on to slaughter Johnson and Bill Weld‘s slogan to introduce another wild libertarian theory by saying, “I’ve heard this phrase many times from the Libertarian Party, ‘We got to get government out of the bedroom and out of the boardroom.'” Um, it’s “pocketbook,” sir.

The ridiculous report doesn’t even stop there. Knight continues his rant:

Again, it seems he is going off on some out-dated information. Bill Weld is quoted with regrets of past stances against assault weapons, and clarifies he now stands with Johnson on the Second Amendment in an article by Reason:

I am a lifelong hunter and gun owner. In 1993, however, as Governor of Massachusetts, I went along with some modest restrictions on certain types of firearms. I was deeply concerned about gun violence, and frankly, the people I represented were demanding action. Sometimes, governing involves tough choices, and I had to make more than a few.

Today, almost 25 years later, I would make some different choices. Restricting Americans’ gun rights doesn’t make us safer, and threatens our constitutional freedoms. I was pleased by and support the Supreme Court’s decision in the District of Columbia vs. Heller — a decision that embraced the notion that our Second Amendment rights are individual rights, not to be abridged by the government.

Isn’t there something wrong when you have to pay a fee just to even ask permission to exercise the right to bear arms? What if a right was denied when some secret agent man made a mistake somewhere and attached the wrong name to the wrong person on a bad list that resulted in a denial of that person’s right? Isn’t it also a violation of rights to deny someone due process? How can a possible mistake be corrected quickly if an error was made if you can’t even face your accuser and find out why your name was on that list?

Remember when a U.S. Senator was accidentally put on a watch list? With all his connections, it took him 6 months to get the matter fixed to be permitted to exercise his right. Imagine how hard it would be for average people with no such connections. Do you call that a right or a privilege? Right or wrong? Would you simply excuse away negative answers to those questions or realize there’s something wrong with that process and toss the bad idea? Gary Johnson does not support blocking your Second Amendment rights. Here’s Gary Johnson on supporting your Second Amendment rights (starting at 25:25):

The remainder of the video was on yet another article topic and then advertisements. In total, the subject of Gary Johnson was only 8 1/2 minutes long out of the 26 minute video. I’m sure the title of the video deserves a more fitting title for such little coverage on the Libertarian Party Presidential Nominee himself. After being a little more enlightened, what title would you have given Knight’s video report?

Jackie Robinson: “I cannot stand and sing the anthem. I cannot salute the flag”