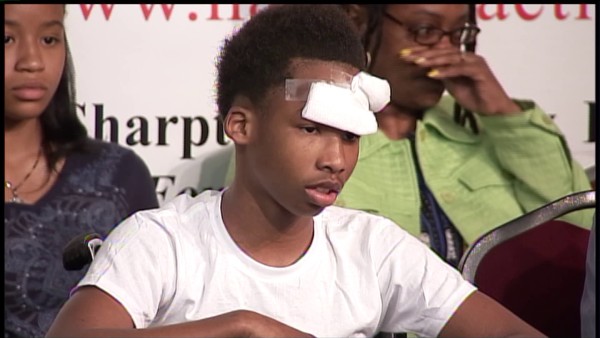 BRONX, NY–Javier Payne, 14, was with a friend last week when they asked a 49-year-old man for cigarettes. The two grew irritated when they were denied with one punching the man in the head, while the other hit him with a backpack. They ran off, but the older man flagged down a patrol car and led the police to the boys.

The two teens were handcuffed outside a Hookah shop, and shouted out an obscenity at the police sergeant. That was when the sergeant apparently lost control and pushed Javier’s head through the shop window. Leonard Goodwin, a witness from across the street, said he saw the sergeant’s expression change after he realized what had happened.

“It wasn’t done like he was trying to throw a kid through the window,” Goodwin stated to the NY Times. “It was like a freak accident.”

Regardless of the sergeant’s intent, the resulting injuries left Payne bleeding profusely from cuts to his face and chest. His lung was punctured, and the teen began to go pale in the face as he struggled to breathe. Police held paper towels to his wounds and called paramedics, yet failed to identify the call as a pediatric emergency, instead using a protocol for drunks.

Paramedics arrived and were initially stopped by police from taking Payne’s handcuffs off to treat him. One medic likely saved the boy’s life by holding his chest wound closed as they rushed him to the hospital.

Officers charged both of the suspects with resisting arrest, obstructing governmental administration, and assault. While Payne’s actions were by no means exemplary, his charges are similar to those who have accused the police of brutality in other cases. The unnamed sergeant is now being heavily criticized, and Al Sharpton’s recent involvement is likely to escalate the situation. However the case turns out, the sergeant proved through his actions last week that he has all the self-control of a teenage boy. Like Payne’s unruly behavior after being denied a cigarette, the unnamed sergeant lashed out with physical violence over a slur uttered by a teenager.

Payne is now Al Sharpton‘s latest media darling, and the sergeant has been bumped to desk duty. He’ll remain there pending an Internal Affairs Bureau investigation, but as is often the case, cops rarely get fired for physical violence, even when it’s explicitly intentional.

“You got to stop this, you got to put a stop to this,” she said. “We’ve got to stand up for ourselves, for our children. We’re human. We have rights. My kid has rights, too.”