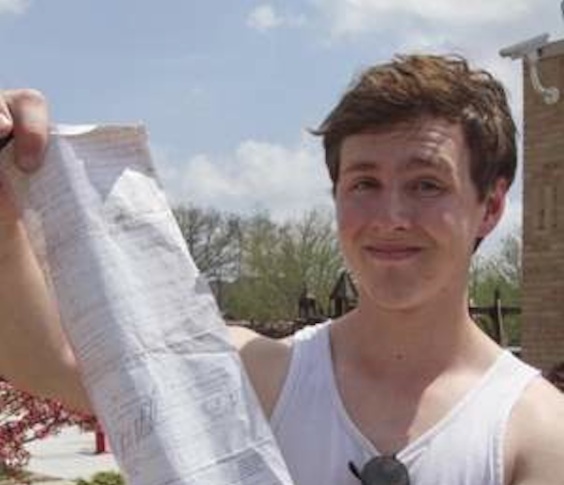 BRIGHTON, CO–Colin Andersen, 19, was kicking back with friends in a parking lot near a playground when his group was approached by the police. Andersen’s friend was given a ticket for skateboarding, and the group was asked to leave the area.

Andersen became agitated at that point. “[T]hey were asking all of us to leave because he got a ticket,” Andersen told the Daily Press & Argus. “That’s not fair. We’re just standing around.”

Frustrated by the injustice of it all, Andersen said what a lot of us only think when reprimanded by the police over minor infractions. “This is f—— bull—-t.”

It was then that the officer gave Andersen the first ticket he’s ever received. Despite Andersen’s claim that no children were nearby and he had cursed under his breath, Brighton Police Chief Tom Wightman said teens misbehaving downtown is an ongoing issue.

“We’re going to be watching,” the Chief vowed, although no one reported the teens were being disorderly until the police arrived. Wightman admits there are no laws prohibiting certain words, but Andersen still lost when he fought his ticket. He told the Livingston County District Court magistrate that he did not deserve the ticket and had done nothing wrong, but was fined $200.

The harsh penalty is upheld by Wightman, who views it as a way of protecting the city’s children. According to the police chief, Andersen’s language was disturbing the peace. “Older teens and young adults who choose to ‘hang out’ near the children’s area need to know that their conduct will be carefully scrutinized.”

Andersen continues to believe he was merely exercising his freedom of speech, but concedes that civil liberties are suspended when dealing with most police.

“It’s a bad idea to argue with cops.”