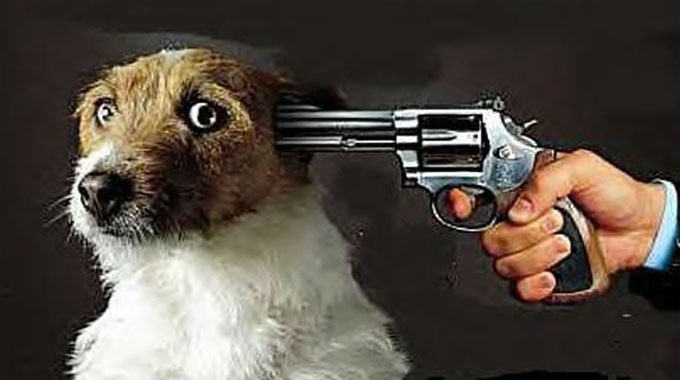 Police killings of family pets on the rise

In a time of outrage over police shootings of unarmed suspects, mainstream media has a tendency of overlooking other egregious acts of authority overreach occurring right under our collective noses. The public, seemingly desensitized to much of the human on human violence occurring across the country, fails to clearly see what the American police state is also doing. Despite desensitization to violence, one act of aggression never fails to elicit outright public rage- intentional harm to animals.

It’s happening more than we realize.

Let’s examine the statistics from a recent article put out by The Ron Paul Institute:

No database exists at local, state, or national agencies, making the actual numbers elusive.  However, PDP is on a mission to track pet fatalities at the hands of police. 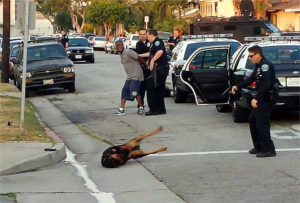 According to the Washington Post, police shootings of dogs has become an epidemic, prompting the Animal Legal Defense Fund to put out a guide  to dog owners with tips on how to best protect dogs from being shot.  Justifiable reasons do exist for police shootings of dogs, such as perceived threat or actual threat to an officer, prompting self-defense. However, much like the controversial police shootings of people creating outrage, one is left to ask when the line has been crossed with animal shootings.  Take under consideration the following stories of police overreach:

NYPD police officers responded to a non-emergency call in a Bronx apartment building. Upon hearing the police in the hallway, the caller’s neighbor opened the door to investigate.  Her pit bull sauntered out, tail wagging, and was met by an officer’s drawn handgun. This video of the scene shows the dog being promptly executed point blank in the head.

Police in Hollywood, Florida are being sued after forcefully raiding the wrong apartment, killing Missy, a pit bull that raced toward the door upon their entry. The terrified animal was shot not once, but six times. The Sun Sentinel reports the reaction of the dog’s owner, Wilson Almendarez. “She was my baby. She was everything to me. She did not deserve to die like that. This dog was very loving.”

In another instance of entering the wrong home, DeKalb County police stormed in on a Georgia family, opening fire on Yanna, the family’s boxer.  Yanna was fatally shot, and all three officers involved in the incident were placed on administrative leave.

In Missouri, a SWAT team entered a family’s home, killing the family’s pit bull, Kiya.  The reason for raiding the home: to investigate whether the tenants had electricity and natural gas services.

A Louisiana police officer was indicted on killing a Maine man’s Labrador and Golden Retriever mix, Arzy. The dog’s owner was arrested on trespassing charges, and while cuffed, the officer searched the man’s belongings, situated next to the leashed animal.  Shooting the dog dead, the officer claimed the animal nipped at him. A witness testified that the dog did not aggress, and the officer resigned shortly thereafter.

Dutchess, a bulldog mix, was shot and killed in front of her family’s eyes. The incident at the Florida home was caught on this surveillance video. The officer approached the family’s door to inform them of an open car door. He was placed on administrative leave.

Two police officers entered a Hartford, Connecticut home investigating an erroneous tip about weapons in an abandoned car on the property. The family’s St. Bernard, who was playing fetch with its 12-year old owner, gave chase to the invaders, resulting in a shooting death within sight of the child.

These are just a handful of stories detailing the wrongful deaths of family pets at police hands. Animals and humans face a similar plight when involved in police violence. Officers can easily claim that the situation was threatening, but without credible witnesses or video evidence, justice is not easily served.  Yet, when the situation is reversed, the penalties are swift and steep.  Take for example the consequences of harming a police animal.

In this Washington state legislature, the crime of harming police animals carries a class C felony, with a civil penalty of up to ten thousand dollars.  Fines and punishment are similar across the country.

What can a citizen do to combat the wrongful injury or death of a family pet at police hands? The Animal Legal Defense Fund offers some advice on their website.

Our pets deserve life, liberty, and justice, too. 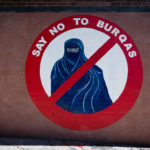 Consequentialist Liberty: Freedom Wins When You Ban The Burka